The Unheard Gender: The Neglect of Men as Social Work Clients 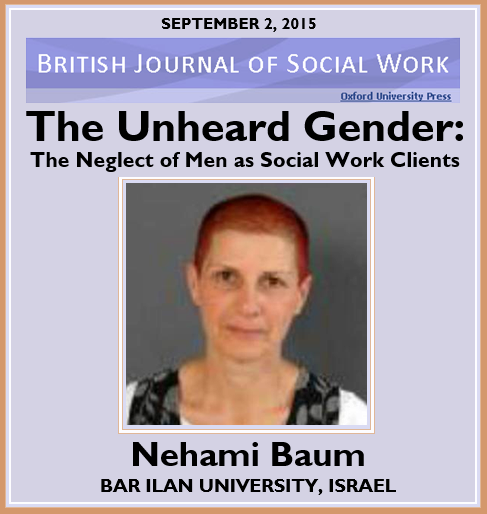 You’ve head about the male suicide epidemic, right? Here’s how you can understand the fact that men struggling with serious depression usually do not get help ESPECIALLY when they seek it from “helping professionals.” (No, the reason is not that which is expressed in the popular man-hater formula, “toxic masculinity.”)

An important survey of the professional literature:

EXCERPT: Various factors contribute to social workers' neglect of men. One is that most social workers are women and find it easier to work with women, whose outlook and language are usually closer to their own. . . .  In few if any social work courses are men — their needs, their gender-related ways of manifesting and coping with distress, and interventions specifically geared to them — an inherent part of the curriculum.

To right the imbalance and address the needs of men, social work must, first of all, acknowledge that men have unique problems, needs and unique ways of manifesting their distress (e.g. Baum, 2003). The principles are the same as with any underserved population. In the absence of sufficient knowledge, research is required on men's needs and problems (e.g. Guterman and Lee, 2005), as well as on effective ways of offering and providing help to men so as to increase the chances that they will accept it (e.g. Osborn, 2014).

Moreover, to establish a good helping relationship with their male clients, it is essential that female social workers take account of the possible effects of the gender of the two parties.

Abstract: An ontological view of conceptualizing the world that women are more important than men may create a male gender bias which gets trapped in and blurs the epistemological lens of how one sees the world. .. . .

The difference for women is that the helping institutions have implemented mandates to encourage women and predominately entailed women listening to women (Turner, 2011). The problem a male client may encounter during the helping process may be based on his gender (Baum, 2015; Smithers, 2012). 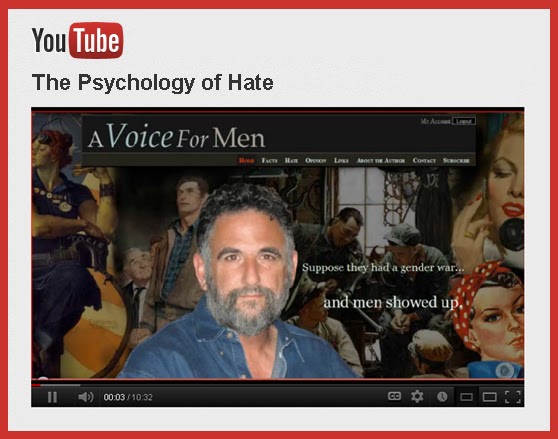 “The Psychology of Hate,” by Paul Elam from A Voice for Men Radio.

Here’s an important new article about the “empathy gap” ---

“Published under a pseudonym, it was written by a mainstream journalist who encountered significant push back and refusals when he tried to have it published in more mainstream channels. Thus he turned to A Voice for Men, where the facts matter more than the narrative.”

EXCERPT: Males in the U.S. die by suicide so much more than females that the rate is an astounding 3.5 to 1, or 78 percent of all suicides. That equates to once every 15 minutes. …

Yet the professional response to this is one of neutrality. The website for the American Foundation for Suicide Prevention (AFSP) has comparative graphs of suicide by state, age, and even race, yet none for gender. There is no mention of gender beyond the 3.5 statistic, and no section discussing male suicide. Even in its opening video on the front page there are no men, save a few in the background of a crowd. There is similar sparse acknowledgement from the American Association of Suicidology (AAS) and the Suicide Prevention Resource Center (SPRC). The SPRC has an underdeveloped section about men in their “populations” tab. … [continued]

***
ALSO: This articulate and crucial 28 minute talk on the overlooked facts of male suicide. 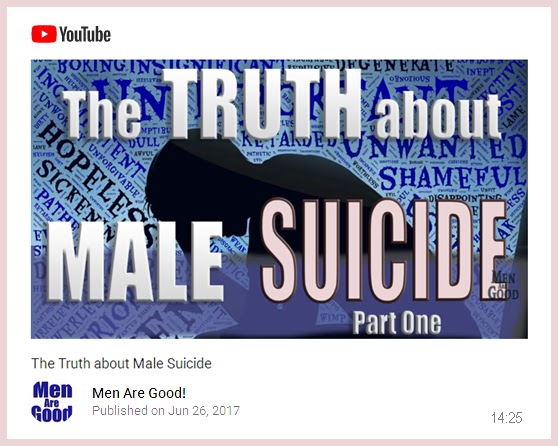 BEING MALE IN A FEMINIST CULTURE

ABSTRACT: According to our dominant cultural narrative, men in western societies are privileged and powerful, and have used their power throughout history to oppress and control women. Men's own accounts of their experiences, however, tell a very different story. They highlight how it feels to believe, with justification, that one is unwelcome--even despised--in one's own society. Such stories of alienation must no longer be ignored. We can keep on telling men that when they articulate experiences of powerlessness and injustice, they’re really just bitter about sharing power with women, but the sting of the injustice will not thereby diminish. We can keep on showing men that if they object to the feminist story, a massive arsenal of shame will be unleashed upon them, but that will only increase men’s anger and withdrawal.

Robert Estephe’s note: "Feminism" is a political ideology, not an objective depiction of reality, therefore the term "feminist" should never be confused with feminine or woman-orirented.

Email ThisBlogThis!Share to TwitterShare to FacebookShare to Pinterest
Labels: Misandry