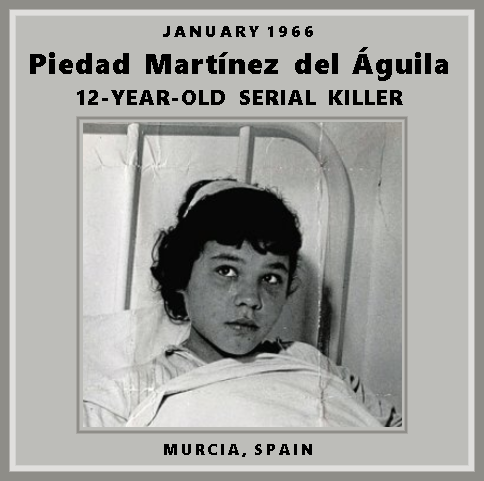 [Robert St. Estephe] – In the household of a Spanish working-class family with ten children, the daytime head of household was 12-year-old Piedad Martínez del Águila. In July 1965, her mother became pregnant with an eleventh child. By December young Piedad had become frustrated at having to run the household and work on the family’s cottage industry: polishing chrome metal parts, while her mother attended to tasks of cooking for twelve. The girl missed being able to play and see her friends. She decided to kill the youngest children, the ones who required the most attention from her. So, she poisoned them, starting with the youngest in series by increasing age. Little Piedad used chlorine tablets used for cleaning chrome combined with potassium cyanide rat poison, which she dissolved in milk.

The first to die was 9-month-old Mari Carmen on December 4, 1965. The cause of death was thought to be meningitis. Marino (2) died December 9, 1965 and Fuensanta (4) died on Dec 14, 1965. At first, it was thought there was a bacterial or viral epidemic afoot. The surviving family members we examined at the hospital.

The viscera of Andrés and Fuensanta are sent to Madrid for analysis by the National Institute of Health, the presence of any virus is not found, so they are sent to the Institute of Toxicology and the remains of the children to the Forensic Anatomy. In the remains poison was discovered: potassium cyanide and chlorine, each of them lethal toxins. The parents were suspected and sent to institutions for psychiatric observation. They were released so the family could be home together for Christmas. A week later 5-year-old Andrés was dead.

Once police discovered Piedad was in charge of her younger siblings’ care and feeding, they began to suspect her of the crimes. A police inspector succeeded in manipulating Piedad into confessing. He invited her out to a cafe and bought he a glass of milk. He pretended to pour a tablespoon of chloride into the glass of milk. The girl, first laughing and then angry, prevented him.

Piedad – “Don't do that, you can hurt someone a lot.” At the insistence of the investigator to drink, he flatly refused.

Inspector – “Hurts? Is it like what you gave your little brothers?” The little girl's contorted face spoke for itself. The policeman managed to persuade Piedad to talk about the mysterious deaths.

Piedad – "It was I who killed all four." The first three by order of my mother.

Inspector – “And the last?”

Piedad – "I killed him alone, on my own initiative."

Over the next few days, Piedad explained how she prepared the poison. She chopped some tablets with which he cleaned metal and mixed them with rat poison she found in the house. He made small balls and mixed them into the milk she served her younger siblings. The lethal cocktail killed quickly. Each was dead in half an hour.

She was placed in a mental hospital. There she continued to blame her mother, making up five different false narratives of the crimes. Newspaper reporters were allowed to interview her. She admitted he motive to an El Caso reporter: "I wanted to go out and play with my friends and I couldn't. I always had to take care of them.

On January 25, 1966 Piedad convicted of the killings and sentenced. As a minor, she consigned by the Juvenile Tutelary Court.to the The Monastery For Wayward Young Women Of The Oblates Of Murcia (El Monasterio Para Jóvenes Descarriadas De Las Oblatas De Murcia). There Piedad dedicated himself to knitting. She was said that he was sweet, happy and eager to play. No records of Pilead ‘s later life have been discovered.

Dec. 14+, 1965 – viscera of Andrés and Fuensanta are sent to Madrid for analysis by the National Institute of Health.

Dec. 24, 1966 – all living family members examined in hospital; nothing discovered; discharged in time for Christmas at home.

Jan. 25, 1966 – the prison order for Piedad convicted and sentenced. Being a minor, she was confined in The Monastery For Wayward Young Women Of The Oblates Of Murcia (El Monasterio Para Jóvenes Descarriadas De Las Oblatas De Murcia), by order of the Juvenile Tutelary Court.

1978 – Piedad's older brother, who three months earlier had murdered a taxi driver after robbing him.

OTHER FAMILY MEMBERS (who were not poisoned), 10 children:

late 1978 – 15 inmates, including the brother, escaped from Murcia prison after digging a tunnel.

“I wanted to play with my friends and I couldn't” - said Piedad at the age of 12, who got tired of taking care of her three younger brothers and killed them in the space of a month. 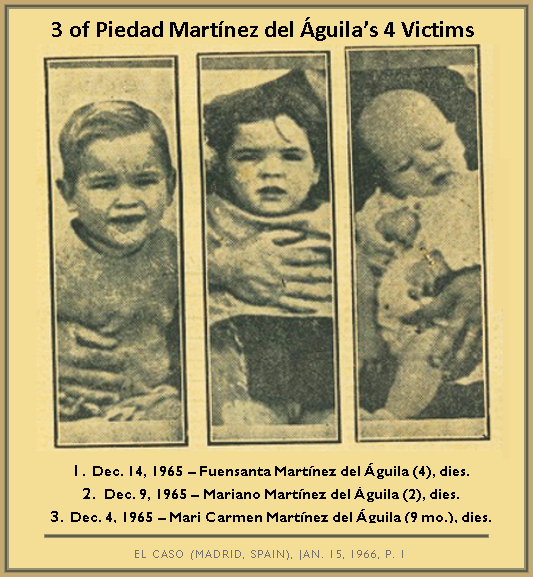 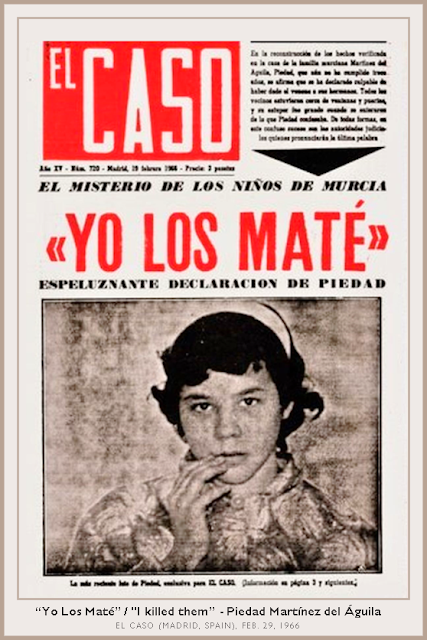 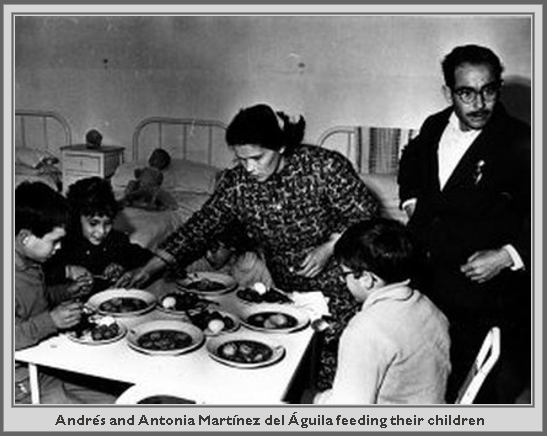 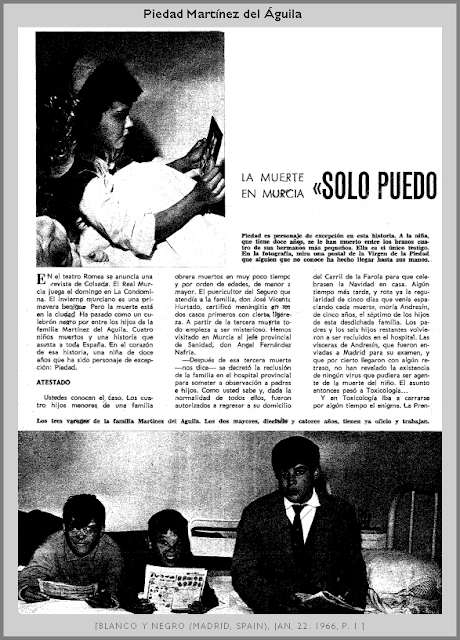 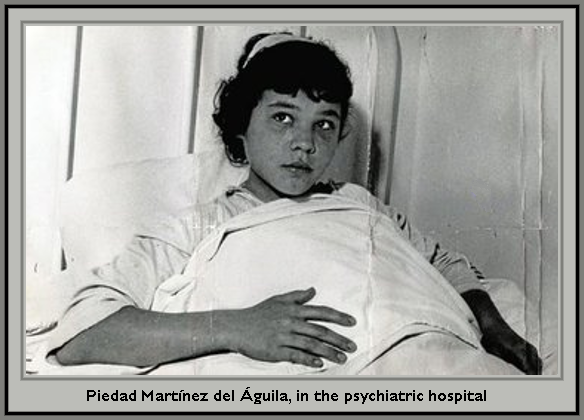 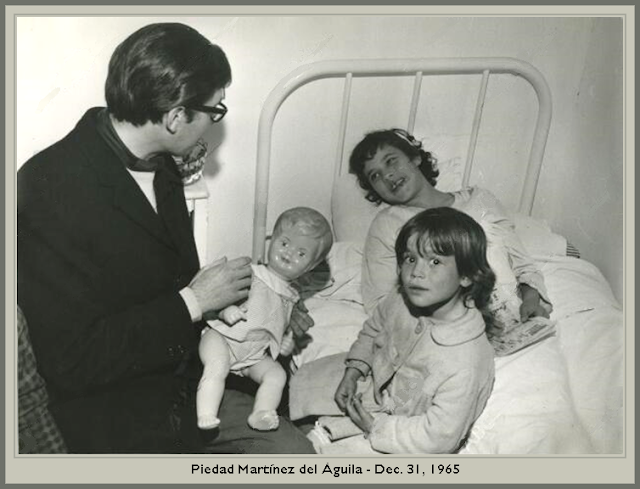 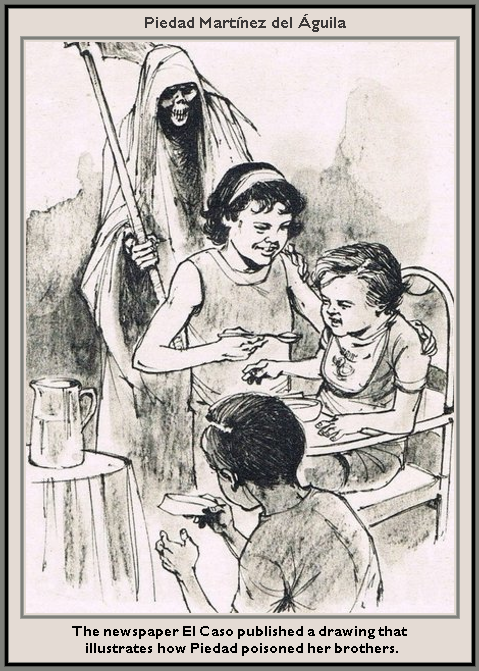 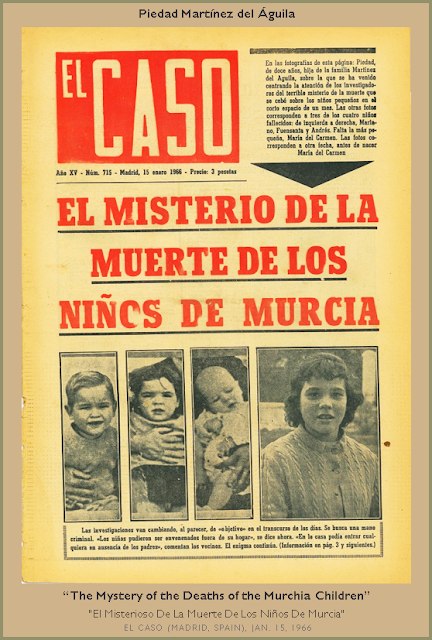 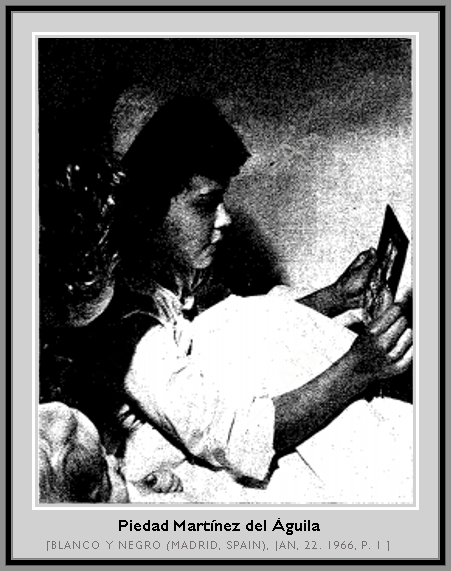 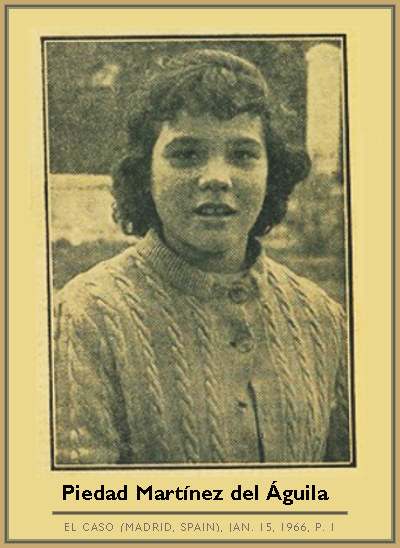 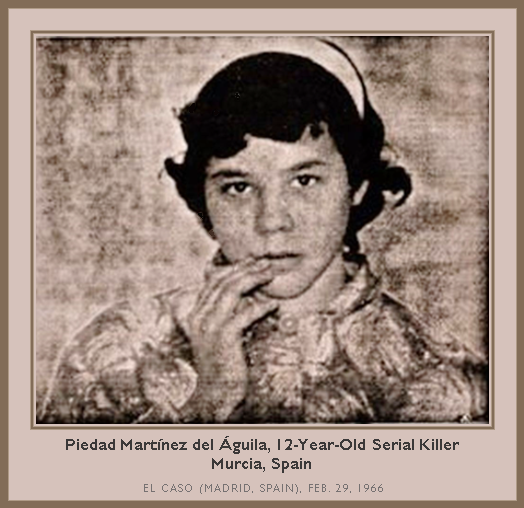 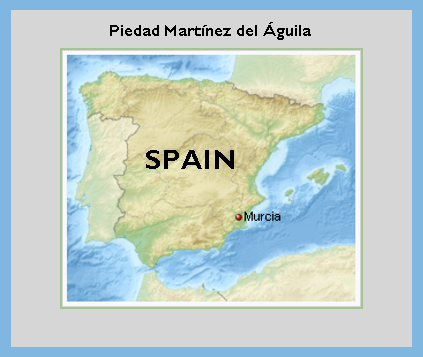