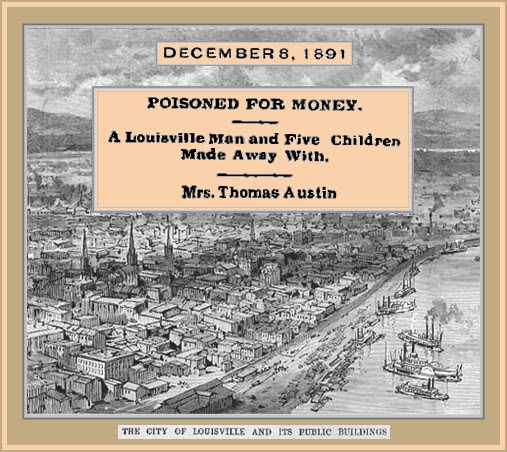 FULL TEXT: The extermination of an entire family, save one member, by poison, in a case that has just been discovered in Louisville, Ky. One year ago Thomas Austin, his wife and five children lived at 1008 Eleventh street. One by one the children died, until one remained. Now the father and remaining child are reported dying. In each case the symptoms have been exactly the same. A slight fever, accompanied by vomiting and severe pains in the stomach, was the first indication. Then the patient grew rapidly worse, and in a day or two death would ensue. In each ease the regular physician gave typhoid fever as the cause of death.

Each child which had died had been insured, and the money was paid by the insurance company immediately after death. The amount of the insurance on each ranged from $200 to $500. The policies were taken out in a weekly payment company. The neighbors began to talk, and finally the attending physician called in a well-known doctor, D. T. Smith. Dr. Smith made a diagnosis and concluded that the cause of the illness of the father was arsenical poisoning.

Dr. Smith said that the case looked very suspicious. He said: “My diagnosis of the symptoms displayed by the child does not favor typhoid fever. It most certainly looks as if arsenic had been administered to the child, and from what I have been able to learn the same symptoms were displayed by all the children.”

The coroner will be asked to have the remains of the Austin children exhumed and an analysis of the stomachs made. Dr. Smith is firmly convinced that arsenic has been used in every case, and his faith in his theory will not be shaken, even if no trace of poison are found in the system of old man Austin and the child. It is possible that only a small dose of arsenic has been given and that it has worked out of the system. The fact that Austin could live so long after poison had been administered may he explained by the fact that the quantity given was not sufficient to cause immediate death.

The mother is alive and well. The insurance policies were are made out in her name. She refuses to talk.