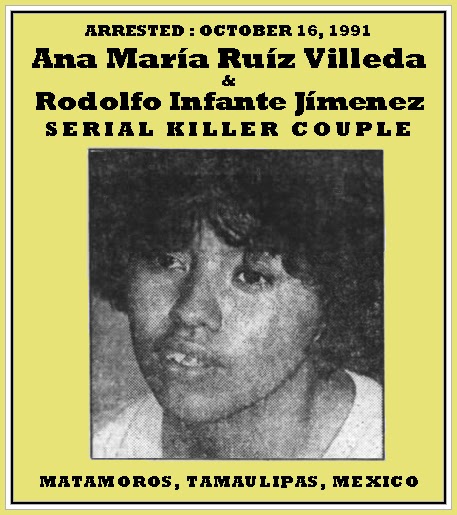 Rodolfo Infante Jímenez (born 1963 in San Benito, Texas, United States) and Ana María Ruíz Villeda (born 1971 in San Luis Potosí, Mexico) beat, robbed, raped and murdered at least eight girls and young women between the ages of 15 to 23 from August through October 1991 in Matamoros area of Tamaulipas state, Mexico. They strangled the victims throwing their bodies into the Rio Grande or in irrigation ditches, and in one case was discarded close to the residence of the killers.

The couple lured their victims, who were mostly from rural areas, from downtown Matamoros with offers of a job at work at El Ebanito, a communal farm 10-20 miles from the city. Two of the girls an offer to assist with learning English and getting a U. S. work visa was offered.

The investigation was prompted when on the morning of October 16, 1991 Alma Lilia Rostro, 17, ran off from the farm after discovering the door had been left unlocked. She ran to matamoros and reported to police that her friend Marina Hernandez Lopez, 14, was missing. Josefina had seen one victim of beatings and repeated rapes, later found dead, and escaped the farm shack where she had been placed and went to the Matamoros police. The girl had been captive on the farm for ten days, always kept locked in a shack when the couple were not there to watch her, before her escape.

The killer couple was arrested on October 16, 1991. The pair confessed to all eight killings, but later they changed their story, each blaming the other. Ana depicted herself as a passive victim of a bullying boyfriend. Yet Alma Lilia described how, before she had the slightest suspecion about the couple, Anna had wrapped a sheet around her neck and started tightening it. At the time the girl wrote off this behavior as merely a peculiar sense of humor.

Each faced to 30-40 years in prison, the maximum allowable sentence in the state of Tamaulipas. At present, no news reports on the actual sentencing have been located.

It must be noted that there are various inconsistencies in the various available sources. The following detailed article with interviews with relatives seems to be the most reliable: Maggie Rivas, “Border nightmare: Couple held in 8 Matamoroas slayings blame each other,” The Arizona Daily Star (Phoenix, Az.), Oct. 20, 1991, p. C-2. 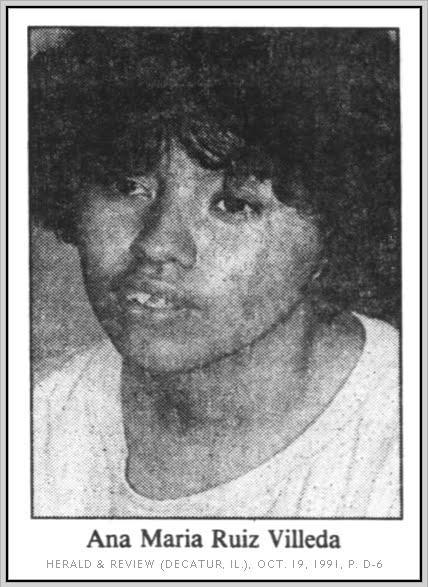 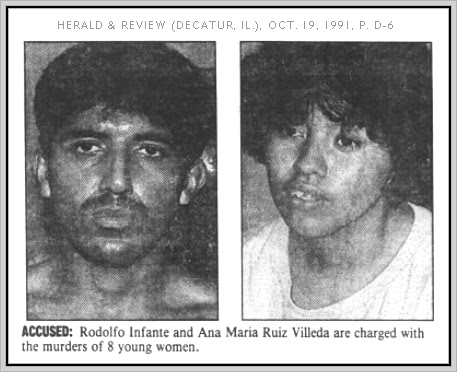