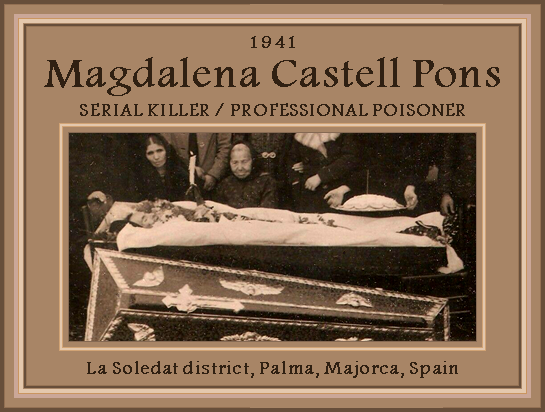 FULL TEXT: Accused of selling poison used for at least four murders, Magdalena Castell, aged 45, was arrested in Palma, Argentina [sic; error; should be Spain]. Twelve of her relatives who are said to have known of her “activities” were also arrested. Mrs. Castell is said to have sold a mixture of rat poison and flour to one woman who used it to kill her mother-in-law, while three others killed their husbands.

EXCERPT: The poisoners of the La Soledad district. In the absence of divorce, try poison. This was what the protagonists of this tragic event thought, as they used poison to do away with the lovers of their husbands, their husbands themselves and even their mothers-in-law, in the early 20th century. These poisoners, who operated from the district of La Soledad, were punished, although it was difficult to prove their guilt and implication in several of the cases of murder by poisoning. The official supplier of the poison was called Magdalena Castell, and although she was condemned, she managed to elude the death sentence. This charlatan healer and fortune teller supplied her customers with a lethal mixture of barium, arsenic and flour.

(Based on article in Spanish): Magdalena Castell Pons lived in the quiet working-class district of La Soledat in Palma, Majorca (Spain). She was a healer, fortune teller, herbalist and clandestine abortionist. Soon, there was a need to expand the business with a brew made with flour, barium and arsenic (the latter products were rat poison that was easily accessible at any store at the time). The main clients were women who wanted to become widows.

Magdalena Castell's intermediary was Antònia Font, who, from her tailor's shop, sent the clientele to the sorceress. One of the first to contact her was Joana Maria Veny Noguera, 40. Her husband had found out he had a lover. To appease her anger, she had tried to kill him by resorting to the services of another healer. Seeing that the product she had been given had no effect, the adulteress thought of the healer of Solitude. This time his "ready" gave the expected results. On December 24, 1939, the unfaithful husband died in the midst of severe vomiting.

Also hostile to her husband was Margalida Martorell Taberner, 32. He was unaware she lived a double life as a prostitute. She decided to kill him with Magdalena Castell's cocktail on January 15, 1940. The same strategy was followed by Antònia Suau Garau, a 28-year-old woman from Puigpunyent. In 1930 he had married an uncle who had come from America. She had incorrectly assumed he was rich, but was disappointed. She took a lover in Palma. She killed him with Castell’s potion on October 19, 1940.

Another customer was Nomia Maria Nicolau Sorell, 28, who had “mother-in-law issues.”  She lived with the woman, 76, and a son. Her husband had disappeared at the outbreak of the Spanish Civil War. It was soon learned that her mother-in-law was planning to marry a 25-year-old boy. In order to prevent that outsider from getting hold of the family inheritance, he decided to kill the old woman. On March 18, 1940, after a week of severe diarrhea, the woman died.

In each case, physicians certified that the deaths were from a heart condition. Yet towards the end of 1940, police became suspicious. The suspicious deaths came to the attention of Eugenio Blanco, head of the Command of the Civil Guard of Palma. He set up an uncover investigation. Then a plan will be orchestrated to stop it. Dressed as a farmer, a police agent contacted the go-between, Antònia Font. He told her that he wanted to kill his wife in a foolproof way. She accompanied him to Magdalena Castell's address, at number 4, Carrer Antoni Rosselló Nadal. He paid her 2,000 pesetas for the lethal cocktail, and when leaving the house, a group of Benemérita's agents stormed the apartment, where they found the two women distributing their money.

Magdalena Castell confessed to her criminal activities and named her homicidal clients. All were arrested. Judgment in the case of the "Poisoners of Solidat" was carried out in April 1943. As author of four crimes for murder, Magdalena Castell was sentenced to death. The penalty, however, was appealed to the Supreme Court, which commuted him to a 30-year prison sentence. Her partner, Antònia Font, fell fourteen years, eight months and one day in minor confinement. To Joana Maria Veny, Margalida Martorell and Antònia Suau, thirty years of minor imprisonment. And to Maria Nicolau, 25 years of major imprisonment.

Interestingly, in its day, the case of the "Poisoners of Solitude" had little media impact. This has been attested by the historian Jeroni F. Fullana Martorell, author of the book, Crímenes y criminales en la isla de (Mallorca 1884-1951), by the publisher Lleonard Muntaner. Fullana kept track of the press at the time and found almost nothing. "In the 1940's," he says, "the censorship was very strong. The newspapers barely covered the judgment. Yes, they did publish the sentence. This has one explanation: Franco's regime considered all matters of public order secret. The regime was probably interested in selling an idyllic image of citizen coexistence. It was only in the 1950's that the media began to give more varied and more informed news. "