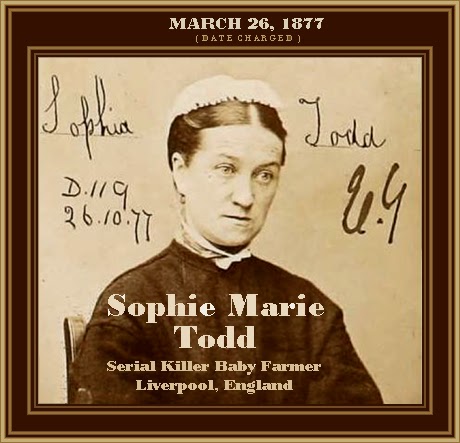 FULL TEXT: A ladylike woman, named Sophia Martha Todd, aged about 35, has been charged before the Liverpool stipendiary magistrate on suspicion having caused the death of a child. About the middle of 1875, the prisoner lodged at the house of a Miss Joliffe, in Prospect Street, Liverpool, and one evening she was seen with an infant, which, she explained, had been left with her by a Dr. and Mrs. George, who had gone to an evening party and intended to call for it on their return. Next day, she was without the child, and she told Miss Joliffe that the parents had taken it away. The prisoner afterwards took lodgings with a Mrs. Oldham, but went away again in a few days, leaving behind her a box, which remained in Mrs. Oldham’s possession. Recently, this box was opened, and at the bottom the body of a child was found tightly wrapped up in clothes and quite mummified. A medical examination showed that the child’s head had been crushed. The police, after much difficulty, traced the prisoner to Old Trafford, near Manchester, where she was apprehended while riding along the road in a trap, accompanied by a Mr. Todd, the agent in advance for a circus, and whom she represented to be her husband. She made a long statement to the detective, to the effect that she adopted the child for a premium of £10, and that it died suddenly in her arms the night it came into her possession. Upon the prisoner was found a letter signed “Beta”, and offering to pay £30 premium for the adoption of a child. With respect to this letter, the police had discovered that a little boy had been sent to the prisoner from Whitehaven; that she took him out with her one day; and that he had never afterwards been seen or heard of. It was also ascertained that five other children were sent to her at different times, and, when questioned about them on her arrest, she said they had all died natural deaths. The prisoner is stated to be the daughter of a civil engineer named Wilson, belonging to the Isle of Wight, and her mother was an East Indian. She was for four years governess in a Polish nobleman’s family in Russia, and afterwards became governess to the children of a nobleman. Some years subsequently, she taught music and languages at Lancaster, and in that town met a farmer, named Jackson, whom she married and brought to Liverpool. They soon separated, and she then went as book-keeper at an hotel, and soon after this she appeared to have commenced the “farming” of children. Her mode of operation was that which we long since exposed, to insert an advertisement in the newspapers in this form :— “Wanted by a respectable married couple, a baby to adopt; a premium expected”; and, upon receiving a reply addressed to the newspaper office, she would disclose her name and address. It was stated that the prisoner was thoroughly accomplished in the fine arts, and could speak five languages. She was remanded for a week. 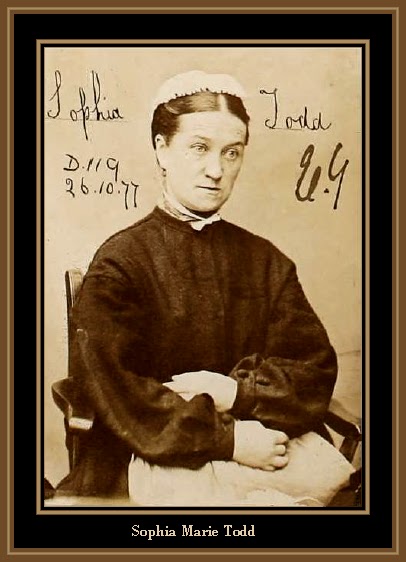 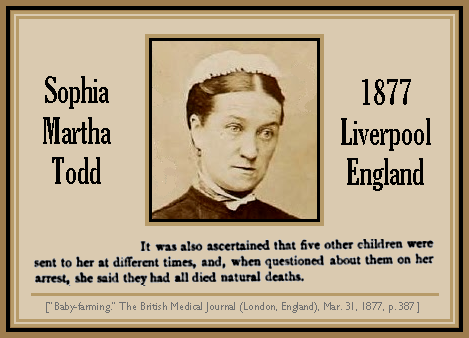