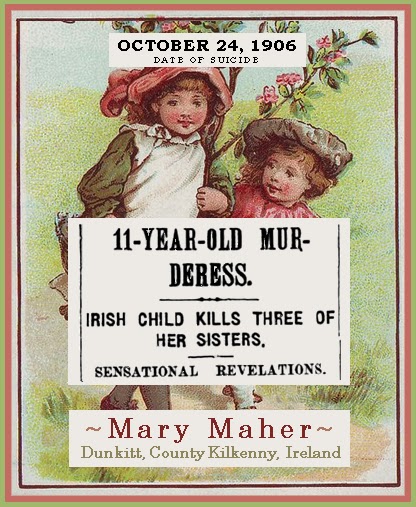 This is one of the most remarkable female serial killer cases of all time and it fits into one of the most remarkable categories of serial killers: young children who have a mania to murder. The case is notable for the killer’s youth, 11 years old, the fact that all her victims were sisters, the fact that she seems to have wanted to work as a nurse girl (possibly in order to kill children outside the family, and most astonishing of all that she committed suicide. Mary Maher’s story is even more sensational than the infamous 11-year old English girl, Mary Bell.

FULL TEXT: A mysterious series of tragedies, which have created considerable sensation in Dunkitt, County Kilkenny, Ireland, would (says the “News of the World”), in the light of a terrible sequel, seem to have been the awful handiwork of a little girl of 11 years. Mary Maher, the girl in question, committed suicide, and in her tragic end the police think, lies the true solution of the fate of her three sisters, Katie, Bridget, and Statia, aged respectively 1, 3, and 4 ½ years, who died in quick succession without any apparent cause.

Before taking her life, Mary Maher had tried to murder her only surviving sister, Maggie, aged 8, by strangulation. In the grim annals of crime no parallel exists to the formidable indictment which is presented by an official list, or diary, of events. Summarised, the shocking story is told in these words:

Mary’s father, Michael Maher, is a railway workman, and lived with his wife, Margaret, and his children, four of whom were girls, in a little cabin at Dunkitt, within three miles of Waterford City, on the Kilkenny side. Mary was the eldest, aged about 11, and, in the absence of her parents, she acted in the capacity of housekeeper, and as “mother” to her brothers and sisters. Nothing untoward disturbed the household until August 20 last. On that day, while Mr. and Mrs. Maher were absent, Katie, the baby, was seized with an unusual fit. Mary was alone with her at the time, and the baby recovered. The next day, the infant, although in good health, died. Mrs. Maher was away from home, and Mary summoned a neighbor.

No suspicion was aroused by the sad episode, and the child was buried. Within six days, a more startling occurrence sent a thrill through the little homestead. Bridget, aged 3, whom her mother, on going to work, had left playing happily about the house, and in her usual health, died without warning. Mary alarmed the neighbors, and, on their visiting the cabin, they saw Bridget’s body reposing peacefully on the bed, her eyes closed, her hands by her sides, and the bed clothes neatly arranged about her body.

There was absolutely nothing to indicate a struggle or a violent death. She bore the serene expression of one asleep. The parents were amazed at their second misfortune. Mary had been the only occupant in the house with Bridget, whose body was interred in the ordinary course. Again, on September 8, the unhappy parents were plunged into mourning by the inexplicable death of Statia, aged 4 ½. Again Mary was alone with Statia when she died; again she called in neighbors when her sister was a corpse. Statia’s body was seen stiff, and partially cold, and set up in a peculiar attitude on the floor. On this occasion the string of tragic deaths was notified to the police, and an inquest was held for the first time.

Margaret Maher, the mother, told the Coroner that Statia was perfectly well in the morning, and witness had no idea as to the cause of death.

Then Mary gave evidence. She said Statia was about the house all the morning she did not go out of the house after her mother left. Statia was sitting on a stool and trying to cry when witness first notjced something was wrong. She was about an hour like that, and then she fell off the stool. She would give one big cry every little while, and would then get a little ease. She was not crying all the time. Witness did not notice anything wrong with her face when she was crying. Witness and Statia did not gather any blackberries or mushrooms or elderberries that day or on the previous day. At half-past 1 Statia was dead. Witness did not give her any milk or anything to drink. They all had breakfast of bread and tea, after which Statia got an extra piece of bread and butter from witness because she was sick. Statia did not take anything to drink with it.

Dr. M. P. Coghlan, medical officer of the Child Dispensary District, declared that there were no external marks that would account for the child’s death. There were, however, signs that

Statia had died convulsed, but nothing sufficiently definite to enable him to say what was the cause of death. If this had been caused by poisoning, the convulsions would have been similar. Statia was a well-nourished child. In the hope that the mystery would be cleared up, a post-mortem examination, was ordered, and an analysis of the internal organs was made. All the organs were sound and healthy; but the stomach was inflamed throughout its entire length, and was almost empty. The viscera was subjected to a most exhaustive chemical analysis by Professor Edwin Lapper, of Dublin, but no trace could be found of any substance of a poisonous nature.

The child’s clothes provided no useful information, and none of the following substances found in the cabin were of a poisonous character, nor was there any indication of them in the viscera: — (1) A bottle of, castor oil; (2) jar of Epsom salts; (3) spirits of turpentine; (4) toothache lotion; (5) paint mixture; (6) tincture of iodine.

The coroner (Mr. Boure) remarked that they were as wise at the end of the inquiry as they were at the commencement, and advised the jury to return an open verdict. This the jury did in these terms: —

“That the deceased, Statia Maher, was found dead, that she had no marks of violence on her body, and no appearance of poison in her stomach, and we cannot say what caused her death.”

So far the veil of mystery cloaked the truth, and the first tangible evidence of Mary being, in all probability, the murderess of her sisters, was provided on October 17. While her parents were away, Mary made a determined effort to kill her only surviving sister, Maggie, aged 8. Maggie has narrated her terrifying experience in the following statement:—

Mary put John out, locked the front door, tied my hands together with bootlaces, and brought me into the bedroom. She then told me to say my prayers. Mary next put gloves on her hands, and told me to make no noise. She knocked me on my back, got on top of me, put one hand on my mouth and another on my neck, and tried to choke me. I could not roar. I next found myself in bed; one of my teeth knocked out, and others loosened the door open and Mary gone. The bootlaces were off my wrists; I was bleeding from my throat.”

Mary once more sought aid from the neighbors, and while they brought Maggie round. Mary went for a stroll. On this information the police decided to arrest Mary.

Sergeant Henry Murphy, of the R.I.C., stationed at Kilmacow, called at the house, but Mary was missing. She had been sent on an errand, and had disappeared. Inquiries showed that Mary had endeavored to engage her services with several persons a few miles from home for the purpose of nursing children! The constant vigilance of the police met with no success until, at 5 o’clock on the morning of October 5, Mary’s body was found floating in a stream close to her home. At the inquest the mother said she could not state whether the appearance of the police might have had an effect on Mary.

Sergeant Murphy told of his fruitless efforts to find Mary. On going down the roadway to wards her father’s house in the early morning he saw a shawl on the bank of the river, also a small bag; a short distance down the stream was Mary’s dead body. There was no evidence of a struggle having taken place, and there were only the single impressions of the child’s boots on the bank leading down to the water.

Dr. Thomas A. Kelleher testified that death was due to drowning.

Then the coroner (Dr. Walsh) reviewed the whole of the facts. ‘Gentlemen,’ he remarked, ‘I understand a number of deaths took place amongst the children in deceased child’s family lately, and the police were extremely suspicious, but they had no evidence until very recently, when she attempted to destroy a young child. The child happened to recover, and made a statement, to the police, and every probability points to the fact that deceased did away with the other children. When a girl of her age commits deliberate murder the most charitable view to take of it is that she was insane — that is, that she was afflicted with homicidal mania. She was also a thief, and was afflicted with kleptomania — that is, an insane desire to steal everything she could lay hands on. She was also a liar, and there is very little doubt but that this girl was a maniac, and that she destroyed these other children. It is probable that she might have caught sight of the police, and that may have induced her to commit suicide. As is generally the case with these people, this girl was not only afflicted with a homicidal mania, but also with a suicidal mania. But what I want to impress upon you is the fact that this girl was probably insane, and it will be a question for you to state in your verdict whether she was insane at the time or not, as, if she was not insane, she was guilty of felo-de-se [suicide]. In olden days any person guilty of felo-de-se had to be buried by the roadside with a stake driven through the body, but that custom is not adhered to nowadays. All the evidence points towards suicide. And I advise you to go by the medical evidence, which is to the effect that the cause of death was drowning, and it will be a question for yourself to say whether deceased was sane or insane.

A juror remarked that he saw the child quite recently while alive, and there was no sign of insanity on her.

Coroner: You cannot always know an insane person from a sane person.

The jury decided: “That Mary Maher committed suicide by drowning on the night of October 24, 1906, at Dunkitt, while insane.” And in a rider stated that they considered great credit was due to Sergeant Murphy for his action in the matter.

The last act in this terrible drama was played at Ullid, where Mary was buried, the rites of Christian burial in the chapel yard at Kilmacow, where her three sisters were interred, being denied to her. 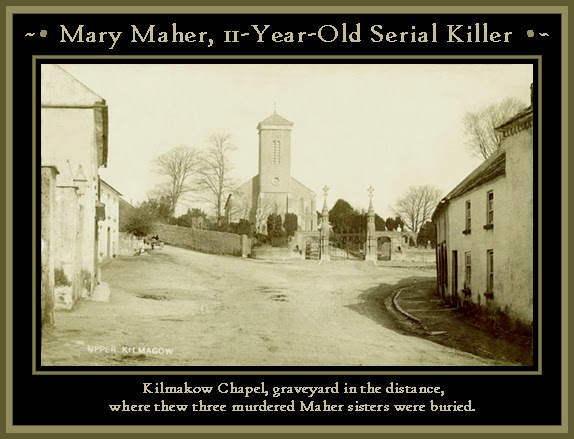 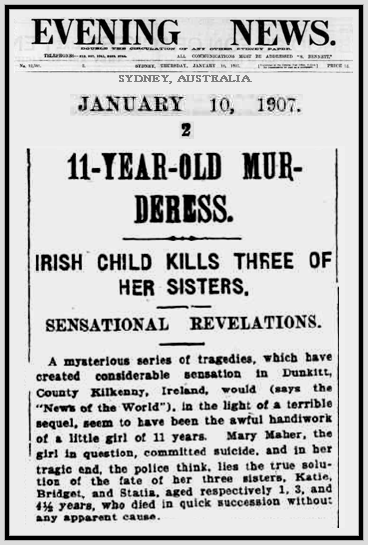 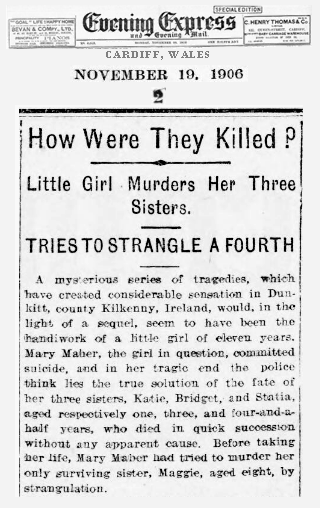 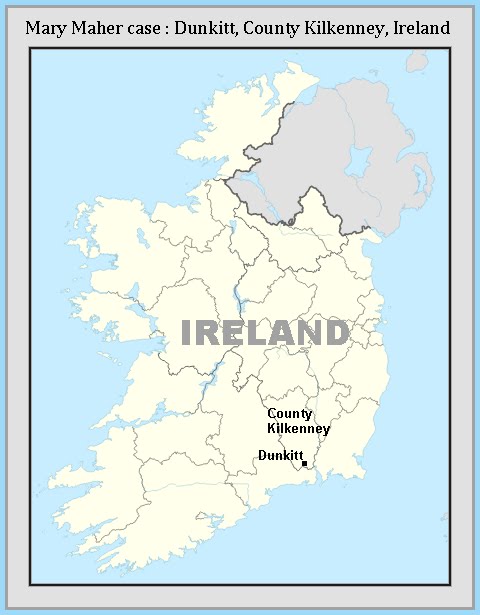