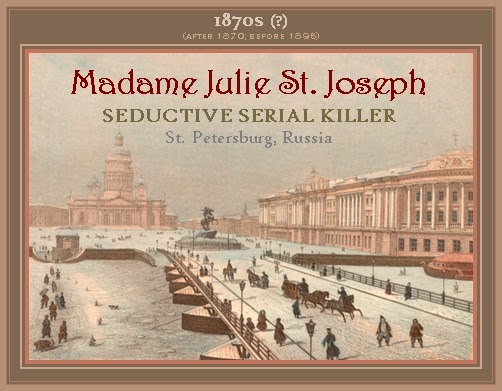 The following text is the final segment of an episode taken from from the memoirs of Michael Danevitch, chief of the Supreme Bureau of the Russian Police (the “secret police”), edited and published in book form in English in1897. It tells the story of a French adventuress, Madame Julie St. Joseph, who had lived in St. Petersburg for some time. She was about 40 years of age during the course of events described here. Two murders and another attempted murder are recounted.

The story opens with descriptions of two mysterious deaths, those of Col. Ignatof and his heir Capt. Peter Baranoff, which investigation reveals to be cases of murder, and closes with the attempted murder of Michael Danevitch under the assumed identity of Count Prebenski.” The total count of Madame St. Joseph’s victims is, we are told, “numerous there was not the slightest doubt.” The poison she and her accomplice employed was black hellebore (holleborus niger).

Note: The name “Julie St. Joseph” appears on page 56 of the cited source.

EXCERPT: Subsequent revelations brought to light that the wretched woman had been in the habit of luring men to their doom by means of her fatal beauty. She bled them of their money, her plan being to cajole them into giving her a lien on any property they might possess. This was most artfully worked by the aid of Vlassovsky, and when the victim had been securely caught, he was poisoned. The poisons were concocted by Madame St. Joseph herself, and when she could not do it herself, Roko administered the fatal dose or doses. She had picked up this man in Spanish America, where she had been for some time, and weaving her spell about him, had made him absolutely her slave.

Vlassovsky, who, up to the time that he made her acquaintance, had been an honest, industrious man, fell under the magic of her influence, as most men did, and became her all-too-willing tool. His nature once corrupted, all scruples were thrown to the winds, and he hastened to try and enrich himself. It seemed that the miserable woman really loved him, and though he was fatally fascinated with her, he was afraid of her; and, as he confessed, his aim was to accumulate money as quickly as possible, and then flee from her and the country for ever. But unfortunately for himself, during that memorable interview following Captain Baranoff’s death, he had aroused the suspicions of Danevitch, whose marvelous perceptive facilities had enabled him to detect something or another in Vlassovsky’s manner, or answers to the questions put to him, which made him suspicious. For Danevitch to become suspicious meant that he would never rest until he had proved his suspicions justified or unfounded.

It need scarcely be said that with her arrest in St. Petersburg Madame St. Joseph’s career came to an end. From the moment that Danevitch entered her house her doom was sealed. Believing him to be the person he represented himself to be, she begged of him to help her financially; and, seeming to yield to her entreaties, he drew up a document which purported to make over to her at his death certain estates in Poland. Of course, these estates had no existence. Having secured him, as she thought, her next step was to poison him by small doses of black hellebore, so that he might gradually sicken and die.

Her devilish cunning was evidenced in every step she took. She would not appear in public with him, nor did she allow any of the visitors to her house to see him. Consequently it would not be generally known that she had associated with him. As his illness developed by means of repeated doses, she would have had him removed to a hotel, and she knew pretty well that, as in Colonel Ignatof’s case, he would shrink from letting it be known that he had been intimate with her. Her cunning, however, overreached itself; she was defeated with her own weapons; Danevitch had been too much for her. The poisoned barley-tea he submitted to analysis, and the evidence against her was overwhelming. But when she found that there was no hope, she was determined to defeat justice, and one morning she was found dead in her cell: she had poisoned herself with prussic acid. The acid was conveyed to her by a warder, who was heavily bribed by one of her friends to do it. It cost him his liberty, however, for he was sent to Northern Siberia for the term of his natural life.

Roko died very soon afterwards from typhoid fever contracted in the prison, but he was faithful to the last, for never a word could be wrung from his lips calculated to incriminate the strange woman who had thrown such a spell around him. Vlassovsky was deported to Northern Siberia in company with the treacherous warder. He very soon succumbed, however, to the awful hardships he was called upon to endure and the rigours of the Arctic climate.

The number of Madame St. Joseph’s victims was never determined. That they were numerous there was not the slightest doubt; and had it not been for the cleverness of Danevitch she would probably have continued to pursue her infamous career for years longer, and ultimately have passed away in the odour of sanctity. Her downfall, it need scarcely be said, caused great satisfaction in St. Petersburg and Moscow, where she had destroyed so many of her victims. 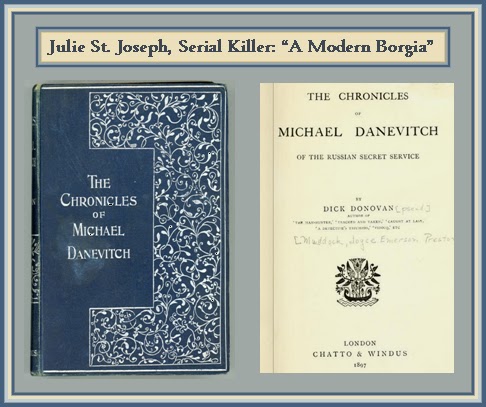