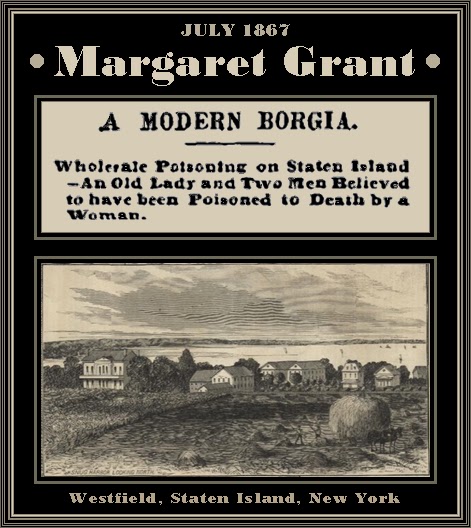 FULL TEXT: A great sensation prevails on Staten Island, caused by the discovery of a dreadful poisoning case at the farm house of J. K. Jessup, in the town of Westfield, near Ellenville station, on the Staten Island Railroad. If the details as given are correct, and we have them from the highest authorities in the county, three persons, one an aged lady, have recently been poisoned to death by a woman named Margaret Grant, J. K. Jessup is a a wealthy farmer residing in the town of Westfield. Among his large force of farm hands recently were two young men named Archibald McClusky and John Dougherty: and among his help about the house and garden were a Mr. Grant and his wife Margaret.Nr. and Mrs. Grant who are both aged about twenty-five years, had been in the service of Mr. Jessup for a long time, for which reason they had frequently received little favors from him that the others did not. This, it seemed, had the effect to create an envious feeling among some of the hands; which resulted in occasional quarrels; and at one time. It is alleged, Mrs. Grant, in a fit of passion, threatened to take their lives, adding that she would “fix them.” This occurred about two months ago. In the latter part of the month of May, McClusky was taken suddenly ill, and despite the best medical aid, died in a short time. The threat of Mrs. Grant had almost been forgotten, and no one thought for a moment that she had been instrumental in causing his death. But a few days ago another incident occurred which aroused everybody’s suspicions. Young Dougherty arose one morning in his usual good health, partook of a hearty breakfast, and started to commence his day’s work at a mill some distance from the house. He had proceeded only a short distance when he became so thirsty that he was compelled to drink from a brook near by. The water did not slake his thirst in the least; and he continued to drink until prostrated by pain, when he was discovered and conveyed back to the house, and there died on the same day; his symptoms throughout being very conclusive, and just before he breathed his last he said he had been killed by Mrs. Grant, who had poisoned his coffee at breakfast; at the same time making a request that his body be opened and examined after his death. To add to this tragic state of affairs, an aged lady in the same house had died suddenly two days previous under similar circumstances. The date of McClusky’s death was May the 19th. The lady, whose name has not been ascertained, died June 15, and Dougherty and on the 17th ult. The facts of the case have not been published before, in order to give the officers of the law a better chance to bring the case into form for prosecution. A Coroner’s inquest was held over the remains of Dougherty, which resulted in the holding of both Mr. and Mrs. Grant to bail, and meantime the body of Dougherty was to be sent to New York for analysis. But when the circumstances attending the death of McClusky and that of the lady were remembered, there remained no doubt that all were depatched by the same hand; and the woman Grant and her husband were re-arrested, and they are now secured in the Richmond county jail, and will not be bailed on any considerations. The chemist who has the body of Dougherty yesterday reported to the authorities that poison had been discovered, and the other bodies will be immediately exhumed and undergo a similar analysis. A further examination of the prisoners will take place to-morrow afternoon, before Justice Vaughn, at Clifton, S. I. The prisoners are what would be called a rough looking pair; and when they were conveyed to the jail in the constable’s carriage, their appearance was so bad as to cause remark by every one who saw them. Margaret is particularly uncouth in appearance, and her features very irregular and repulsive. She is downcast since her last arrest, and begins to manifest deep anxiety. The tragic affair is the main topic of conversation throughout the breadth of the Island.