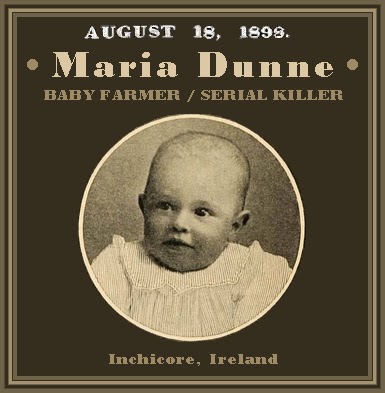 FULL TEXT (Article 1 of 2): In the Southern Division Police Court to-day a woman named Maria Dunne, described as a widow, residing at Inchicore, was charged with causing the death of children under their care, and with having neglected others.

Mr. Clegg, the Crown solicitor, said that the prisoner would show a shocking and barbarous state of things. – Sergeant Thomas Conlon stated that when he visited the house between 3 and 4 p. m. on Monday he found two children lying dead on a couch. There were four other children there, the eldest about four years. He was not so bad as the others. One of the dead children, Leo Mole, was merely skin and bone – there was no flesh. The child O’Grady did not appear to be far gone. The prisoner said to him, “I hope I won’t get into trouble over this. I will give you something for yourself if you say nothing about it. I would not like it to get into the paper. I will give you half-a-sovereign for yourself if you say nothing about it.” The dead children were in the house yet awaiting the inquest. He removed the other children. He saw no food about the house that the children should get. The eldest of the living children in the house appeared healthy, and was not a subject of a charge. He asked the prisoner if she had any other children besides the dead ones in the house. She said she had two. He asked to see them, and she brought up the two children named Wallace and Sutton. The first appeared to be well cared for, and the other was in a bad condition and duty. He asked had she other children. She said “No.” He searched the house, and found near the kitchen another child, Eugene Pyle, one and a half year old. It was tied with a string on a chair near a basket, and was hanging motionless on the right side and apparently dead. He took it up and found it in a filthy condition. It screamed when he tried to straighten out of the position it was in it had the top of a sucking bottle attached to a spool in its mouth. On further search he found in a cradle another infant, George O’Connell, not quite three months old. It was rolled up in filthy rags, in lying on straw in the cradle. Two empty sucking bottles were lying near. He brought these children to the South Dublin Union. The accused alleged to him that she did not know the parents of one of the children. She said that the child O’Connell was driven in a cab to the door when it was about nine days old by a woman, whom she thought would state who its mother was, and who gave her £10 to take the child. The child was rarely three months old now. In the case of all the other children she said that there were weekly and monthly payments were made for them, but that they were nearly all in arrears now. He asked who were the parents. She gave him several addresses. He went to all these places, and there were no such people there at all. He telegraphed to Linden, where she gave another address, and there was no such person there as she named.

A daughter of the accused woman was examined, identified the following letter as being in the handwriting of her mother: -- “Dear James, -- This morning the other found dead. I never went to the doctor with him. Skin and bone the child is. Will you get the cash for him? I will give £1, for I will sell my piano for it. I am gone if you don’t. Don’t let money stop you. Will sell anything. Two children dead.”

The witness further said that her mother had been paid 10s. a month for two months for one of the dead children – O’Grady. The child was there three months. It was eight months there. Her mother fed the children with milk and cornflour. The two children were not ailing before their death, except an odd time. One of them died in a fit. Her mother went for Dr. Louis Byrne, High-street, and her sister for Dr. Attock, Inchicore, but both were out. The mother took the child to Dr. Byrne.

Dr. Boyce deposed that he saw the children about 7:30 the previous evening. Leo Mole was very emaciated in the body, face, and limbs. He appeared to have been dead about ten hours. He attributed death to malnutrition, which might be caused either by improper feeding or want of feeling. The child had not been properly cared for. The other child, Henry O’Grady, was emaciated in the limbs, and the head and body were swollen. He had been dead for some time. He could not say the cause of death. The child was in a neglected state.

FULL TEXT (Article 2 of 2): A shocking ease of baby farming was investigated by a Dublin city magistrate on August 18, when a widow named Maria Dunn was charged with having caused the death of two children, aged 5 and 8 months respectively, by not providing them with.necessary sustenance and with having neglected three other children of 10, 8, and 3 months respectively. The evidence given by the police witnesses showed that the children had been found in the prisoner's house in a fearful condition of emaciation and filth, that the prisoner tried to bribe a police sergeant not to say anything about it, and that the addresses she gave as those of the children’s parents were found to be false. The prisoner was remanded till August 23, the magistrates refusing bail. After the termination of the inquiry it was discovered by the police that in addition to the children found dead in the prisoner's residence one of the other children brought to the South Dublin Union Hospital had died owing to the wretched condition to which it had been reduced. It is very rarely that so shocking a case of baby farming is found in Dublin.