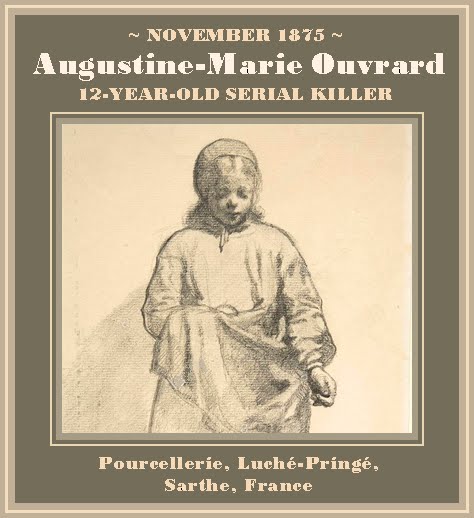 FULL TEXT: A little girl twelve years of age has just been tried in the South of France [error, should be Sarthe dept.], for having smothered two children confided to her care. One of the victims was three years, the other eighteen months old. It was elicited in court that the murderess could not resist committing the crimes with which she was charged. After having smothered the children of her mistress she was removed to the hospital of La Flèche, and there felt impelled by some unnatural force to assassinate the patients. The jury wished to acquit the prisoner, on the ground that she was not responsible for her actions, and but for the direction of the judge she would have been let loose on society to continue her sanguinary career. The judge, however, considered that, whether the prisoner was responsible or not, society should be protected, and a verdict of guilty was found, followed by a sentence of imprisonment. 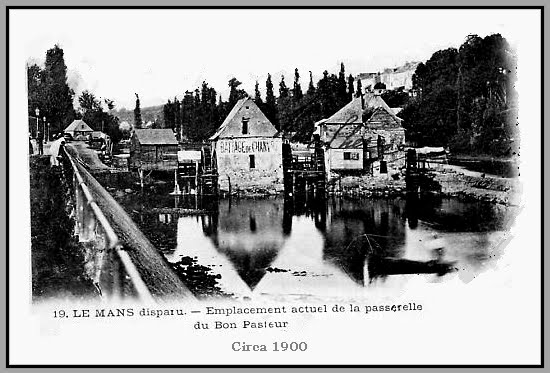 ~ Outcome of the court case:

EXCERPT: The public prosecutor, while admitting moral irresponsibility, however, asked, in the interest of the society as well as that of the accused, that Marie Ouvrard should be found guilty, but as having acted indiscriminately, to allow the Court to order the sequestration of this child in accordance with the conclusions of my report. The defense demanded the acquittal outright, the madness being admitted by the public prosecutor; the child would then be placed at the disposal of the administrative authority. The jury rendered a verdict in accordance with the findings of the Crown. As a result, Marie Ouvrard was sentenced to confinement in the community of Bon Pasteur du Mans until she became of age.

Dr. Moedret question to Augustine Marie - In La Fleche prison there was a woman with you who had a little child; did you want to kill him?

(Refusal to answer) But later she told the guardian sisters (nuns), and then to me, that twice she had gotten the idea of ​​killing this child, and that she probably would have done it if she had not been watched; she knew it was wrong, but could not help it.

At the asylum these impulses were repeated; so she told the sister (December 22) that she would like to hurt the sick, but that she can not because she is being watched and she is afraid of being punished.

Dr. Moedret - Why did you kill Lerat children?
Marie - Because they were always after me; - they bored me, - they always cried, - they were playing in the soup I had to eat, - I did not like them. One was twenty months old, the other four years old; it was me who kept them.
Dr. Moedret - How did you go about it? etc.
Marie - By putting a handkerchief on their mouth (she makes the gesture with her handkerchief); - It did not last long.
Dr. Moedret - Before you kill Henriette, are you sure that you were alone?
Marie - I went into the field to see if the mistress did not come and if I had time.
Dr. Moedret - Since when did you have the idea to kill her?
Marie - For three days.
Dr. Moedret - How did this idea come to you?
Marie - It was seeing a young man kill a partridge: he had taken her by the collar; he took it by the neck.
Dr. Moedret - Why did you put your idea into action after three days of reflection?
Marie - Because I was waiting for the masters to leave.
Dr. Moedret - Did this idea take a long time to develop after you saw a partridge smothered?
Marie - This idea passed into my head very quickly.

FULL TEXT (translated from French): Presidency of Councilor Ghamaillard: Some crimes denoting a degree of perversity so appalling, that one feels almost comforted to be able to put them under the label of madness.

“Today, the science of mental illnesses is based only on the clinical observation of previously sequestrated individuals, maintained in an almost artificial environment, and obliged, in spite of all the unforeseen of a delirious situation, to comply, by force or by force, with the necessary regulations of a closed hospital.

French genius, public beneficence, and medical devotion have, in the face of the great majority of pathological cases of the mind, succeeded in leading scientific truth to the limits so remote and so precise that it reaches in this moment. But all delusions are not cloistered.

Many insane persons, indeed, very curious to study, having of themselves a very thorough knowledge and being all the more unhappy, wander on an adventure and move with some anxiety on the fragile soil of the limited reason.”

These lines serve as a preamble to a remarkable work which has just been published by Dr. Legrand du Saulle, the eminent alienist, to whom the courts have so often resorted.

They seem to apply, with a sad opportunity to the monstrous case that concerns us here.

The author, within his learned opus, enumerates some observations, fruits of a patiently acquired experience. He quotes, among other things, a distinguished, intelligent, active, punctual, conscientious girl with a perfect reputation who, when she crosses the street alone, constantly expects someone to fall from a window. at his feet. and dreads being accused of murder.

He cites again a merchant bringing to business an incontestable aptitude, but always pursued by the preoccupation with counting objects out of sight: the flowers of a paper, the volumes of a library, the furniture of a piece, the buttons of a coat. . . It was a surprise:

-- “Excuse me, said this monomaniac, it is stronger than my will it is absolutely necessary that I count!”

Marie Ouvrard, too, obeys an involuntary impulse, but an impulse it is horrible that she must kill this child of thirteen, pale, puny, emaciated, has committed two murders under circumstances that the procedure states as follows:

The Lerat spouses are farmers and live in the commune of Luché-Pringé (Sarthe). They had two little girls, Joephine-Henriette and Marie, the first of twenty months, the second of three and a half years. These children were frequently entrusted to the care of Augustine Marie Ouvrard, entered the service of the Lerat spouses, in June 1874.

In the day of the 23rd of August, 1875, while the servant was at Luché-Pringé to make commissions, the woman Lerat lay her two daughters in their beds and went to the fields. About three quarters of an hour later, this woman heard the young Ouvrard begging her to come home. She returned. On arriving she found little Josephine-Henriette in her bed, the child was lying on his side and had her mouth open, her tongue was out between his teeth although it was still hot, she had ceased to live.

Marie Ouvrard, questioned, said that she had noticed that Josephine-Henriette was “turning” in her bed in a way that had worried her, so she had warned her mistress. A doctor was called, he claimed to discover the causes of death.

On the following 19th of September, about mid-day, the tired Lerat woman lay down after having recommended to her servant to watch over her daughter.

Between three and four o’clock she was awakened by Marie Ouvrard, who shouted to her: “Mistress, come in quickly, Marie has fallen into the stable and she will not waken.” The mother ran to her child, she was lying face down on the floor, like her sister, her mouth was open and her tongue was out. She bore no trace of violence. She was not cold yet, but she no longer existed.

Marie Ouvrard recounted that having left this child for a few moments, on her return she had found her lying on her stomach and making no movement.

The autopsy was performed on the corpse; it was recognized that Marie Lerat had succumbed to asphyxiation. It was therefore clear that this death was the result of a crime. An instruction was followed and soon gave rise to serious suspicions about the young Ouvrard; the circumstances in which the attack was committed, the contradictory statements of the accused, her attitude determined the magistrates to put her under arrest.

A few days later, she confessed that she had killed the two children of the Lerat couple by compressing their mouth and nose with a handkerchief. She had resolved to kill the two victims because they “bored her, they were spoiling the soup and were causing work that she wanted to avoid. “

The most important testimonies collected at the hearing are those provided by the men of the medical arts.

One of them, Dr. Degaille. In the early days [in the La Fleche asylum], Marie Ouvrard had worked diligently, and no symptoms of lunacy appeared in her home. But one morning, a woman was incarcerated; she had a two-year-old with her. From that moment, the young inmate became gloomy. She confessed that she was obsessed with the idea of ​​making this child a new victim.

Finally, a curious confession, as the president asked her who had inspired him the idea of ​​killing two little beings by suffocation.

It is, she replied, a mountebank who made turns which I heard pleasantly, speaking of a child who shouted: “So put a handkerchief on his mouth!”

(1) The madness of doubt (with delirium of touch), by the doctor Legrand du Saulle, a pamphlet in-8 °. Adrien Delahaye and C °, editors. 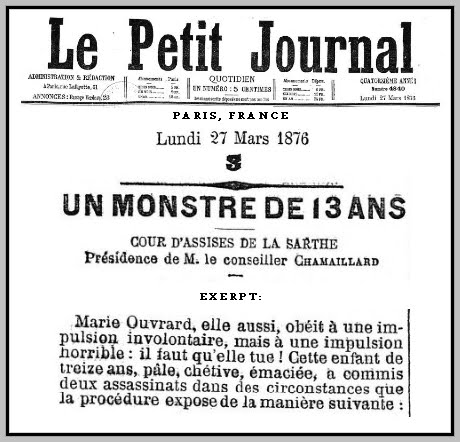 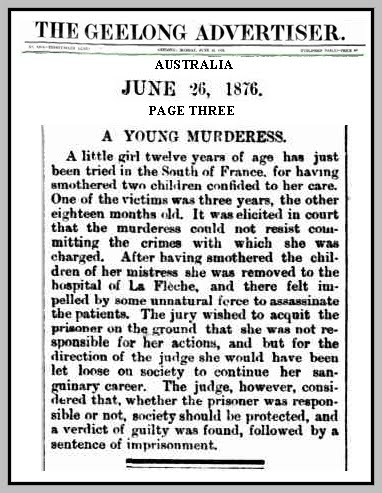 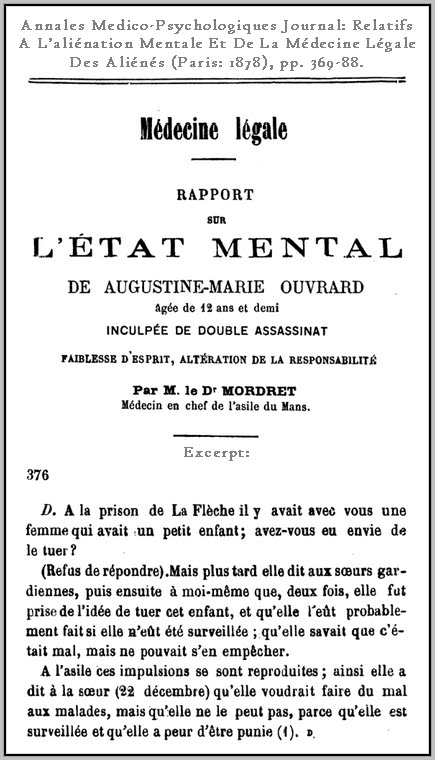 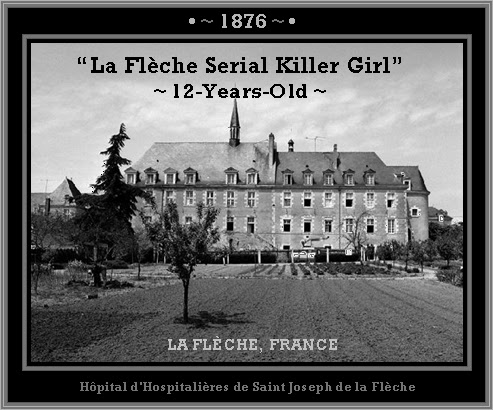