“Frenzied Wails of Murderesses in the Shadow of the Guillotine”: Chivalry Justice in 1929 France 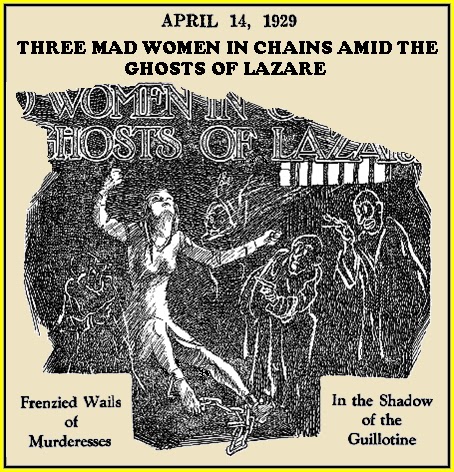 FULL TEXT: In the historic prison of St. Lazare here I have seen a spectacle more in keeping with the middle ages than with modern ideas of the treatment of prisoners — even when they are under the death sentence for brutal crimes.

Three women under sentence of death by guillotining have lost their reason under the ordeal, and had to be chained to their beds by rust-coated chains and padlocks dug out from the cellars from which they had not been taken even in revolutionary days, because they were deemed too barbarous.

THERE are four women under death sentence in the Paris area at the present time. And that is a record for which one must go back to revolutionary days.

The three in St. Lazare were admittedly guilty of horrible crimes. One, an elderly Madame David, murdered an infant of eight months, to spite its mother, by stuffing a sponge into its throat, and then stood by shedding crocodile tears over the child's sufferings when, if she had told the truth, the doctor could have saved its life.

The youngest and prettiest of the three is a Serbian girl who is known as the ‘Murderess with, the Evil Eye,’ because it is alleged that she hypnotised her victim, a girl of twelve, before strangling her in the Bois due Boulogne. The third is a middle-aged woman named Vabre, who killed her stepson be cause his father declared he was going to leave the woman owing to her ill treatment of the children.

The two first named successfully protested against being asked to occupy in turn cell No. 13, which, in addition to being deemed unlucky, has sheltered some of the most tragic figures of revolutionary days, including the poet, Andre Chenier, whose ghost is said by the superstitious still to haunt the cell and the adjoining corridors, especially when the occupant is fated to die by the guillotine.

After the protest, the two women were allowed to occupy together cell No. 12; but when Madame Vabre arrived, she was forced to take the cell of ill-omen because there was no other.

One night the attendants and occupants of neighboring cells were aroused by terrible shrieks, and Blanche Vabre jumped from her bed under the delusion that the spirit of her victim and the previous occupants of this ghastly cell, were walking in procession to torment her. She broke into a frenzy, tearing the clothes from, her body, and trying to dash her brains out against the wall with the mad idea of ending the torture she was suffering from her delusions.

Finally, five men and six women attendants overcame her, but, to the shame of the French authorities, it has, to be said that the only means they had available for dealing with this demented creature was the mediaeval system of heavy chains attached to the body, so that the unhappy creature cannot rest night or day.

Two nights later new cries were heard, and this time it was the mind of Madame David that had given way under the influence of the distressing scenes next door.

Her delusion was that the executioner, ‘Monsieur Paris,’ as he is grimly known, had entered her cell in the night to take her to death, and she sprung from bed to hurl missiles at him, shrieking meanwhile for assistance against him. Next, she tore her clothing to strips, and then attacked with fury her fellow prisoner.

The two women fought wildly, scratching each other until their faces were little more than bleeding pulp, and when assistance, arrived, both had to be chained like the woman next door.

The President has now announced that the death sentence will not be carried out in the case of the woman Vabre or Mdlle Kures, the young Serbian, but so far he has refused to interfere with the sentence on the woman David.

The cases have excited considerable controversy in Paris, where no woman has been executed for twenty years, no matter how atrocious the crimes imputed them; but a variety of circumstances have moved public opinion against mercy to women murderers.

One is the growing agitation for sex equality in politics, it being urged that if women are to be the equality of men in one realm, they ought to be equal in all, before the guillotine, and most of the ardent Feminists are logical enough to accept this grim reasoning, and refuse to identify themselves with a demand for respite, or, where they do so, they are careful to make clear that it is because they are opposed to capital punishment on principle.

The other reason weighing with public opinion is that there has been a great increased in crimes of violence by women, and it is accompanied by a craze for carrying firearms that are used at the slightest provocation by wives and sweethearts.

This strange fashion has grown to such an extent that up to date hand bags have what is known as the ‘pistol pocket’ in which the fashionable dame secrets the automatic ready to be produced at need.

[“Three Mad Women In Chains Amid The Ghosts Of Lazare – Frenzied Wails of  Murderesses in the Shadow of the Guillotine,” Sunday Times (Sydney, NSW, Australia), Apr. 14, 1929, p. 22]