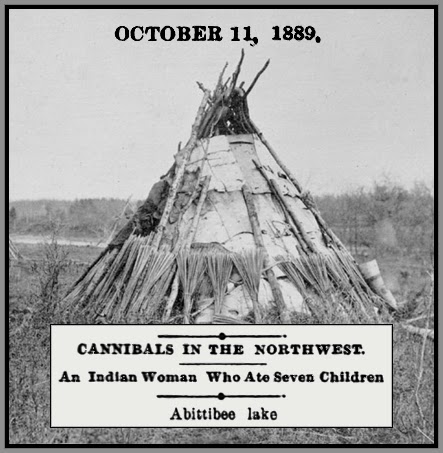 FULL TEXT: Ottawa, Ont., October 10 – A gentleman just returned from an exploring expedition in the wilds of northwestern Ontario said that he had discovered during his travels a tribe of Indians who have practiced cannibalism up to within a few years ago when the country was first visited by French missionaries.

In the vicinity of Abittibee lake he was shown an Indian child whose grandmother had killed and eaten seven of her young children, the child’s father being the only one to escape. He made his mother’s [sic] terrible deed known to the chief of the tribe, who sent his men to arrest her. On entering the wigwam they found the head of the last child boiling in a pot over the fire. She was ordered to be shot, lots having been drawn to see who the executioneer [sic] should be. The unlucky straw fell to an old Indian, who successfully removed the unnatural mother from doing further harm.

On the Quinze lake several years ago he found that full blooded warrior had killed and eaten four of his sons, but was awkward shot and killed by his fifth son.

NOTE: It would be reasonable to say that this case, since it involves a woman who was apparently brought up in a culture that practiced cannibalism, should no be properly classed as a “serial killer” case. Nevertheless, such borderline category cases as this one ought to be looked at when studying the who spectrum of serial killer case varieties, thus it is included here. 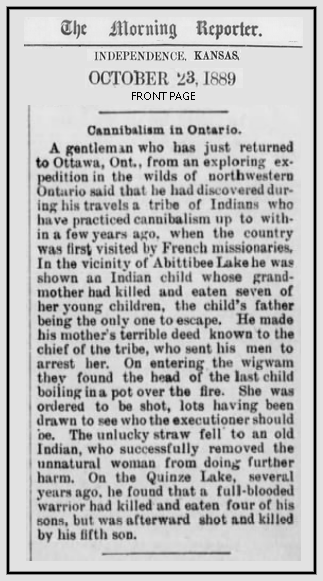