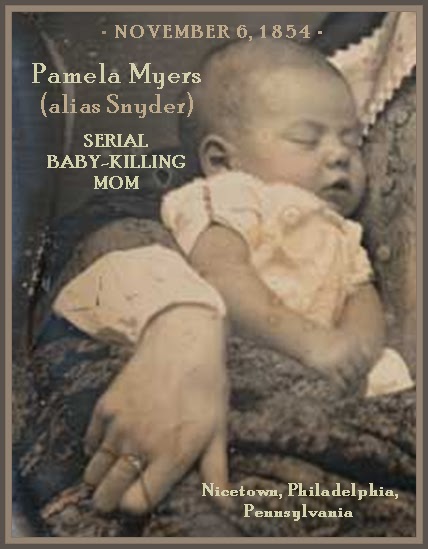 FULL TEXT (Article 1 of 2): Pamela Myers, alias Snyder, is the name of the woman who is charged with the murder of her children. Our telegraph reports yesterday contained some particulars of the case, the following are additional circumstances: She confessed to the Mayor (of Philadelphia) to having in succession killed five of her children as soon as born, two by one father, and three by another. The last child was born five days since, and was made away with, like the others, by being thrown into the sink. The first information of this horrible disclosure was made to the Mayor by an anonymous letter. The affair happened at Nicetown, in the upper part of Philadelphia. – this hearing of the case was to have taken place yesterday forenoon, but was deferred owing to the illness of of the unfortunate woman. The children were of course all illegitimate. 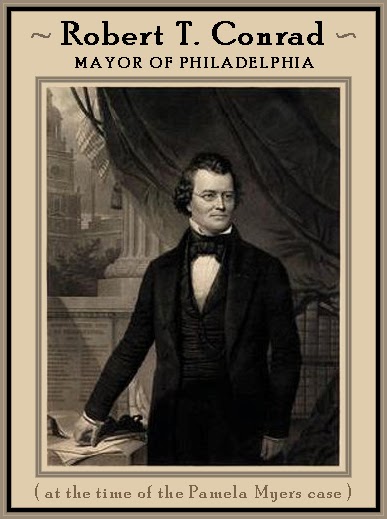 FULL TEXT (Article 2 of 2): On Thursday two of the special officers of the police paid a visit to the house occupied by Mr. Rice, at Nicetown, for the purpose of endeavoring to find the body of one of the children of Pamela Snyder, which she stated had been buried there. They effected their object, and an inquest was held upon the remains yesterday at the Union street station house, by Coroner Delavan, in the presence of Alderman Lenney.

The first witness called was Dr. Andrew J. Smiley, who testified to having examined the remains of a child found among a quantity of decomposed matter, contained in a rough wooden box, about three feet long and one foot wide. He detailed in technical terms the various portions  of the skeletons found, including the bones of the head, spinal column, arms and lower extremities. He considered from the size of the bones that the child had arrived at its full time; but from the advanced stage of decomposition, it was impossible to say that the child had been born alive, or to decide upon its sex. There was no mark upon the skull to indicate any violence.

Officer Clark detailed the steps taken in the case from the arrest of the girl up to Thursday, when he went in company with officer Seed to Nicetown. Some information received from Charlotte Snyder, an aunt of Pamela, they dug in a spot she pointed out to them, and in a few minutes came to a rough wooden box, about three feet beneath the surface. This is the child that Wm. Snyder told me that he and George Altemus had buried, and he at the same time acknowledged himself to be the father of it. – Pamela Myers at the time lived with her grandmother, in the house to which the yard where the body was found was attached. It was now occupied by Mr. Rice. The child was born on Sunday evening, February 22nd, 1852, and was the next day washed and laid out by Elizabeth McGuire.

Officer Seed corroborated the evidence of Mr. Clark, stating in addition, that Pamela had told him of having had five children, two of which choked to death. One of these she said she had thrown into the cess-pool of the yellow house opposite the house in which she was arrested, and that it was afterwards taken out by her uncle and other people, who buried it in the garden. I think the body found is that of the third child she acknowledges having; two she said had not come to their full time, and she left them in the field.

Hannah Snyder, an aunt of the accused, testified that she could not tell the exact time when it was born, except that it happened on a Sunday. Pamela had been down to her mother’s, and after coming home, appeared to be in labor. She went up stairs, and from what she saw, accused Pamela of having given birth to a child, but she denied it.

After hunting for it, we discovered it in the cesspool attached to the house. The attempt to get it out failed, but after night Wm. Snyder put a ladder down, and in that way it got out. The body was placed in a wooden box that I used to bring coal in. the next night it was buried. This was about three years since, and I believe she has had two children since that. I saw the child; it was a girl. I saw a dent upon the head, and supposed it was caused from striking something in falling into the well. I understood she was taken sick once before when riding into the city with her brother. – While he was serving some customers with milk, she went up an alley, and on getting into the wagon again her brother drove out home with her. Her last child was born four weeks ago last Thursday. I know this only by hearsay, but I know that she was previously in the family way.

Geore Altemus testified that on the 22d of February, 1852, he mistrusted there was something wrong, from seeing blood in the yard, and two women looking about as if something had been lost. He inquired the object of their search and was informed they supposed a child had been thrown in the well. Witness got a rake, and raised what he supposed to be the child’s foot. Afterwards, a ladder was brought, and in the presence of Wm. Snyder and David Kern, the child was taken from the well. The child was taken from witness by Snyder. The next day the witness and Snyder buried the child in the garden. The box in which it was buried was recognized by witness. The father was said to be George Care. Pamela is reported to have given birth to two children since 1852.

Thomas Rice testified that while digging a well on the farm on which he now lives, he struck on a box which Wm. Snyder had told him he had put there. Mr. Rice said he had heard of a child being born, and that it had been buried there, but did not suppose any foul means had been used to destroy its life. He said it was a common occurrence for poor people in the country to bury children in the gardens or lots, to save the expense of  putting them in the grave-yards. An additional reason why he supposed no crime had been committed, was the circumstances of an Alderman having investigated a case of supposed infanticide, and found nothing in it. In answer to a question by a Juror, whether he ever supposed the girl to be in a delicate situation, while in his employ, the witness answered that he never noticed a girl in his house; he passed them as he would a dog.

David J. Mott testified that he assisted in digging up a box containing the remains of the child, after the spot had been pointed out by Mrs. Snyder.

The testimony  then closed, and the jury, soon after, rendered the following verdict: --

“That box contains the remains of the body of a female child, born on the 22nd of Feb., 1852, and who was killed by its mother, Pamela Myers, on the day of its birth.” 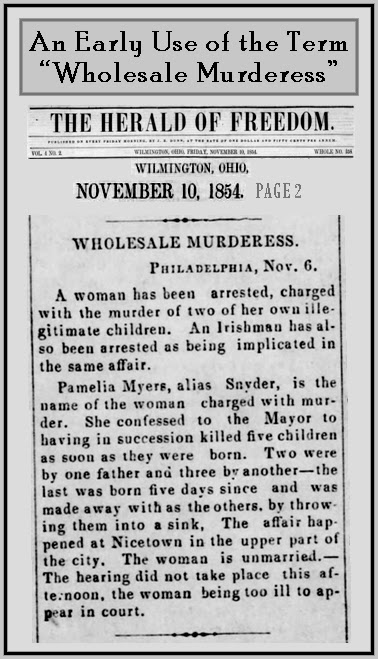