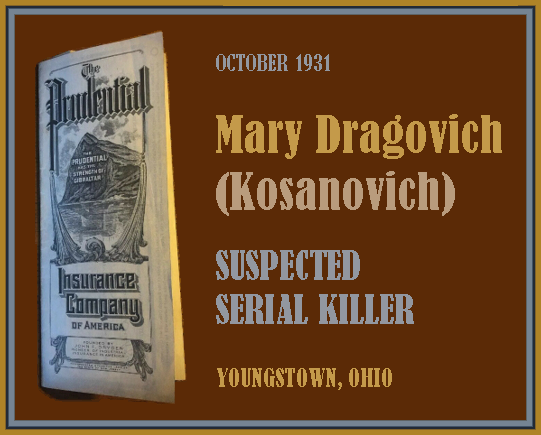 FULL TEXT: Youngstown, Ohio. – Police Tuesday were informed by the county prosecutor’s office they have sufficient evidence to bring murder charges against a woman accused of six killings, but decided upon a further investigation before issuing any warrant.

Detective Lieut. Louis Colabine, in charge of the investigation, said he would not act until he has checked death certificates and conferred with Coroner M. E. Hayes and a physician.

The woman, operator of a boarding house, was blamed by a neighbor and her son-in-law for the deaths of two children, two husbands and two boarders. She held insurance policies on the lives of three of the men.

Her first husband died of a leg infection six years ago, police said two years ago in the Massillon State Hospital for the Insane. The second husband, a boarder said, “fell over in a fit” after drinking a cup of tea brewed by his wife.

The boarder said another boarder died on the way to work and he overheard the woman say she soon would “have another boarder in the hole.” He said he became frightened when he learned she had a $500 policy on his own life and left her home.

The woman denied she had anything to do with the deaths of the four men.

FULL TEXT: Youngstown, Jan. 14. – Reports that a doctor has refused to sign a death certificate for a boarder who died in her home were added today to the tangled investigation of a woman accused of killing four men and two children.

Police got the story of the deaths from a neighbor. Coroner M. E. Hayes, who signed death certificates for two of the men, expressed belief the story was prompted by a neighborhood quarrel. Officers, nevertheless, were assured by Assistant Professor James Cooper that they had evidence enough to warrant murder charges.

Investigation began after the police informant said his wife had dug bits of flesh, bones, and clothing from her garden. Records showed one of the woman’s husbands died in an insane asylum to which he had taken as an emergency case. He went into convulsions after drinking a cup of tea, a witness said. The other husband died of a leg infection. The boarders, according to the coroner, died of heart disease. Three of the men left the woman $1,000 life insurance policies.

The doctor said he was called to attend a boarder at the house, and found him in severe cramps. The patient died a few days later. The physician said Coroner M. E. Hayes asked him to sign the death certificate, but he refused, “due to strange circumstances.” Hayes himself finally signed the certificate, giving heart disease as the cause of death.

FULL TEXT: Youngstown, O., Oct. 10. – Love affairs of Mrs. Mary Kosanovich for the last nine years were being investigated by police today in the hope of getting some clue to the murder of Nick Dunovic, 35, found slain Thursday near Campbell.

Mrs. Kosanovich, 32, was mistress of the boarding house where Dunovic lived.

In her house, police found 23 insurance policies, 15 of which were taken out on men classified by the police as either former boarders, husbands or friends of the woman. Five of the policies were on Mrs. Kovanovich herself and three were carried on her 18-year-old daughter.

A suicide note found in Mrs. Kosanovich’s pocketbook, which she says was written by Dunovic, added to a belief of police that she was engaged in an insurance “racket.”

Arrested when she identified the body, she has since maintained ignorance of how Dunovic was slain. He had been stabbed in the chest and his skull fractured by a blow.

Four men, two of whom are boarders of Mrs. Kosanovich, and two who attended a party in her home Wednesday night, when Dunovic was last seen alive, were being held with the woman as suspects.

Beyond the possibility that Dunovic might have been slain for his insurance, police admitted today that they are still without evidence definitely linking any of the suspects with the crime. Most of the policies found were made out beneficiary.

FRONT PAGE: Youngstown, O., Oct. 10. – Altho admitting they were baffled, temporarily at least, In their attempt to solve the slaying of Nicholas Dunovic, 40, a suspected victim of a wholesale Insurance collection murder plot, authorities here tonight delved into the past life of Mrs. Mary Dragovich, om of the five held in Dunovic's death.

Mrs. Dragovich, also known as I Mary Kosanovich, was the landlady st the rooming house where Dunovic lived. Bloodstains found in I Dunovic's room lfd police to believe the steel worker was killed while he slept Wednesday night and his body i taken to the lonely spot in Campbell where it was found.

Discovery of 23 insurance policies, totaling about $12,000, in Mrs. Dragovich's home and a purported "suicide note," written In Croatian and signed "Nicholas Dunovic" were the outstanding developments which further complicated the case today. The note was found in Mrs. Dragovich's pocketbook. Police believed it was fictitious.

Seventeen of the insurance policies were carried by men police said were roomers at the Dragovlch home. The others were carried on the woman herself and her daughter, Dorothy, 17.

The policies were located after police learned the woman collected on policies of insurance held by a former husband and a former boarder at her home, both of whom died under mysterious circumstances. Neither death has been solved.

Puzzled over the authorship of a purported "suicide note," police investigating the murder of Nicholas

Dunovic, 40, a suspected victim of a wholesale insurance collection racket, today discovered 23 insurance policies in the home of Mrs. Mary Dragovleh, 32, who is being held, pending the result of the  probe.

The woman was named beneficiary in each of the 23 policies found in the house, where Dunovic resided as a boarder, police aid. The policies, taken out by a former husband of the woman and her friends, and roomers, totaled about: $12,000.

Discovery of the policies followed. the admissions of Mrs. Dragovich that she had applied for the money due on a $1,200 policy-held by Dunovic, in which she was beneficiary, and that she had collected the insurance money for another boarder and a former husband.

Convinced of his innocence, police released one of the five men suspects but continued to hold the other four and Mrs. Dragovich, and questioned them today concerning a note which was uncovered during the investigation of, the Dunovic murder.

Written in Croatian, the note, signed by Dunovic, declared that he had quit his job and that he was going to kill himself. In the note, the writer requested that all of his belongings be given to "my wife."

While authorities were inclined to question the credibility of the note the suspects declared that It was written by Dunovic before he died. The woman admitted, according to police, that she was Dunovic's common-law wife and that he refered to her in his note.

Investigation Into the possible one widespread insurance racket, began after the body of Dunovic, stabbed and battered, was found on a lonely road near Campbell, O. Police, however, after finding bloodstains in his j room, stated they believed he was slain in the boarding house.

Detectives questioned two boarding at the Kosanovich home, held as suspects without results. Four Mrs. Kosanovich had obtained insurance were being sought for questioning.

Questioned repeatedly through an interpreter as to why she carried so many insurance policies on her boarders, Mrs. Kosanovich answered defiantly, "None of your business."