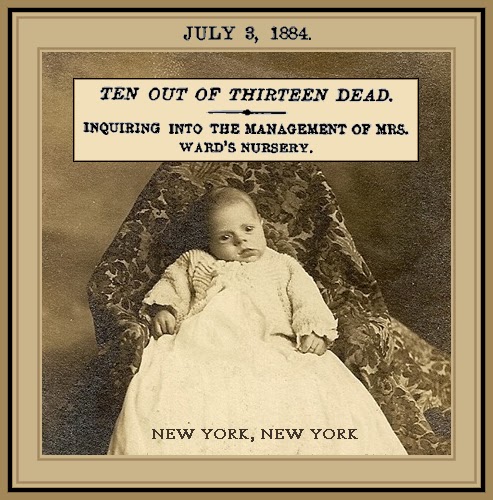 FULL TEXT: New York, N. Y. – The bodies of two little babies lay on the table in the parlor of Mrs. Mary Josephine Ward’s “St. Vincent de Paul Nursery and School for Children,” at No. 692 East One Hundred and Sixty-fourth-street, yesterday afternoon. In the play-room outside three chubby babes rolled about on the floor and laughed and crowed merrily as though there was no token of death in the house. They are all that remain of 13 little ones who have been boarded at the establishment, which is known as a “baby farm,” since Jan. 6 last. The other 10 have all died, three of them within the last 36 hours.

The little forms in the parlor were those of Mabel Louisa Baker, a colored child of 6 months who died at 1 o’clock yesterday morning of what Mrs. Ward thought was convulsions, in connection with meningitis, and Mary Ellen McCartney a white baby of 2 months, who died at 2 o’clock yesterday afternoon of what Mrs. Ward pronounced exhaustion, due to an attack of cholera infantum. No physician was called to attend either of the children, as Mrs. Ward says that she thought she could treat them herself, although they have been ill and constantly falling since Saturday last. On Monday night Josephine Cress, a 3 months’ old baby, had died without medical attendance. Coroner Merkle and Deputy Coroner Messemer viewed the bodies of the two babies yesterday, and an autopsy will be held at the Morgue this afternoon.

Dr. Messemer said to a TIMES reporter last evening: “Mrs. Ward’s house, so far as I can discover, and I nave made a searching investigation, is not a ‘baby farm’ in the bad sense of that term. I never saw an institution of the kind more cleanly, and the living children are as healthy as such children can be expected to be. The only trouble with the woman seems to be that she has neglected to call in physicians when the babies were sick, and they have died on her hands. This was the cane with these last three only. Dr. H. H. Dodin certified to the deaths of five, and Dr. J. Milton Williams to those of two of the other seven who have died.”

A TIMES reporter inspected the nursery kept by Mrs. Ward yesterday, from attic to cellar, as did also an officer of the Society for the Prevention of Cruelty to Children, and found the place to be just as Dr. Messemer stated. Mrs. Ward is a colored woman, and the neighbors speak highly of her, and say that she takes remarkably good care of the children in her charge. The nursery is an incorporated institution, the incorporators being Drs. John E. Comfort, Hiram Turner, William J. McMahon, Joseph E. Miller, and H. H. Dodin, and Joseph J. and Mary J. Ward. Joseph J. Ward filed about eight months ago, and since then his widow has carried on the institution alone. She receives $10 a month for the board of the children. Superintendent Jenkins, of the Society for the Prevention of Cruelty to Children, says that he has had the place investigated before, and he found nothing that could be complained of. The investigation yesterday resulted in the same way, and he believes that Mrs. Ward treated the babies well, and is to be blamed only for neglecting to call physicians to attend to the sick ones.

“We have been censured,” said Mr. Jenkins, “for not seeing that this nursery was licensed. As it is an incorporated institution it is not required by the law to be licensed. We keep a keen lookout for baby-farming establishments, and this is nothing of the kind. We have kept it in view from the beginning.”

Coroner Merkle will make an effort to find the mothers of the dead children before holding an inquest.