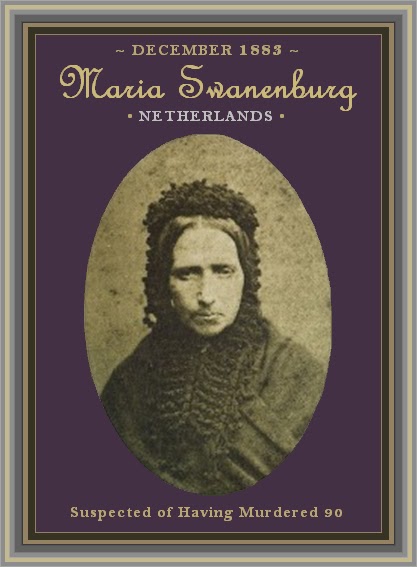 Maria Catherina Swanenburg (in some sources her name is given as “Van der Linden" or "van de Linden")  (1839 - 1915) was a Dutch serial murderer. She was affectionately given the nickname of “Goeie Mie” (Dutch for “Good Me”), which she got for taking care of children and ill people in the poor neighborhood of Leiden in which she lived. After “Goeie Mie” was caught poisoning a family by the name of Groothuizen the murderess was arrested December 15, 1883. The investigation of her crimes looked into more than 90 suspicious deaths and lasted more than eighteen years. Maria’s first victims were her own parents whom she murdered in 1883. The majority of her poisoning victims survived. Twenty-seven died; forty-five survived. But many of them were crippled for life. For decades Goeie Mie’s poisoning victims could be seen navigating about Leiden on crutches.

Her motivation is usually given as money. Swanenburg, like scores of other female serial killers caught in nations across the globe, insured her victims before murdering them with poison. Yet Swanenburg never spent the blood money she gained from the deaths. She was caught when trying to poison the family in December 1883.

On April 25, 1885. A remorseless Maria Swanenburg was found guilty and sentenced by the judge to prison, where she died in 1915. 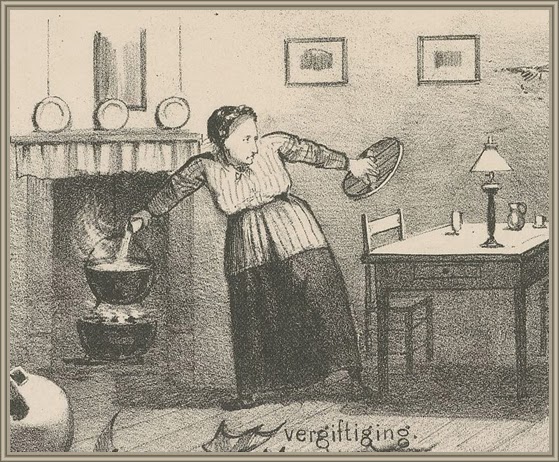 FULL TEXT: The horrible case of wholesale poisoning at Leyden came before the Criminal Court of the Hague on April 23. The prisoner is a woman of 46, noised Van de Linden. She is married and has several children. Since 1869 she has attempted to poison no less than 103 persons, and she tried to poison everybody who came in her way. It is proved, that she killed twenty-seven of her victims and that forty-five others became dangerously ill. Six times she endeavored to poison one of her sisters-in-law. The prisoner, however, is indicted for murdering three persons only. The Public Prosecutor maintains that the motive of the criminal was the obtaining money, which insurance societies would have to pay in case of illness or death. Van de Linden made her intended victims members of these societies, sometimes without their knowing it, and in such cases paying their contributions. It is certain, however, the woman poisoned several people whose illness or death could be of no pecuniary benefit to her. The prisoner has been carefully examined by three eminent medical men, who certify her sanity.

The events on which the trial is based took place in 1881 and 1883, and during this time she tried to kill 20 persons. The poison which she used was arsenic, which she mixed with the food or drink of her victims, and the drug was found in the bodies of some of them. There are in all about fifty-four witnesses who have been or will be examined.

The prisoner is a pale and ugly woman, with no expression of intelligence. She is defended by A. Vaillant, a young lawyer of great ability. At the close of the evidence to-day the prisoner, who at first strenuously denied the crimes with which she was charged, confessed the facts which form the subject of the prosecution, but she denies that she had any pecuniary motive, and it is thought that she may have committed these atrocious crimes when intoxicated.

At the opening of the poisoning trial on April 24th the prisoner fainted, and the court had to be adjourned for an hour. On her examination being resumed she confessed to two of the murders, but alleged that she did not intend to kill the people.

The public prosecutor then addressed the Court, and asked the President to pronounce a sentence of imprisonment for life. M. Vaillant, the prisoner’s advocate, in reply, contended that the case had not been. legally proved, but admitted that the prisoner was a monster, suffering from moral insanity. Sentence was deferred. 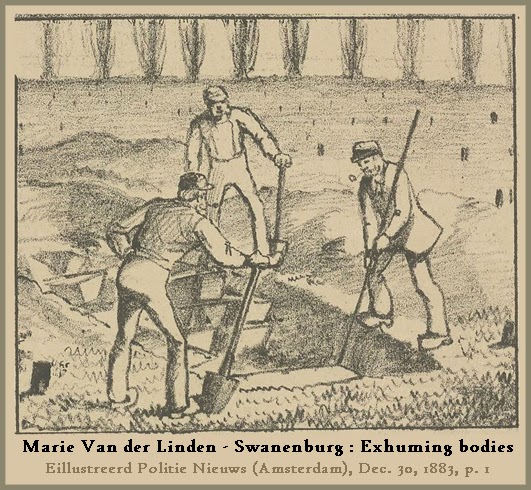 EXCERPT: She [Van der Linden, or, Swanenberg] went the length of marking down her victims beforehand. “It will be your turn in a month,” she openly told one man, who had been bemoaning the sudden death of a relative. The month passed, and this man was carried to his grave.

As I have said, an attempt was made to prove homicidal mania by the defence. A woman who killed on the most trifling excuse, or on none at all, to gain a mere pittance, or to settle a dispute, who threw arsenic to her own fowls, who laughed aloud at the torments of her victims on her sick beds, this woman could not be responsible for her acts. Yet the court would not accept this plea. Van der Linden [Swanenburg] was found guilty, and sentenced to perpetual seclusion. [pp. 311-2; Arthur Griffiths, Mysteries of Police and Crime: A General Survey of Wrongdoing and Its Pursuit, Volume 2, G. P. Putnam’s Sons, N. Y. 1899] 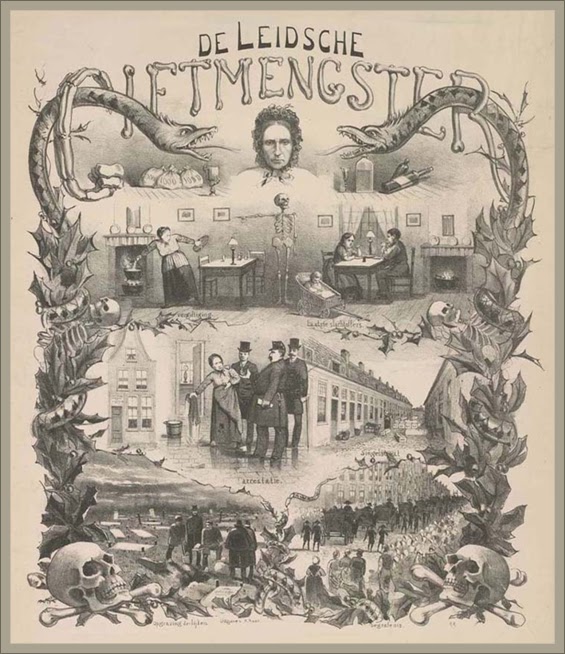 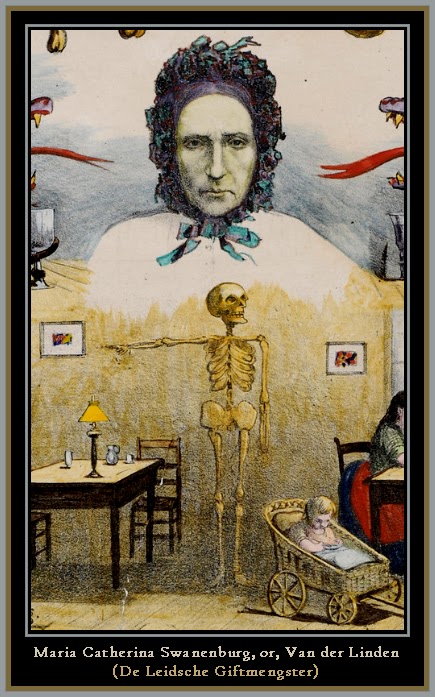 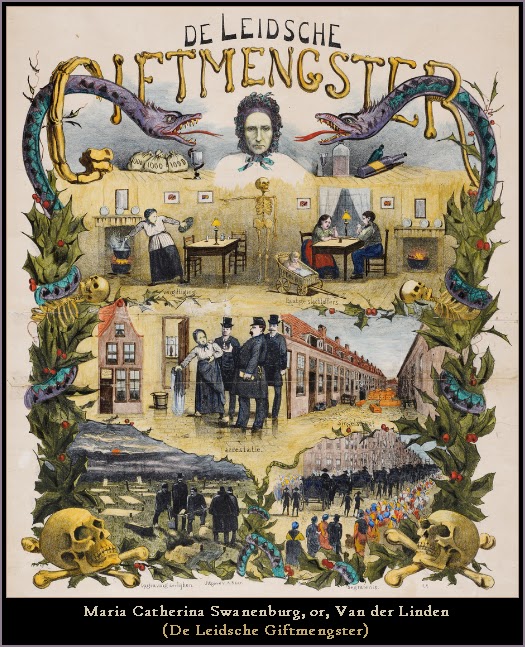 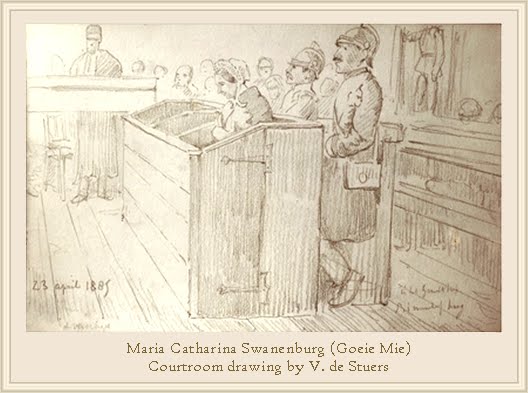 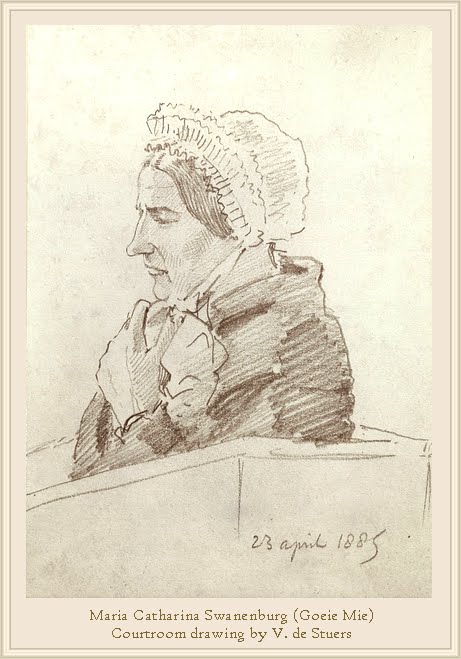 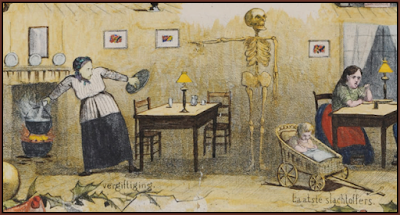