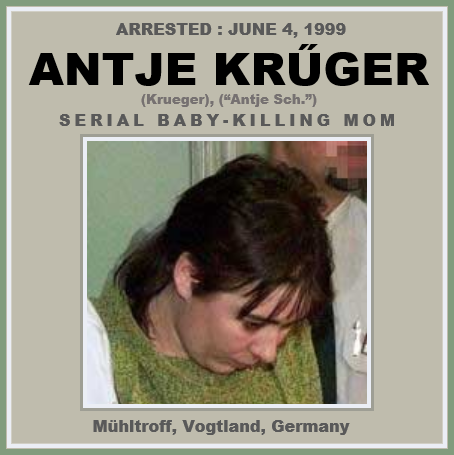 On an anonymous tip, Antje Krüger, (28) was brought to the gynecological clinic of the Vogtland-Klinikum Plauen on June 3, 1999 by the police for investigation.

She had secretly given birth to three children at home and killed in 1993, 1996 and 1999, the small bodies that they each packed in plastic bags and hidden in the freezer. That they were the children there for years when it reserved, covered with pizza and spinach until the police after the last birth to an anonymous complaint came back into the house.

Anjtje, when questioned about her girth during her three pregnancies, always denied being pregnant, even to family members. She even accused people of libeling her. She never visited a doctor.

In March 2000, Antje confessed before the District Court of Chemnitz, but made the incredible claim her husband had been unaware of the three pregnancies. She was sentenced to 13 ½ years in prison. While in prison she became involved with an abusive lesbian prisoner.

Because there was no evidence that he was present at the killings, the case against husband Jens Krüger, did not lead to an indictment. Yet kept the question open. Four years following Antje’s conviction, her husband, then 35, was finally charged. He was accused of instructing his wife to kill each baby shortly after birth. August 1993, a boy was strangled with the umbilical cord; in 1996 a second baby was choked to death with a paper tissue, and in May 1999, a girl choked to death with a diaper. Then the dead bodies were put in the freezer. 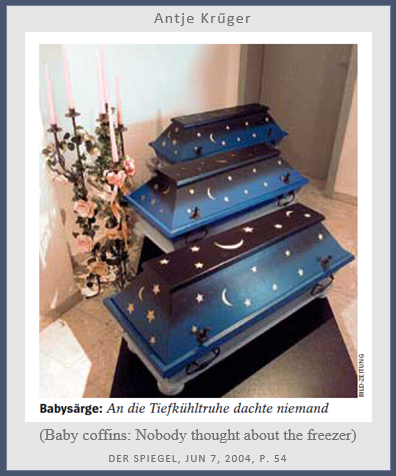 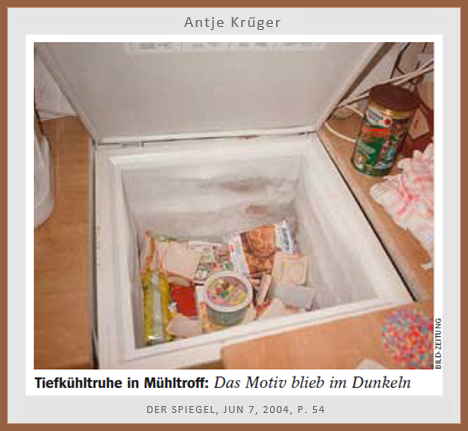