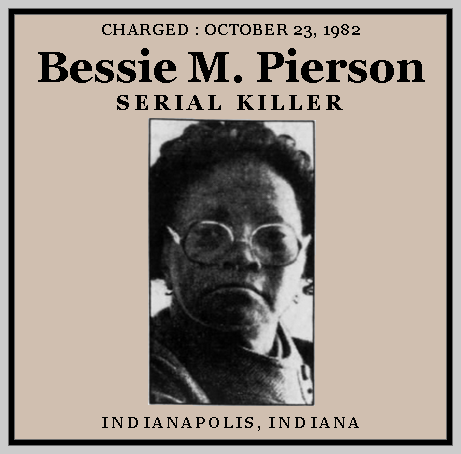 FULL TEXT: Police said a 65-year-old woman who claimed she killed three men likely will never be prosecuted for the deaths. Bessie M. Pierson, 65, Indianapolis, was charged with a second death after tests showed bullets were fired from the same gun used to shoot Robert L. Welch, Indianapolis, during the weekend. Mrs. Pierson was charged Monday with shooting of James Stewart, 85, Indianapolis who was found dead Friday. The third man has not been identified. Authorities said they doubted if Mrs. Pierson would stand trial for the deaths because she has a history of mental illness.

FULL TEXT: A 65-year-old woman, already under arrest for the shooting of her elderly neighbor, was charged with a second killing Monday [Oct. 25, 1982] and claimed to have committed a third, police said.

But investigators expressed doubt that Bessie M. Pierson, who has shuttled in and out of mental institutions for more than 15 years, ever would be prosecuted for the slayings.

Mrs. Pierson was charged with the murder of 85-year old James Stewart after ballistics tests showed he was killed by the same handgun that fatally wounded 78-year-old Robert L. Welch.

She was being held in Wishard Memorial Hospital for mental observation.

“Everybody realizes that this woman has a deep problem,” Homicide Detective Jon W. Layton said.

In the opinion of a son, Mrs. Pierson’s mental problems were so deep she should not have been living outside an institution when the two slayings with which she is charged took place.

“We couldn’t force her to stay (in institutions) and we couldn’t convince the doctors of the seriousness of her problems,” her son, John W. Sims of Southfield, Mich. Said Monday. She should have been in a controlled environment for years.”

Despite her mental history, which should bar her from receiving a gun permit. Indiana State Police issued Mrs. Pierson a permit last January, overriding a denial of her permit application by Indianapolis police.

Mrs. Pierson was described as very withdrawn and offered police little information after her arrest. But detectives believe she may have selected one murder victim at random because she wished to be apprehended for the earlier crime.

Stewart was found dead Friday in his apartment at 1820 Mansfield Street with a gunshot wound in her chest and bullet wounds in both feet. He is believed to have been killed Thursday [Oct. 28, 1982].

Welch was shot once in the back Saturday [Oct. 30, 1982] outside Mrs. Pierson’s apartment minutes after that incident. Of Welch, who is believed to have been a stranger to her, she told police.

“Something came over me. I felt bad to shoot him.”

Layton surmised that Mrs. Pierson may have shot Welch as a way to be captured for the Stewart shooting. Her family told police she has spoken of having a friend named “Jimmy,” and Stewart was known as “Brother Jimmy” in his near Westside neighborhood.

“In my opinion, she committed the second murder simply to get caught for the first one,” Layton said. She did it in front of witnesses: she did it in such a way that we would catch her and recover the gun.”

Homicide Detective Sgt. Louis J. Christ said he suspected a connection between Mrs. Pierson and Stewart when a woman identifying herself as “Bessie Tierson” called a police dispatcher Friday afternoon to ask about the elderly man’s whereabouts. Even Stewart’s neighbors and relatives had not yet inquired about him at that point, Christ said.

Mrs. Pierson reportedly has a slight lisp, which police say may account for the “Tierson” pronunciation.

Police waited to charge the woman until ballistics tests, completed Monday afternoon, concluded that her 22-caliber revolver had been used to shoot both Stewart and Welch.

All that was known about the third alleged murder is that Mrs. Person told Sims she had killed another man, whom she did not name.

“I still don’t understand it,” Christ said: “This is undoubtedly one of the strangest cases I’ve ever worked.” 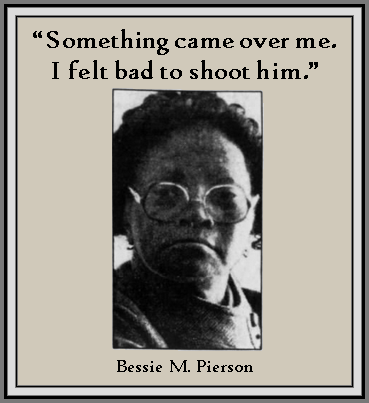