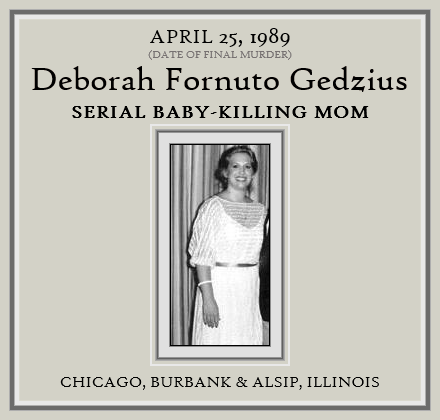 Deborah (or Debra) Fornuto gave birth to six children by three fathers. All but two died before they reached their first birthday, one made it six days past its first year, and another – perhaps because the mother sensed she was being watched – made it to two years. The deaths were, in each case, attributed to the vague “condition” called SIDS (Sudden Infant Death Syndrome), but rumors spread in the neighborhood – as early as death number three in 1976 – that the mother was a baby-killer.

It was not until the fourth death, the first child of Deborah’s third husband, that a formal investigation, challenging the SIDS hypothesis, was begun. It was instigated by the brother of Delos Gedzius – Harry Gedzius. His suspicions were not shared by the dead child’s father, nor by the rest of the Gedzius family. They saw him as a troublemaker.

Nevertheless, following the 2-year old’s death, the marriage fell apart. The Geldzius’s separated. It seems that Debora took up with a police officer. Delos Gedzius moved into an apartment in Merrionette Park. It was there that his body was found on April 25, 1989, a single bullet in his temple. He had been dead for several days. His life had been insured by Deborah for $100,000.

Despite the relentless efforts of Harry Gedzius, neither the deaths of the children nor of his brother brought indictments.

Deborah Anne Booe Narbone Gedzius was with her car, driven by Thomas Manniz, a felon, when it slammed into the post. Deborah died. Mannix, who was allegedly drunk at the time, survived. Harry Gedzius continued his quest for the truth, without resolution.

CHRONOLOGY
1955 – Deborah Anne Booe born.
Sep. 18, 1972 – Denise Marie Booe (5 mo) dies. #1.
May 21, 1975 – Jennifer Narbone (4 mo). #2.
Dec. 27, 1976 – Barbara Jean Narbone (6 mo) dies. (b Nov. 13, 1976). #3. Rumors held that the mother had killed the 3 babies.
Aug. 30, 1980 – Jason Gedzius born. Alsip.
Sep. 5, 1980 – Jason Gedzius (1 yr, 6 days) dies. #4.
After Sep. 5, 1980 – Harry Gedzius alerts medical examination office.
Feb.(?), 1982 – Delos Gedzius Jr. born.
Feb. 11, 1984 – Delos Gedzius Jr. (2) dies. #5. Harry G. again contacts med. Exam. Investigation was still in progress.
Mar. 21, 1987 – Daniel Gedzius (10 wks) dies. #6
Apr. 21, 1985 – Debbie and Delos dine in Crestwood to discuss divorce settlement. Debra meets paramour police officer.
Apr. 25, 1989 – Delos Gedzius (33), husband, body found. Shot in head. $100,000 life insurance.
Apr. 27, 1990 – Dr. Robert Stein, Cook County medical examiner, letter to the state's attorney's office; states homicide by suffocation as cause of all the infant deaths. Earlier this year (before May 1990 – Dr. Mary Jumbelic, a member of the medical examiner's staff, recommended that the cause of death for all of the children be changed to suffocation.
May 1990 – Harry Gedzius offers $3,000 reward for info leading to arrest of the murderer of his brother.
Before May 10, 1990 – Chicago police question Deborah Gedzius, in connection with all the deaths. A grand jury was convened, but Fornuto was never charged. A spokesman for the state's attorney's office, Jerry Lawrence, said Friday there was never enough evidence to file charges, but that all six cases remain open.
May 10, 1990 – Fornuto-Gedzius’s attorney Lawrence W. Levin accuses Chicago police and Merrionette Park police of misconduct for questioning her on 4 occasions im 1990 without his presence.
1990 – "Now I Lay Me Down to Sleep," TV documentary on the case, airs.
Late 1990s – Deborah moves to Las Vegas, Nevada, marries a Mr. Fornuto.
Sep. 2, 1997 – publication of Richard Firstman & Jamie Talan, The Death of Innocents, Bantam Books, (Waneta Hoyt case).
1997 – after research cast severe doubt on the prevailing view that SIDS could run in families, medical examiners took another look at the deaths. This time they revised their earlier rulings and pointedly called all of them undetermined. A second grand jury investigated Fornuto. But with no physical evidence linking her to the deaths, authorities needed an eyewitness or a confession, said Cook County Medical Examiner Edmund Donoghue. They got neither, and Fornuto was never charged.
Jul. 11, 2002 – Debora Gedzius dies in car wreck, Las Vegas, Nevada; Thomas Mannix, 32, felon was driver. 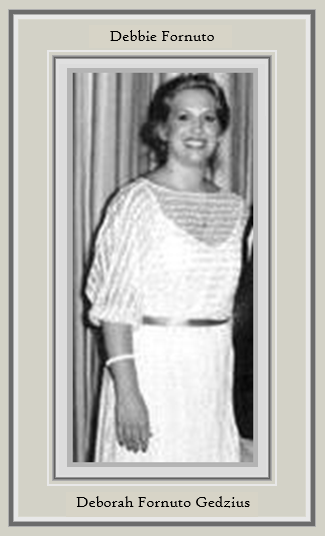 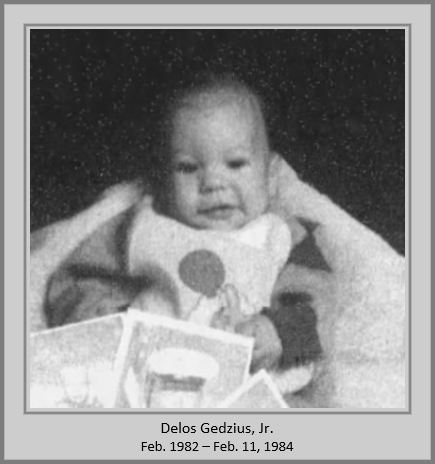 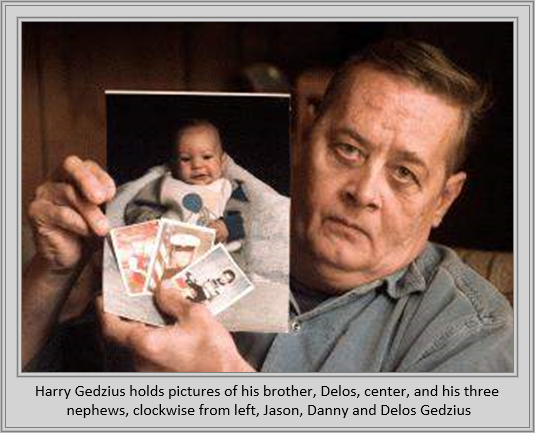 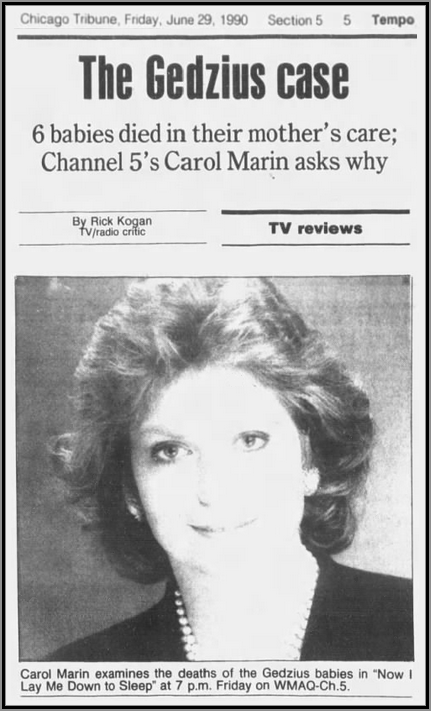 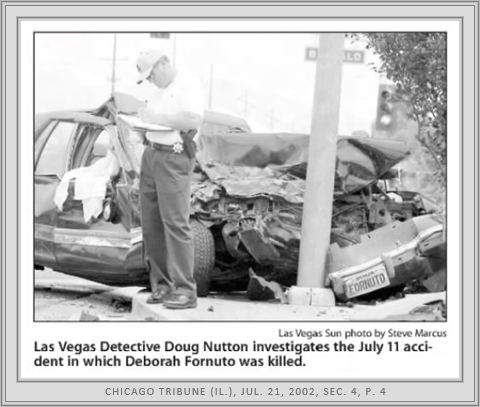