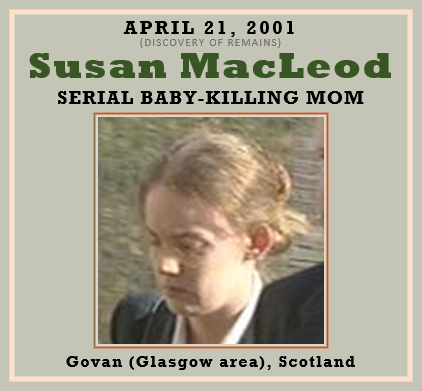 Scottswoman Susan MacLeod gave birth to three babies between 1996 and 2001. The mother seems to have suffocated each of them soon after birth, according to post mortem examiners. “Soon after they had died, all three of the babies were put in black carrier bags and left to rot in the foot of the wardrobe.” [McKay]

On April 21, 2001 police were called to her Govan (near Glasgow) home when the landlord’s children investigated the source of a bad odor that the neighbors had complained about. Susan “rented a bedroom in a two bedroomed flat and over the years different flatmates complained about the smell coming from her room. Some of them made cursory investigations, but nothing was found at first."

Susan pled guilty on Mar. 21, 2003 to “a reduced plea of culpable homicide was accepted on two charges. A third charge was dropped.”

Susan’s attorney told the court that psychiatric reports suggested her behavior may have been linked to the fact that she was severely sexually abused when she was young.

She was given bail in May 2001 on condition that she stay with her parents in North Bragar on Lewis Island. But in August, when she was 18 weeks pregnant, she violated the bail terms and travelled to Inverness to have an abortion.

One islander said: "They are horrendous allegations and in a tiny place like this, the whole community feels soiled. Most people think it is ridiculous. It is just Susan making excuses. She has always been an attention-seeker and it is typical of her to say something like this without having to back it up."

While on bail on Lewis, and already pregnant again, MacLeod would go out shopping and for coffees in a local cafe.  She attended her brother Steven's wedding with her boyfriend Neil Harper.  Another islander said: "She was up dancing most of the night as if nothing had happened. The locals were nice to her for the sake of her parents. They are a loving, well-respected pair." [Daily Record, 5/3/03]