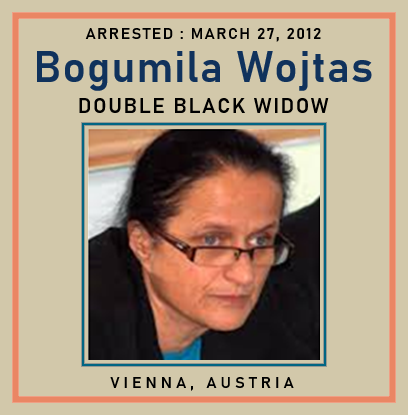 When Bogumila Wojtas moved from her home in Tuchów, Poland to Vienna in the Autumn of 2006 she took up work as a home aide. She lied to get work, claiming falsely that in Poland she had been a nurse, carrying a fake diploma to bolster the lie. Her first clients were two women who, apparently, suffered no harm at Bogumila’ hands.

In November 2009, Bougumila, then 49, met 68-year-old Herbert Ableidinger through a lonely hearts advertisement. She moved in with him and he signed over his assets to her. Less than a year later he was dead. Weeks following the Oct. 25, 2010 death she found Alois Fröschl (61) by the same means. The same procedure was repeated – but Alois did not follow through on his promise to sign over the deed his house to Bougumila. Nevertheless he was not long for this world and expired on February 14, 2011. Fröschl’s body was autopsied but the procedure was conducted in such a way that arsenic poising would not have been detected.

Suspicion had been aroused and investigation was initiated. The bodies of the two men are exhumed and high arsenic concentrations are found. On Mar. 27, 2012 Bogumila Wojtas (52) was arrested. She was charged with two murders on December 28, 2012. She was tried at the Regional Court, Krems, found guilty on both counts and was sentenced to life in prison. She appealed the sentence but, on November 15, 2013,  the penalty was confirmed by the Appeals Senate of the Higher Regional Court of Vienna

CHRONOLOGY
1960 (ca.) – Bogumila Wojtas born.
1983 – Wojtas has been married for 30 years and lived with the family in Tuchów in Poland.
Autumn 2006 – Bogumila Wojtas, from Poland, works for the first time in Austria as a home aide, looking after two women; there is no evidence of poisoning.
Nov. 2009 – Herbert Ableidinger (68) meets Bogumila (49?) through a newspaper lonely hearts ad. She moves in with him, he signs over his assets to her.
Oct. 25, 2010 – Herbert Ableidinger (68) dies.
Nov. 2010 – Bogumila Wojtas approaches Alois Fröschl (prosecutor), from Stratzdorf, and moves in with him. Eventually, “Alois F.” plans to sign his house over to her but did not follow through.
Feb. 14, 2011 – Alois Fröschl (61), Stratzdorf,  dies.
Feb. 19, 2011 – First suspicion: the corpse of Alois Fröschl  is being autopsied, but no blood poison is (yet) detectable by the blood-washing carried out before his death in the hospital.
Date? – the bodies of the two men are exhumed, high arsenic concentrations are found.
Mar. 27, 2012 – Bogumila Wojtas (52) is arrested
Dec. 28, 2012 – Bogumila Wojtas (52) is charged with two murders.
Apr. 11, 2013 – sentenced to life. Regional Court, Krems, Austria.
Nov. 15, 2013 – Appeals Senate of the Higher Regional Court of Vienna confirmed the
maximum sentence of life imprisonment. 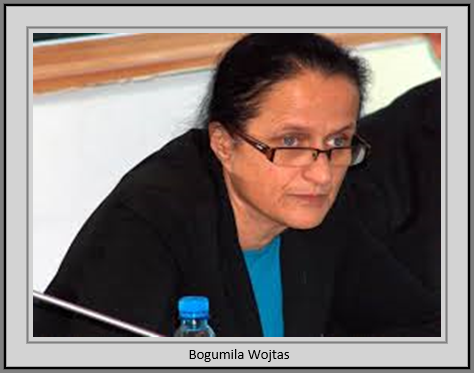 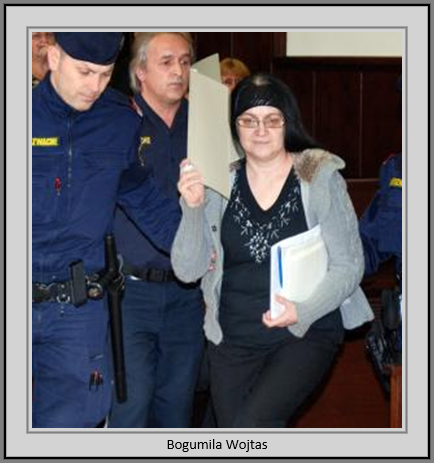