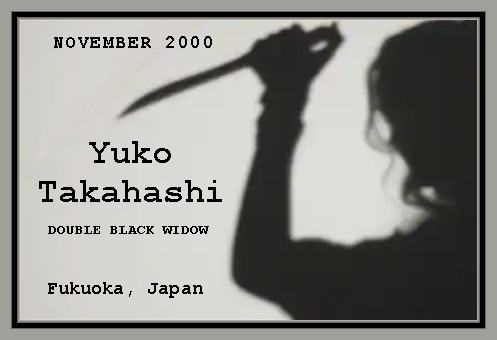 FULL TEXT: FUKUOKA – A 49-year-old woman pleaded guilty here Monday to killing her former husband in 1994 and second husband in 2000 with the help of her boyfriend.

Yuko Takahashi, a former bar owner in the Nakasu entertainment district of Fukuoka, also admitted to the Fukuoka District Court that she extorted 3.86 million yen from a customer whom she was dating.

In the opening session of her trial, Takahashi defied her lawyer’s advice and pleaded guilty. Takahashi’s admission came just after her lawyer had told the court that she would not be entering a plea.

“I have confessed to all the crimes, and I want to be tried,” Takahashi told the court. “I have spoken honestly to police. I want to atone for my sins, even though that might mean I will be executed.”

Kenichi Ide, 33, a company employee from Kobe, is accused of colluding with Takahashi in the murders. He refused to enter a plea after prosecutors rejected his lawyer’s request to present details of Ide’s role in the crimes during the day’s court session.

Takahashi allegedly fatally stabbed her ex-husband, Yuji Nomoto, 34, with a knife at her house in Shime, Fukuoka Prefecture, in October 1994.

Ide, who at that time was dating Takahashi and tutoring her child, is accused of conspiring with her in the murder. Takahashi apparently obtained 200 million yen in life insurance benefits from Nomoto’s death.

In November 2000, Takahashi allegedly drowned her second husband, Takayuki, 54, in a bathtub at their house in Fukuoka. His death apparently earned her 27 million yen in life insurance benefits.

Police initially concluded that Nomoto had stabbed himself to death, and decided that Takayuki Takahashi drowned accidentally.

Takahashi was a well-known bar owner in Nakasu, the most expensive entertainment district in Kyushu.

FULL TEXT: Fukuoka — The Fukuoka District Court sentenced a former bar owner to life imprisonment Thursday as sought by prosecutors for killing her husband in 1994 and then her next spouse in 2000. Yuko Takahashi, 51, was found guilty of stabbing her first husband Yuji Nomoto, 34, to death, with the help of her boyfriend, at their home in the town of Shime, Fukuoka Prefecture, in October 1994.

She was also convicted of drowning her next husband Takayuki Takahashi, then 54, without an accomplice in the bath of their home in the city of Fukuoka in November 2000. Takahashi's boyfriend Kenichi Ide, 36, a former home tutor, was sentenced to imprisonment of three years and six months. Prosecutors had demanded imprisonment of 12 years.

The acquittal was confirmed after prosecutors did not appeal the high court ruling by Wednesday -- the deadline for an appeal. "I just want them to leave me alone," Ide said in a comment released through his lawyer after the high court ruling. Ide used to serve as a home tutor for the eldest son of Takahashi between 1993 and 1994 while he was a graduate student at Kyushu University. Takahashi has been sentenced to life imprisonment by the Fukuoka District Court for killing her two former husbands in a bid to collect life insurance benefits. She has appealed the sentence.