Florence Nightingale & Her Disappointment With “Women’s Ways of Feeling” 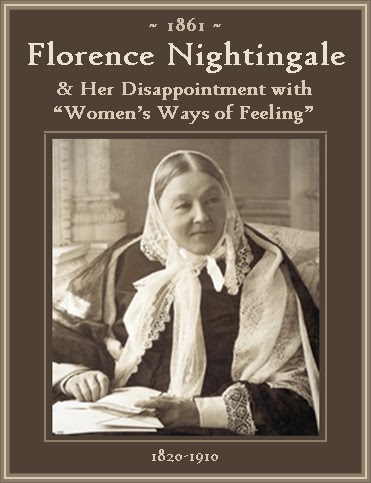 This item copies a post that appeared in reddit on the subreddit Red Pill, posted in June 9, 2013 by HumanSockPuppet.

Florence Nightingale [1820-1910] was a celebrated English social reformer and statistician, and the founder of modern nursing. She came to prominence while serving as a nurse during the Crimean War, where she tended to wounded soldiers. She was dubbed "The Lady with the Lamp" after her habit of making rounds at night. [Wikipedia]

Nightingale in these remarks contrasts Victorian stereotypes about women’s superior capacity for sympathy to her extensive experience with those persons whom she came across and worked with  during her remarkable and famous career serving the needy.

From reddit: I’ve been doing some reading on Florence Nightingale and I came across some fascinating commentary she made [in a letter] to a fiction writer [Madame Mohl] with regards to her misgivings about female nature.

Here are some choice quotes by Florence herself on the nature of women:

I have read half your book thro’, and am immensely charmed by it. But some things I disagree with and more I do not understand. This does not apply to the characters, but your conclusions, e.g. you say “women are more sympathetic than men”.

Now if I were to write a book out of my experience, I should begin Women have no sympathy. Yours is the tradition. Mine is the conviction of experience.

Now look at my experience of men. A statesman, past middle age, absorbed in politics for a quarter of a century, out of sympathy with me, remodels his whole life and policy - learns a science the driest, the most technical, the most difficult, that of administration, as far as it concerns the lives of men - not, as I learnt it, in the field from stirring experience, but by writing dry regulations in a London room by my sofa with me. This is what I call real sympathy.

Another (Alexander, whom I made Director-General) does very nearly the same thing. He is dead too. Clough, a poet born if ever there was one, takes to nursing administration in the same way, for me.

I only mention three whose whole lives were remodeled by sympathy for me. But I could mention very many others...

I have never found one woman who altered her life by one iota for me or my opinions.

Now just look at the degree in which women have sympathy - as far as my experience is concerned. And my experience of women is almost as large as Europe. And it is so intimate too. I have lived and slept in the same bed with English Countesses and Prussian Bauerinnen. No [other woman] has ever had charge of women of the different creeds that I have had. No woman has excited “passions” among women more than I have. Yet I leave no school behind me. My doctrines have taken no hold among women...and I attribute this to a want of sympathy.

It makes me mad, the Women’s Rights talk about “the want of a field” for them - when I know that I would gladly give £500 a year for a Woman Secretary. And two English Lady Superintendents have told me the same. And we can’t get one ... they don’t know the names of the Cabinet Ministers. They don’t know the offices at the Horse Guards...Now I’m sure I did not know these things. When I went to the Crimea I did not know a Colonel from a Corporal. But there are such things as Army Lists and Almanacs. Yet I never could find a woman who, out of sympathy, would consult one for my work.

I do believe I am “like a man,” as Parthe says. But how? In having sympathy.

Women crave for being loved, not for loving. They scream out at you for sympathy all day long, they are incapable of giving any in return, for they cannot remember your affairs long enough to do so...They cannot state a fact accurately to another, nor can that other attend to it accurately enough for it to become information. Now is not all this the result of want of sympathy?

I am sick with indignation at what wives and mothers will do of the most egregious selfishness. And people call it all maternal or conjugal affection, and think it pretty to say so. No, no, let each person tell the truth from his own experience.”


This post resulted from a suggestion by A Voice for Men editor TyphonBlue.