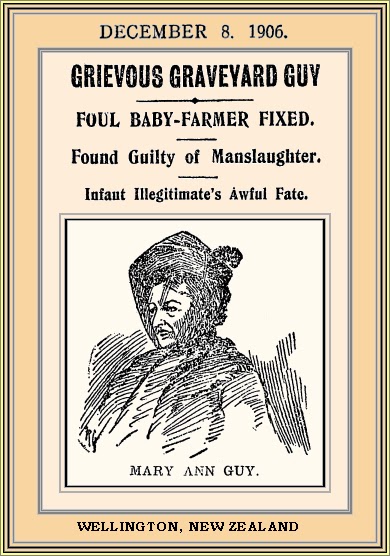 FULL TEXT: The woman who, for a consideration, undertakes the foster-mothering of stray infants, was much in evidence at the Criminal Court on Tuesday afternoon last when a weazened old hag, named Mary Ann Guy, stood her trial for the manslaughter of an infant female child. Death was brought about by neglect, the child was found to have suffered from a complication of diseases; but what stood out prominently was that the child, an illegitimate, had bean slowly and deliberately starved to death.

Mary Ann Guy has for some time past been a professional baby-farmer, out at Island Bay. When she was arrested on the charge of which she was convicted, five children, whose ages ran from two months to five years, were found on the. premises. Her home was unregistered, heir license having been taken from her, because she is of a greedy, grasping nature and had committed a breach of the Law by taking in more children than permitted.

It was for the sum of £20 that the wicked, old baby-farmer contracted to adopt the child Nellie B. Smith, the illegitimate daughter of a single woman named Bellair Smith. The child was born at Masterton on Dec. 4, 1904, and in April, 1905, an advertisement was inserted in the Wellington “Post” asking for some kind motherly person. to adopt the infant. Apparently ever on the look-out for such advertisements — as a statement by the accused showed that she had received a £40 premium from some other single woman who wished to be rid of her incumbrance and advertised so in the “Post” — the woman Smith was communicated with by the baby-trafficker, and to cut a long story short, Mary Ann Guy took the child in on the £or consideration, payable by instalments. It was not at any time very strong child. The mother visited her offspring at various times and manifested a deep affection for it. An application by the Guy woman to adopt the child as her own was refused by the Magistrate, and the baby-farmer continued to bleed the mother. She made demands for money over and above the £20 originally agreed upon, but, after yielding once to her demands, the young woman refused to submit to further blackmailing. In January of 1906 the child seemed well and it appeared to be healthy in later months. In September it began to fade away and it was dead on Sept. 16. It died, according to the hag’s story, at 2 a.m., or thereabouts, and it had, still according to the old woman, been fed on bread and milk about five o’clock and at midnight. She had in addition given the child of 20 months some lung balsam, which, it was proved, contained opium, because it had a cold. No doctor was requisitioned when the poor atom died, but on Monday Dr. Kemp was sent for, and he promptly asked the woman why she had not called in a doctor earlier and the reply was that she did not like to trouble a doctor on a Sunday. The matter was very naturally then reported to the Coroner. Constable Carmody visited the Island Bay Baby Farm, which is situated on Clyde r street, and took the body away. The woman was anxious to know whether an inquest would be held and being assured that such a course would be pursued she declared that she had nothing to fear, as she had done her duty by the child. How she had done that duty was told by Drs. Fyffe and Henry, who held a post-mortem examination. The body was terribly emaciated, the doctors said, and only weighed 14lb. 14oz, whereas it should have weighed just twice as much. Its lungs were diseased, and the opium had partly paralysed the nerves of the stomach. The primary cause of death was neglect and want of food. At the inquest, the woman, who had. not then been accused of causing the child’s death, made a statement in which she gave the history of her Island Bay baby farm, and her view of the reasons for the loss of her license as the keeper of a registered home. The child Nellie Smith, she declared, was not an intelligent one; it could speak but little and could not walk. It was a sickly child when she first took it in. She declared that she well attended to its every want. It was at that time elicited from her that Nellie Smith was not the only child that had died in her house. A baby, for which she received a premium of £40, had died, and it was in connection with the false registration of that child’s death that she committed another offence. 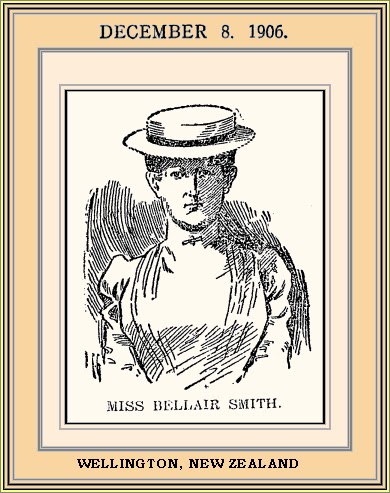 Mr Blair, who defended the harridan, had not much hope of gaining a acquittal, the doctors’ evidence being all together too damning. Only one thing could be said in the dreadful old woman’s favor, and that was that her house was kept very clean. Unable to get away from the fact that the child had been practically starved, the lawyer endeavored to reconcile the story that the old woman had, told as to having twice fed the child before its death, with the evidence of the doctors that no traces of food had been found in its stomach.

After His Honor had summed up, the jury, after nearly an hour’s retirement, convicted the old woman, who was remanded for sentence till Friday.

While the jury were considering her case, the prisoner pleaded guilty to a charge of having given false particulars concerning the death of a child named Gladys Vera Reeves, or Nicholls, this child being the one with whom the prisoner had received an adoption fee of £40. On this charge she was. also remanded for sentence till Friday.

When, yesterday morning, the prisoner stood up for sentence, Mr Blair had practically nothing to say for her except to plead for leniency on the ground of her old age.

The Chief Justice told the miserable old woman that she had been properly found guilty by the jury of killing a child by neglect and not giving it food and attention to preserve its life. One would have thought, His Honor said, that such a helpless infant would have appealed to the heart of any woman and cause her to have attended to it in sickness and distress. Had this been the first case of its kind with which she had been connected he might feel inclined to take a more merciful view of the case. He was, however, afraid that this was not the first infant she had had in her charge that had been neglected. Two children had died under her care. In one case a doctor. had been called in just before death, and he had giver a certificate, rather rashly, he thought, not having known the child’s state. The prisoner had then made a false declaration concerning the child’s death. By declaring it to be her son’s child, no doubt in order to avoid investigation by the. police, she had possibly thought to evade a prosecution. She had lost her license by taking in more children than the law allowed, and had. the evidence showed that she had neglected other children he would deal with her very severely. He would take into consideration her great age of 62 years. Her offence was a grave one. and seeing that it was of neglecting’ a poor, helpless child so as to cause its death he could not pass a less sentence than three years’ imprisonment.

On the charge of making a false statement a sentence of six month’s was imposed, to run concurrently with the previous sentence.