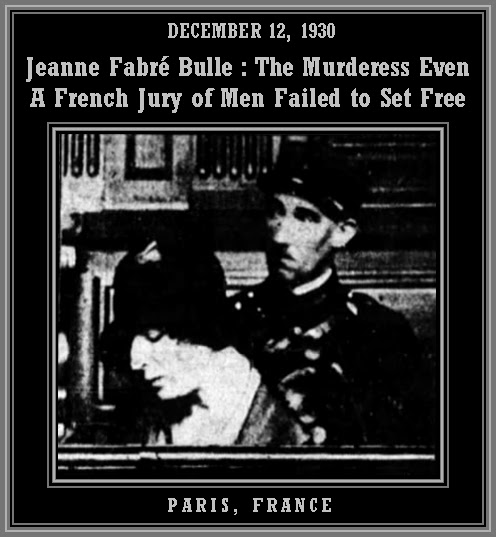 FULL TEXT: Paris, Dec. 12 – After two score women slayers have gone free or escaped with very light sentences in the Paris courts on the plea of “crime of passion” during the past few months, a jury of men has acted with sternness and sent an elegant middle-aged killer to 20 years of hard labor.

Mme. Fabre Bulle dignified, fashionably dressed wife of a wealthy clock maker, used all her feminine wiles in the dock to win the sympathy of the court, but she had committed a horrible double murder and her method was harsh and premeditated. The usual appeal of having been swept away by love fell flat.

Evidence showed that this woman, at the age of 48, bought a revolver and took lessons in marksmanship before she set to work on her victims.

A curious aspect of the case was the fact that for 20 years Mme. Fabre Bulle had been a loyal, faithful wife. The impulse for flirtation came to her while riding in a subway She was then 43 and she made the acquaintance of  Joseph. Merle, a well-to-do business man who was 12 years her junior. They fell in love and the woman deserted her husband, although Merle told her that he was living with Mme. Julliard, sweetheart of 49.

When the new love failed to defeat the old, Mme. Fabre Bulle sought to outshine her rival by moving into the Merle household. This went on for some time, with, both women seeking favor without any apparent advantage. Finally, with determined cruelty, the new-comer shot and killed Merle while he was asleep, and then turned her fire on her rival.

“He promised to break with her and he had begged me to divorce my husband,” said Mme. Fabre Bulle when she was asked in court for an explanation of her act. She kept her head bowed, but tried to use her attractive eyes with mournful effect, though her attitude during the trial was one of patient boredom. Some women slayers had put it over and she, with wealth and distinction, seemed to feel secure. After describing the double killing she said:

“Why should I say any more since no one will believe? I tried to kill myself but the trigger was caught and nothing happened I wandered about the place not knowing what to do next.”

Evidence showed that she had fled to her husband’s home, but she could not arouse the servants. Scantily dressed, she wandered about the woods during the night, and in the morning stumbled into a police station, barefoot and tired. Medical evidence revealed that both victims might have been saved if an alarm had been given in time. This gave the fair accused a chance to fall in a faint.

When the husband was called to the stand he begged the court to try to understand him. He said:

“I am overwhelmed, but I must emphasize that for 20 years this unfortunate woman was devoted and respectable wife. What happened? What mysterious force dragged her into this gulf it is a mystery. “I am divorced now. She is only a stranger to me. What she did was so unbelievable, so difficult to understand. She was the last person in the world I would have expected to enact such a tragedy. She herself closed the door of her home and never opened it again.”

The jury deliberated for less than an hour and found the woman guilty on every point raised. They agreed to “extenuating circumstances,” which saved her from a sentence to death in addition, she was fined 220,000 francs, which will go to relatives of her victims. When she heard the verdict, Mme. Fabre Bulle fainted again, but this time she did a very serious job of it. 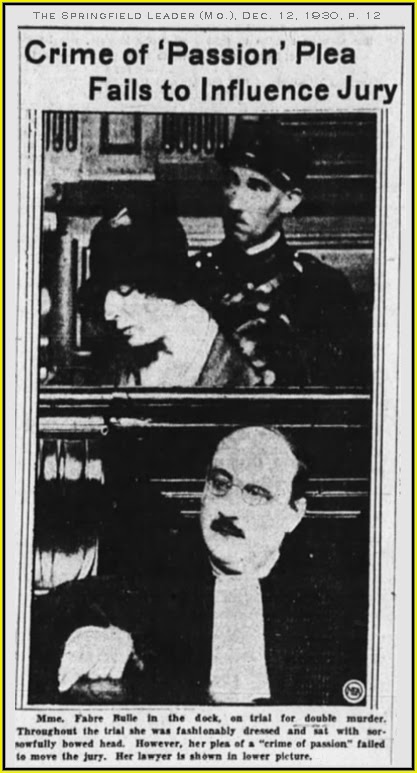