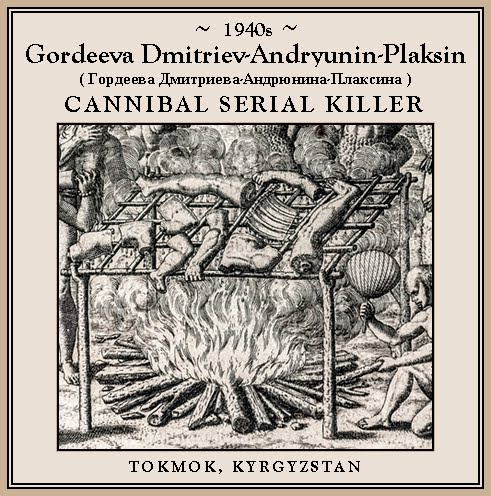 EXCERPT (Translated from Russian): The first recorded fact of cannibalism dates back to the 1940s. Then, in the village of Tokmok in Kyrgyzstan, a certain Gordeeva Dmitriev Andryunin Plaksin (known commonly as “Plaskin”) was detained. The investigation could not establish her real name and surname. Detectives established that she had killed and ate five women in the Chui Valley, and before that – wandering throughout Russia, Central Asia, Kazakhstan and Siberia – more than forty.

“I sometimes salted meat, often ate fresh. She made cutlets from buttocks and thighs, she loved to fry brains, and made scrambled eggs from eyeballs, she shocked the investigators with her revelations.”

Plaskin even planned to eat her own little son, who was specially taken to the photo studio so she could have a souvenir. At the last moment, she decided to destroy him. She characterised her tendency to anthropophagy, – that is: eating human meat and blood – as "attacks." And she could not restrain herself.  Plaskin was sentenced to 25 years in prison camp and her assets were  confiscated. In the 1960s Plaskin petitioned for clemency, which was not granted.