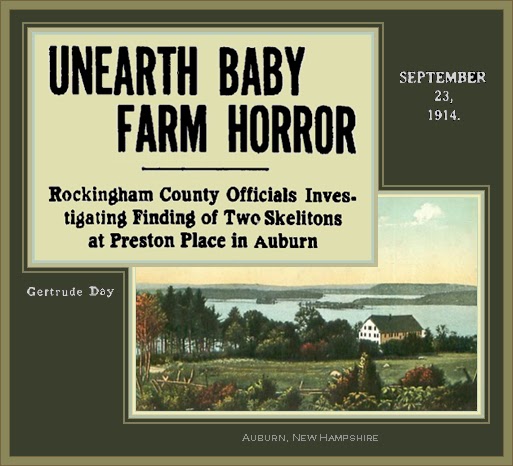 FULL TEXT (Article 1 of 2): Solicitor Ernest L.. Guptill and Sheriff Ceylon Spinney of Rockingham county unearthed a horrible series of crimes Tuesday at Auburn on the site of a baby farm. Two skeletons of presumably murdered people were dug out, one of a child and one of an adult.

In the town of Auburn is a large farm, which was formerly owned by Frank Preston, one of the lending citizens of the town. Mr. Preston sold it to a woman who came about four years ago from nobody knows where, and who went by the name of Miss Gertrude Day.

Miss Day did not pay for the place in cash, but bought with a mortgage, and undertook to conduct an ordinary country farm. In a few months, however, the townspeople noticed than she was caring for several babies at the farm and had a staff of nurses and assistants, who looked after the little ones.

People came more and more frequently with babies in automobiles and left them with Miss Day. They usually came by night in covered vehicles, either carriages or limousines. Miss Day mingled very little in a social way with the other people in the neighborhood but some say that she  referred to the children as sent from charitable institutions. Rumor in Auburn was however, that the .babies were practically all private patients.

During the latter part of 1910 women approaching motherhood went to Miss Day’s place and bore their children. Some Manchester doctors were called there on cases, it is said. As a rule there were 20 babies at the place at one time.

Miss Day changed her name to Carter after a while and notified the post office to this effect. Much mall came to a Miss Curler and she received it. She went more and more by the name of Carter and finally brought a man to the farm whom she introduced to a few people as Mr. Carter and her husband.

Near \\w residence at the farm was an old well, not very deep. The Carters would not allow anybody to get water from the well, although there was an old fashioned bucket attached to it and it had been used by the Prestons and everybody else who lived on the place .before the Carters for drinking water. But rather than get water from this well the Carters would go a considerable distances and inconvenience to get water somewhere else and they obliged everyone who was on the farm to do the same.

This lad to the very common, report about town that the babies were put out of the way by being deposited in the old well. This evidently came to the ears of Miss or Mrs. Carter during the summer of 1911 for she had the well filled up with dirt to the very top. Then Mr. Carter disappeared,. She said he had gone away and died of pneumonia.

A body was shipped from somewhere to the Carter home and there was a funeral for Mr. Carter. But it was then stated that friends of Carter here have seen him at some of his old haunts.

Criticism of the sudden decease of her husband and the increasing talk about the procession of babies from Manchester to the Carter place led the Carter woman to endeavor to sell the place. She was caustic, it is said, in her criticism of the folks of Auburn for talking about her.

She married again a man by the name of Alonzo Dexter, whom nobody seemed to know much about. He is said to have come from outside and was not well acquainted in that vicinity. He said the proprietress of the farm soon had a child. Dexter left her and took up residence in Manchester and is now believed to be living there, although he is not recorded in the latest registry.

The county authorities know Dexter and they believe Carter is still around and about. The woman abandoned the farm after Dexter left, forfeiting the large amount of money which she had paid the farmer owners as part payments for the place on the mortgage. It is said she did not seek to recover one cent from the property, but acted glad in getting off the place.

Recently Michael Mitchell, a French speaking farmer, bought the former baby farm. He had occasion to do a little repairing and renovating and Tuesday morning in scraping off the top of what was formerly the well, he and the workmen came across a mess of bones.

Sheriff Spinney and Solicitor Guptill were called from the city and they dug down and got part of the skeleton of a child, who was about six or seven years old when thrown there dead, and part of a skeleton of an adult. It is not known what sex either skeleton was.

Matted in the bones were flesh tissues partly rotted away and a pair of baby’s shoes. Dr. L. G. Dearborn of Derry, medical referee, viewed the remains. It is hinted by the neighbors that if the old well is dug out some more that a large mess of such stuff will be unearthed.

The Rockingham County authorities will probe the matter to the very limit.

FULL TEXT (Article 2 of 2): In the case of the baby farm revelations, the whole town of Auburn is stirred. For four years there has been a suspicion that this nefarious business was being secretly carried on at several places and in 1910 and 1911 the Carter establishment had a big notoriety.

The discovery of the skeletons in the old well was therefore not much of a surprise to some of the people who were familiar with the history of the place, Solicitor Ernest L. Guptill and Sheriff Ceylon Spinney are doing everything they can to bring the true facts to light and to find out if possible who was murdered, and who the murderess was.

Neighbors are being interviewed and careful search of the premises is being undertaken. It has been such a long time since the Carter woman removed to Manchester with her effects that many incidents in connection with the conduct of the alleged baby farm have been forgotten. Nobody seems to know where the woman is, or where her first husband, Carter, is or whether or not he is dead.