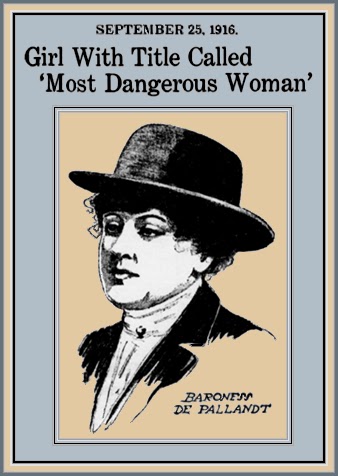 FULL TEXT (Article 1 of 4): Dr. Ernest Villiers Appleby, formerly professor of chemistry at the University of Minnesota, is suing Baroness de Pallandt, formerly May Dugas of Menominee, Mich., in the high court of England, in the sum of $20,000, the suit evolving around the purchase of a pearl necklace for which the baroness failed to reimburse him. Now he claims his “soulmate” was an adventuress before and after she became a member of the nobility. During a hearing of the case recently the baroness gasped in astonishment when she was shown a copy of the picture herewith shown, which is a copy of one in the rogues’ gallery of the San Francisco police department. It was taken in 1880, when, it is claimed, she was arrested while a leader of the night life set of the coast city. 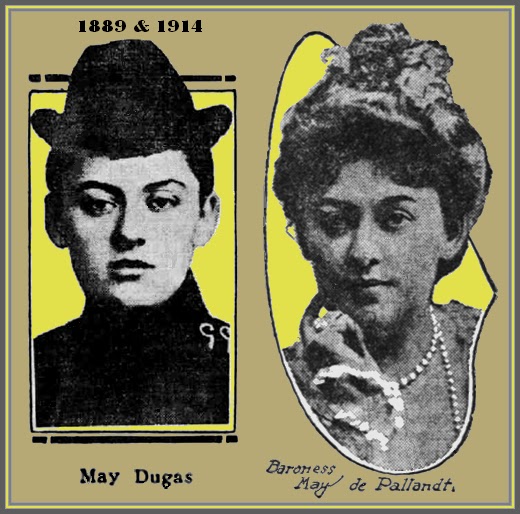 FULL TEXT (Article 2 of 4): Menominee, Mich., Sept. 25. – “Dangerous Girl” was not written about May Dugas of Menominee, either before or other she met and married Baron de Pallandt von Erdeberdt, master of hounds for the princess of Wales when Victoria was queen. It was William Pinkerton, detective, who called her “the most dangerous woman I ever met” – police of three continents having by then taken note of her comings and goings.

Now the baroness is being sued in her old home town by a girlhood friend, Franc Gray Shaver, woman attorney of Highland Park, Ill., and Menominee.

Miss Shaver charges the baroness, under guise of friendship, deprived her of property worth $99,000 through fraud and false promises.

Testimony in Menominee district court is to cover the wanderings of May Dugas since she left. Menominee, and will include, it is said, stories of “Badger games” worked in the underworld of American cities, in which her brother Jean posed as her husband, after the baron had paid her $10,000 to get a divorce.

High society, in which the baroness moved alternately with alleged operations in the nether life, also will be brought in.

‘Tis charged the baroness in 1901 helped a daughter-in-law of Mark Hanna evade writs and flee to Europe with her children.

Her adventurous past came to light only in 1914, when she was sued in London on a $10,000 fraud charge by Dr. E. V. Appleby, ex-professor of chemistry in the University of Minnesota. The baroness was born in Western Michigan. Her father, Eugene Dugas, struggling attorney, moved to Menominee when she was 16. Here for several years she was the town belle, but excursions to Milwaukee and Chicago gave her a taste of high life.

On a trip around the world by way of Japan she met the baron and captivated him. He charged her with fleecing his friends before he divorced her.

Miss Shaver is suing for $125,000 which she alleged was taken from her by the defendant through misrepresentations.

Drawing of the jury was begun immediately after the case was called. Difficulty was anticipated in securing the twelve men because of the wide publicity given the suit. The baroness and Miss Shaver were both present. Miss Shaver has begun suit against Paul and Jean Dugas, brothers of the baroness, for smaller amounts, claiming they aided in misrepresentations of the baroness.

Counsel for Miss Shaver says that under the terms of an agreement, Miss Shaver, who abandoned a legal profession to become the companion of the baroness, transferred money and stocks to the latter. The agreement provided the two women were to live together for life, and out of dividends for stocks, the baroness was to pay the living expenses of Miss Shaver. Instead of a sincere friendship, Miss Shaver contends that the baroness’ interest in her proved only pretended admiration in furtherance of a conspiracy to robber her of her property as part of the alleged conspiracy.

Miss Shaver asserted an offer was made by a brother of the baroness to marry her. Miss Shaver inherited $15,000 from her father, who lived in Pittsburgh, and who was a large holder of stock in an airbrake company.

In reply to Miss Shaver’s suit, die baroness alleged that Miss Shaver instituted a general relief of all claims against her. The baroness was formerly Miss May Dugas of Menomonie. having acquired her title by marrying a French nobleman. Since then she has teen divorced, but still retains the title. She lived in Menomonie until recently and previous to the trial has been located in New York.

The suit is one which has attracted national interest, because of the fact that the baroness has been written about so frequently by American and European writers during her career.

***
FULL TEXT (Article 4 of 4): I got a penny postal card from Menominee, Michigan, the other day and what it said on it is utterly of no interest to any one except me, but the name Menominee stirred some long relaxed dust and I thought back across the years to an adolescent who in 1920 became infatuated with probably the most alluring woman ever born. May Dugas will 10 years this September and I don’t mind at all that I was one of a long, line of victims who made her a rich woman. She never paid back the 25 cents I gave her, but that’s all right. The men who gave her $100,000 and more each never minded, either.

May was 51 and I was 19 when I met her in Mexico. She came to our house wearing notoriety like a flaming carnage. She was brought then by a Mexican politician, remained for dinner and, after dinner, borrowed the quarter from me. I would have given her two quarters by that time, for recklessness lay across my shoulders like a cloak. She was beautiful, she had skin like a pearl and the knew every one. The only trouble was that most of the people she had known were thousands of dollars poorer after meeting her. She never amassed a dollar without causing explosion in some one’s life. She even exploded for two hours into my daft life, giving me six or seven months of anguish, before I got over her influence.

Not even my mother, who bade her good night with exquisite courtesy and then murmured, “Have you still got your wallet?” to my father as the door closed, was greatly resentful that May Dugas had remained for dinner.

It was part of her magic that she charmed women, too. May was brought up in Menominee, after being born in Canada. She must have been about 14 years old before the son of the town’s wealthiest family parted with what was for him considerable money. It was about 11:00. It caused him to be whisked off to a distant college and it caused May to sit down and do some thinking. Men made money, men were foolish about money, men were foolish about women: ergo, men could be separated from their money.

Four years later the Chicago police had her detained for trying to pry $25,000 out of a startled man who was confronted May’s “husband.” The police had occasion to discuss things with her several times in the next few years, but no felonies ever charged. Eventually, she met a Guatemalan planter named Senor Don Luis de Mato and from him she got the first $100,000, plus certain jewels the size of walnuts. They call these jewels diamonds in the trade and not one of them was phony.

In Don Luis May got her first lesson in estimating suckers. She wanted more. Luis wouldn’t give it, she threatened blackmail. Luis laughed at her. He wasn’t frightened by blackmail and suggested that she go ahead. Thereafter, May never put the clamps on a man who was unafraid. The police of Chicago, weary of this artful child, suggested she take a trip. She smiled cooperatively and suggested Peoria or Cicero. They smiled back and suggested something more exotic to fit her tastes. Would Shanghai do for her? Left with small choice, she took Shanghai. Within six months an American mining engineer proposed marriage and, when it developed that he had a wife and children, May found that about $15,000 cash in American dollars would repair her cracked heart. Soon thereafter, the only son of a wealthy New York Importer found that putting pen to paper too often is costly. His father sent May $50,000 for the letters. The boy later killed himself in a New York hotel, his desk covered with hysterical letters to May.

Once a professor of the University of Minnesota inherited a million dollars. He met May and bought her a private house on the Thames near London. Soon after, she met a millionaire mining man and the three became, as the saying goes, a threesome. The professor gave May a 70-gram black pearl which later figured in an insurance brawl and in 1920 May was back in the United Stales, then went to Mexico. She hornswoggled her way into a mineral rights deal with a mining concern, and the Mexican government, received $250,000 for her share and in 1921 returned to Europe for good where, in 1940, she died.

Old man Pinkerton himself, as a hired detective for the late Kaiser of Germany; said this of May: “She is heartless, coldblooded, the most dangerous woman I ever met in my life.”

Maybe, but to me at 19 she was indescribably lovely. Come to think about if I ought to be the bitterest of all the boys. Of what possible use to May Dugas was an American 25-cent piece in Mexico City where she was on the edge of winning $250,000? Maybe it was just against May’s code to meet any man and let him go scot-free.