Betty the Blackmailer & Her Famous Ankles - 1919 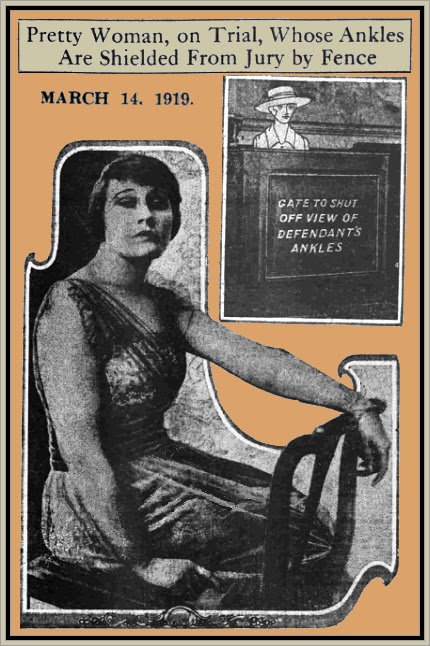 PHOTO CAPTION: Woman, on Trial, Whose Ankles Are Shielded From Jury by Fence – An innovation has been sprung in preparation made for the trial of Mrs. Inch in the criminal branch of the New York Supreme Court. It is a partition about the base of the witness stand, preventing any view by the jury of the witness’ feet. At a previous trial the prosecuting attorney complained that the jury's attention had been distracted by the defendant's pretty ankles.

FULL TEXT: New York. March 14. – The “spite fence” erected in front of. the witness stand to prevent befuddlement of Jurors should there to an inch or so of display of silk stockings by Mrs. Betty Inch, pretty and shapely actress. On trial for alleged extortion of $215 from William P. Herrman, caused embarrassment to court at attendants hurrying to aid Mr. Herrmann, second witness for the presecution, who had fainted in the witness chair.

During the hearing, Mrs. Inch appealed to Eugene McGee, of her counsel, to insist that John Markey, one of Assistant District Attorney Talley’s clerks, find some other object than her shapely feet to attract his attention. He spent the entire day. She declared in gazing. When she discovered that her feet interested him. She complained to her lawyer. The clerk was asked to change his line of vision.

Mrs. Hermann testified that a woman who said she was “May Hayes,” but whose voice she recognized later as that of the defendant actress, offered over the telephone on June 14, to furnish her with evidence for a divorce from her husband who, she said, with a friend, had entertained two women overnight in his apartment. A trap was laid, $215 in marked money was handed over, and the defendant was arrested, witness testified.

The solid oak fence around the witness chair arises fully four feet above the ankle line. It is of oak so solid that even old Madame X’s justly celebrated rays would have a hard time the solidity of the spite fence. Nothing can be seen of Betty save her head and shoulders – and no fair, either, for any lady defendant to take the witness chair wearing a low-necked gown. 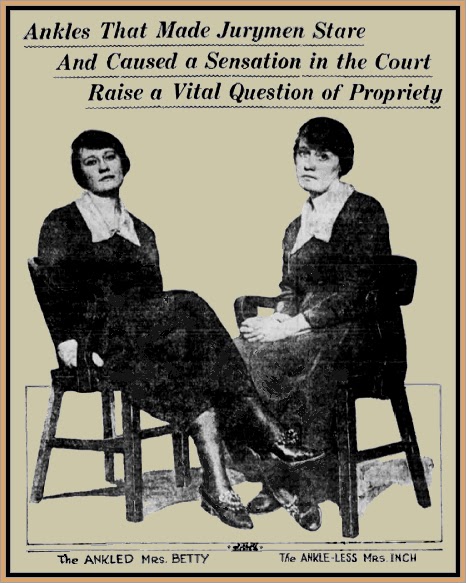 Nobody knows who ordered it built. Justice Vernon M. Davis, who is presiding at the second trial of Betty, was quoted by a friend as saying that he had no part in ordering the building of the calf pen – or whenever it was Justice Davis called the fence.

After the first trial of Betty ended about a month ago, with a disagreement, Chief Assistant Talley was quoted as saying, in effect: “When Betty Inch comes up for trial again, you may depend upon it that she will not be permitted to show her ankles to the jury as she did in the first trial. If she raises her skirts too high while in the witness chair the next time, court will be asked to make her pull them down.”