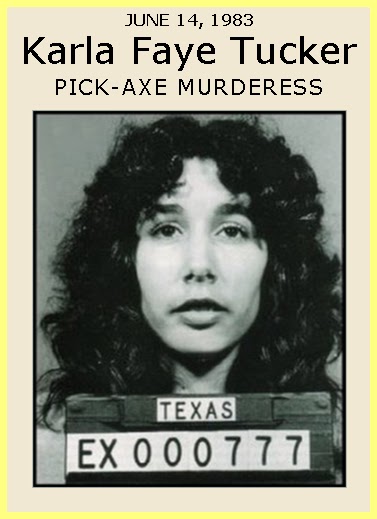 From Wikipedia: Karla Faye Tucker (November 18, 1959 – February 3, 1998) was convicted of murder in Texas in 1984 and put to death fourteen years later. She was the first woman to be executed in the United States since 1984, and the first in Texas since 1863. Because of her gender and widely publicized conversion to Christianity, she inspired an unusually large national and international movement advocating the commutation of her sentence to life imprisonment, a movement which included a few foreign government officials.

After having spent the weekend doing drugs with her boyfriend Danny Garrett and their friends, Tucker and Garrett entered Jerry Dean's home around 3 am on Monday 14 June 1983 intending to steal Dean's motorcycle. James Leibrant, a friend, went with them to Dean's apartment complex. Leibrant reported that he went looking for Dean's El Camino while Tucker and Garrett entered the apartment with a set of keys that Tucker claimed Shawn Dean had lost and Tucker had found.

During the burglary, Tucker and Garrett entered Dean's bedroom, where Tucker sat on him. In an effort to protect himself, Dean grabbed Tucker above the elbows, whereupon Garrett intervened. Garrett struck Dean numerous times in the back of the head with a hammer he found on the floor. After hitting Dean, Garrett left the room to carry motorcycle parts out of the apartment. Tucker remained in the bedroom.

The blows Garrett had dealt Dean caused his head to become unhinged from his neck and his breathing passages to fill with fluid. He began making a "gurgling" sound characteristic of this type of injury. Tucker wanted to "stop him from making that noise" and attacked him with a pickaxe. Garrett then re-entered the room and dealt Dean a final blow in the chest.

Garrett left the bedroom again so as to continue loading Dean's motorcycle parts into his Ranchero. Tucker was once again left in the room and only then noticed a woman who had hidden under the bed covers against the wall. The woman, Deborah Thornton, had met Dean at a party earlier that afternoon. Upon discovering Thornton, Tucker grazed her shoulder with the pickaxe. Thornton and Tucker began to struggle, but Garrett returned and separated them. Tucker proceeded to hit Thornton repeatedly with the pickaxe and then embedded the axe in her heart. Tucker would later tell friends and testify that she experienced intense multiple orgasms with each blow of the pickaxe.

The next morning, a co-worker of Dean's who had been waiting for a ride entered the apartment and discovered the victims' bodies. Investigation led to the arrests of Tucker and Garrett.