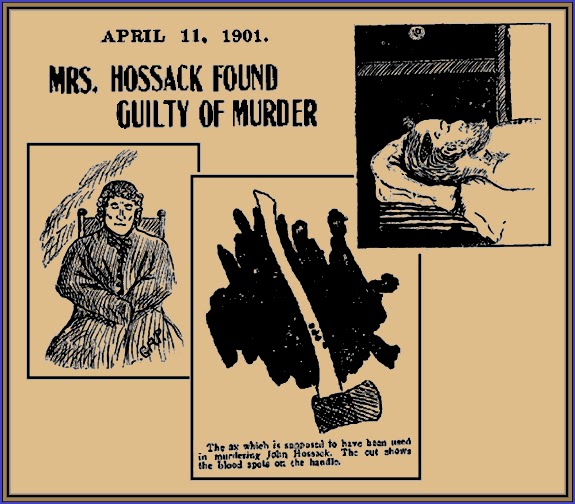 Waterloo, Iowa – John Hossack was a prominent and prosperous farmer who moved into Warren county from Canada a third of a century ago. Sometime during the Saturday of' Thanksgiving week last November [1900], Hossack was murdered while in bed and asleep, he being struck with the sharp blade of an axe over and slightly behind the right ear. The stricken man lived until the next morning but he did not regain consciousness, and there remained naught but circumstantial evidence by which to fasten the crime upon the guilty party. Mrs. [Margaret] Hossack had gone to bed with her husband in a parlor room down stairs, two sons sleeping in an adjoining room and two others up stairs. Mrs. Hossack, who was arrested while attending her husband’s funeral, testified that she was awakened by some noise like the slamming of a door, saw a flash of light and immediately called out her husband’s name, “John!” She testified that as he did not answer she made a light and then found her husband with a terrible gaping wound in his head. A man to have murdered Hossack as it was done would have had to cross the porch, go through the room where two sons were sleeping, and then reach over the wife and hit the husband. the axe was found next day under a farm building and was covered with blood and hair that showed for what purpose it had been used. The evidence was circumstantial, but everything pointed to Mrs. Hossack’s guilt. Hossack was an old school Presbyterian, honest as the day was long, successful and prosperous, and respected and honored by all who know him. However, it was claimed at the trial that he and his wife had bitter jangles. Mrs. Hossack was arrested charged with the murder of the husband and Thursday morning found her guilty of murder in the first degree, the penalty for which is imprisonment for life in the state penitentiary.

[Headline taken from very long article: “Mrs. Hossack Guilty Of Murder In First Degree – Mrs. Hossack Found Guilty of Murder – Tragic Scene In The Court House of Indianola. – Woman After The Jury Retires Breaks Down And Sobs – Her Children Join With Her and Still Believe Her Innocent.” The Des Moines Daily Capital (Io.), Apr. 11, 1901, p. 1]

[Illustrations from: “Mrs. Hossack May Yet Be Proven Innocent – Tide of Sentiment Turns Slightly in Her Favor – Notified Today That She Will Soon Be Released First Photograph Bearing on the Tragedy.” Des Moines Daily News (Io.), Dec. 12, 1900, p. 1]