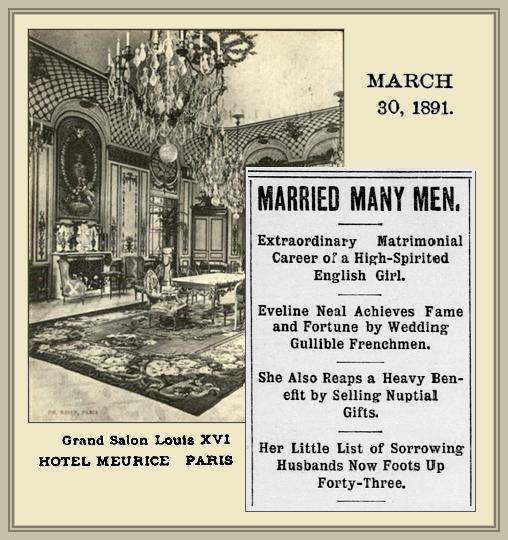 Note: The paragraph and heading style used in the original newspaper article has been preserved. Other sources give her name as "Leal," rather than "Neal."

FULL TEXT: London, March 29.— The story of the woman who married forty-three husbands, brief reference to which was made in yesterday’s report, has no equal in the criminal annals of modern times. Eveline Neal is the child of a well-to-do farmer in Shropshire, the fertility of whose acres made it an easy matter to provide handsomely for his family, composed of one daughter and three sons. Eveline, like many others in the same position, being the pet of her father and brothers, and fairly good looking, soon learned to command, and grew up in the belief that mankind as created to do her homage and minister to her wishes. How early she started in her present career is not yet known, but, as she is still young, if not in the heyday of youth, it is supposed that she early entered the crooked paths in which she has since strayed. Eveline’s methods were admirable in their simplicity.

Fearing that the sturdy common sense of the majority of her countrymen might not prove favorable to her schemes, she long since transferred herself and her belongings to French soil, finding in Paris, and the general practice of patronizing

and answering advertisements holding out attractive inducements to commit matrimony, a congenial atmosphere and much encouragement. Behold her, then, located in the gay capital, if she could be said to have a location when the necessities of her trade compelled her to be as locomotive as a grasshopper and quite protean in her many disguises. Of course, a woman of Miss Neal’s genius could not adhere slavishly to any particular method. She had many, but a favorite scheme, and one that won her much wealth, was the announcement in the journals that she was a widow, with a fortune varying in different advertisements from 200,000 to 1,000,000 francs, and desired to marry a gentleman in good circumstances belonging to “high life” if not to the nobility, or to the select circles of commerce. Answers were directed to be sent addressed poste restante, where they were called for by an accomplice. The latter then selected such of the replies as madam was pleased with and made appointments for an interview, not with the English maiden, but only with her friend. At this meeting the accomplice, M. urges, passed the candidates in serious review, noting down carefully the physical characteristics of each, the amount of fortune, etc. In cases where this examination proved satisfactory the victim was invited to madame’s sumptuous apartments in sight or the Rond Point in the Champs Elysees, or some equally attractive quarter of the city. On every occasion the widow

but each time she told a pitiful tale of how she had been married against her will, and, while she would like to please herself on the present occasion, she still had a mother, her lather being dead, whose wishes she must consult, and who still deemed her, in spite of her previous matrimonial experience, “o’er young to marry yet.” In short the applicant must wait. Then began the most profitable portion of the game, the courtship being made as expensive as possible for the suitor. Nothing but the most costly presents would placate the imperious beauty, and if they fell off in the slightest from her high standard of quality and quantity, the dream of the infatuated admirer was promptly ended. Nor was this done in any disagreeable manner. There was no scene, no reproaches, no tears. 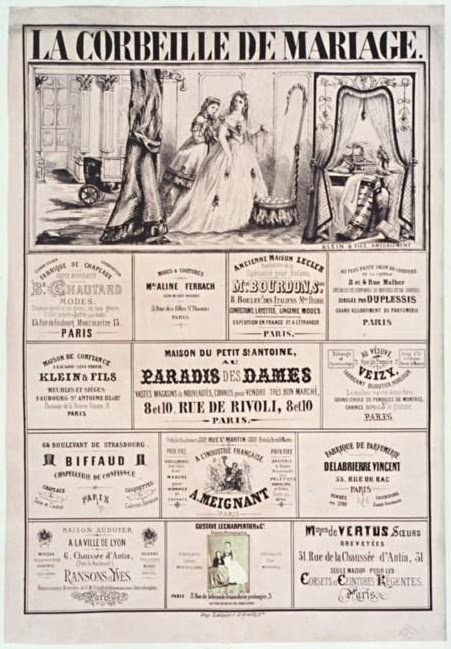 Madame simply disappeared. The profusely bled victim sought her in her accustomed haunts, but the most diligent search failed to reveal her. It goes without saying that the presents, constituting the magnificent “Corbeille,” [A tradition in 19th century France, the corbeille de mariage was a gift basket given by the groom to the bride upon the signing of the wedding contract] were also missing. The precious stones, rich jewels, and other valuable booty were not only invisible to the donor, but he would have been compelled to take ship in order to see them again. They had been safely transferred to the madame’s snug little mansion in the suburbs of London, which was rich from garret to cellar with the proceeds of her Parisian industry. But madame had yet another method. In cases where something more than the sedate joys of a French courtship were needed to induce the fiance to part with his means in sufficient abundance, Eveline kindly consented to an actual marriage, which piece of gracious condescension never failed to produce the desired effect. The “Make” and the church would be visited in due course, the wedding breakfast eaten, and the presents duly received and ticketed, but when the shades of night had fallen on the scene the groom, who mayhap had indulged too freely in Chambartin, would suddenly be

to the knowledge that both bride and gifts had departed. The French police declare on their honor that in 1881, when Eveline was brought to their official attention for the first time, she had been married in this peculiar way thirteen times, but that now she had increased the score to the extraordinary total of forty-three. The cause of the present unsought publicity given to Eveline and her ways is her experience with a certain viscount, which led to her arrest at the Hotel Meurice yesterday. This gentleman had ruined himself by gambling and was naturally anxious to obtain more wealth wherewith to regild his tarnished escutcheon. At first attracted by Eveline’s supposititious millions, he at length became really in love with the adventuress, and followed her and her companion with canine fidelity in their travels throughout England, Belgium and Norway, the expenses being paid by the nobleman, who borrowed right and left on notes of hand based on his expectations of marrying a wealthy widow. This, however, could not go on forever. The viscount insisted that the happy day should be named; Eveline, knowing that no more presents could be gained by an actual marriage, declined to do so, and her suitor laid his case before the police. Eveline was astonished at her arrest but is a woman of too many resources to be greatly cast down.