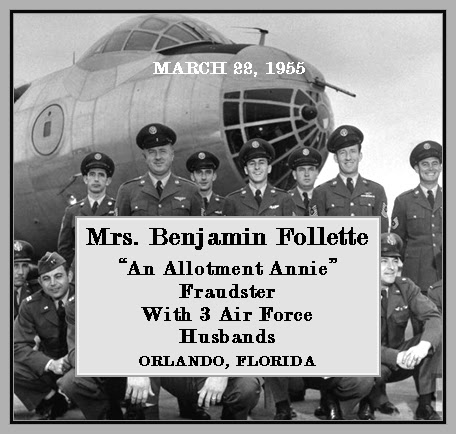 FULL TEXT: Orlando – A 24-year-old mother of three children was given five years of probation yesterday on her plea of guilty to receiving dependent allotment checks from three husbands.

The woman, Mrs. Benjamin Follette of Orlando, was brought here from State Prison at Raiford for arraignment on a charge of defrauding of federal government. At Raiford she is serving one year for bigamy.

Frank Muscarella, assistant U. S. district attorney, told Federal Judge William J. Barker she married John P. Rio in early 1953. Harold E. Richardson in May of that year, and Follette in their number.

The men were stationed in Pinecastle Air Force Base near here. Their present addresses are unknown.

Muscarella said the woman dropped the Rio allotment upon divorcing him in July 1953 but continued to collect from Richardson after marrying Follette.