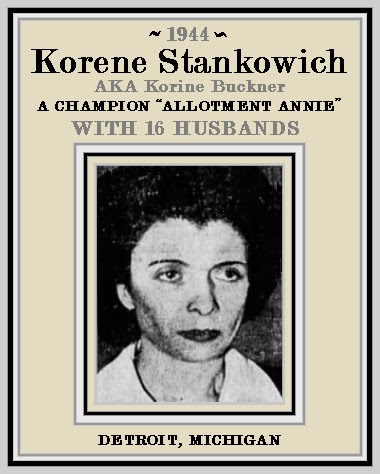 FULL TEXT (Article 1 of 2): From the looks of things, Mrs. Korene Stankowich, who at last count had accumulated at least 16 husbands, won’t be charged with bigamy.

To accuse a wife of bigamy there must be at least two complaining husbands.

Thus far, there seem to be no complaints.

Such husbands of the blithe redhead, who explained it all by saying that when a woman is very much alive there is no knowing what she will do, who did get peeved about the surplus of husbands are in no position to charge bigamy. Those few divorced her and, presto, they have no official standing.

The other husbands, some of whom met still other husbands under the guise of cousins, bother or plain dear friends, have made no attempt to get their mutual wife in trouble for being too enthusiastic about acquiring men.

In fact the low man on the totem pole, Pvt. Alexander Stankowich, of the Marines, No. 16, rushed out to round up bail money from her large circle of husbands until the Navy Shore Patrol interfered with with such enterprise by putting him in custody.

Julian G. McIntosh, chief assistant prosecutor, admitted Thursday there had been no complaints and that the FBI, which has interrupted Mrs. Stankowich’s marrying career bu putting her in jail for a surplus of pay allotments rather than husbands, had not consulted with the prosecutor’s office.

Some of her husbands are overseas and while he did not say it, McIntosh hinted that it might seriously hamper the successful prosecution of the war to start bringing them back. Both the Army and Marines, not to mention Mrs. Stankowich, have kept the husbands pretty well scattered and it might slow down action on all the fronts.

Uncle Sam is not concerned with her occupation but with the fact that she accumulated $1,500 from the military coup of her domestic entourage as allotment pay. As far as the FBI is concerned, only one of her husbands should have sent her money.

~ SHE STAYS IN JAIL.

Mrs. Stankowich still was in jail Thursday because her most recent mate was suppressed  before he could contact the rest of the family circle for her $4,000 bail.

The FBI also was holding her incommunicado since every time a reporter talked to her more husbands kept developing and it was feared it might become embarrassing to a large part of the general public. “You never know who might be another husband.”

FULL TEXT (Article 2 of 2): Because after 12 or more civilian husbands, Mrs. Korene Stankowich started marrying into the Army and Navy, she wound up in Federal Court here last week.

Never once was thre thirty-five-year-old redhead threatened with bigamy, although her record indicates she was opposed to divorce, but trouble hove up because she was getting pay allotments, according to the FBI, from three soldiers and a Marine.

It wasn’t until after she was brought into Federal Court that Mrs. Stankowich revealed her nonstop marriage record which pales anything covered before.  In fact, she had considerable trouble recalling husbands. Uncle Sam recalled her recent four, all military men and accused her of getting a tidy $2,500 from the Government in allotments. However, Pvt. Alexander Stankowich, of the Marines, Husband No. 16, was undiscouraged and rushed ourt to round up $4,000 bail from her circle of husbands until a Navy shore patrol stepped in and stopped him.

Mrs. Stankowich evidently sharpened up her technique on the civilians for records show that five years ago she was careening around New York pretending to be one of the famous Couzens’ family, of Detroit. None of her husbands – most are now overseas – have come forward to charge her with bigamy but one civilian, who shucked her legally in bygone years, revealed that she used the heiress gag on him. 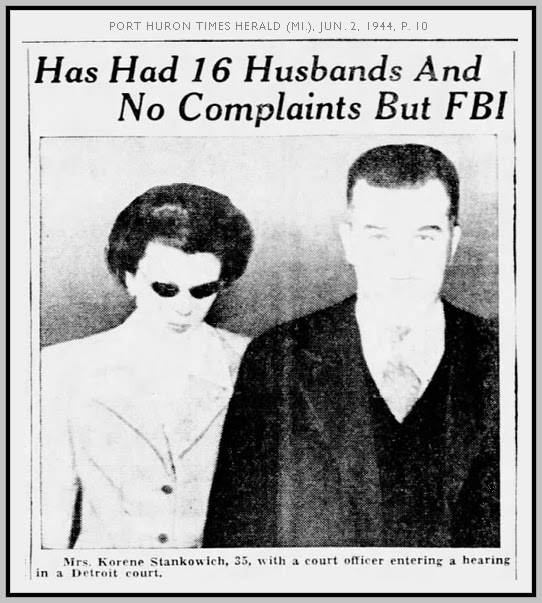 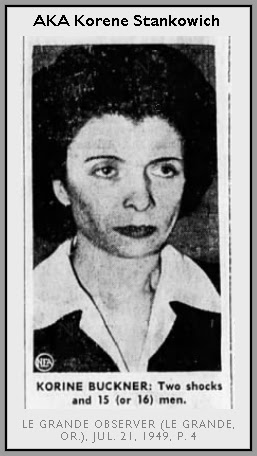