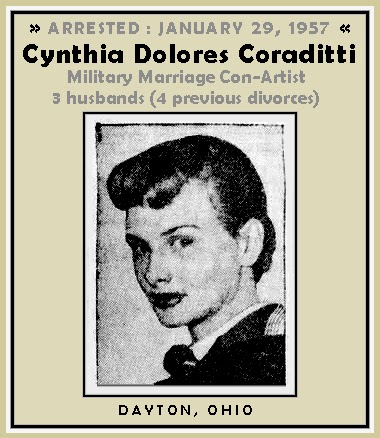 FULL TEXT (Article 1 of 3): Dayton, Jan. 30 – An attractive 23-year-old pregnant blonde who left a trail of seven husbands but divorced only four, today told police “it was hard to find a guy could trust.”

Det. Sgt. J. H. Pickard said Mrs. Cynthia Dolores Coraditti was arrested Tuesday [Jan. 29] after a dispute between husbands No. 6 and No. 7.

She is being held on suspicion of bigamy and defrauding the government.

“What are you doing here with my wife?” Fultz demanded. Morris replied, “this is my wife.” The three then decided to take the mixup to police to straighten out.

Pickard said the last two marriages are bigamist marriages. He also said Mrs. Coraditti received an allotment check from Fultz while he was in the Navy in 1955.

Mrs. Coraditti is now legally married to Benny Coraditti, 27. She married him in Folkston, Ga., in 1953, the detective said, and she received allotment checks from a Florida Air Force Base.

The woman said she married four times between the ages of 13 and 18 and was “looking for a guy who would stand by me regardless of my past.”

FULL TEXT (Article 2 of 3): Dayton, Ohio – A 23-year-old manicurist, who told police she is still married to three of her seven husbands, is in jail here, charged with suspicion of defrauding the government.

“Now that I am expecting a baby, everything has fallen apart. No one seems to want me.”

She said: “I was looking for a guy who would stand by me regardless of my past. It was hard to find a guy I could trust.”

Her first marriage goes back 10 years, she told a reporter.

In all, she said, she was married three times between the ages of 13 and 18.

Mrs. Coraditti entered police headquarters here yesterday with two husbands, Eugene Fultz, 24, and Raymond Morris, 22. They were arguing about who her real husband was. It was then that she related the story of her seven marriages and four divorces.

She said she divorced her first four husbands because they went out with other women.

Detective Sgt. J. H. Pickard said Mrs. Coraditti was charged with defrauding the government after she admitted collecting government allotment checks from a husband in the Navy and another in the Air Force.

FULL TEXT (Article 3 of 3): Richmond, Ind. – A much-married blonde, who failed to divorce three of her seven husbands, began serving a 90-day term for bigamy today at Indiana women’s prison.

But Brubaker was not swayed by her tears. “You are not a bad woman,” he said, “but you flouted the law and knew you were doing it.”

Meanwhile, her sixth husband, Eugene Fultz, 24, Dayton, Ohio, said he planned to file for an annulment. But Mrs. Cardatelli said one of her husbands, whom she declined to identify, had promised to care for her unborn child after she leaves prison. She said they will journey to Arizona. 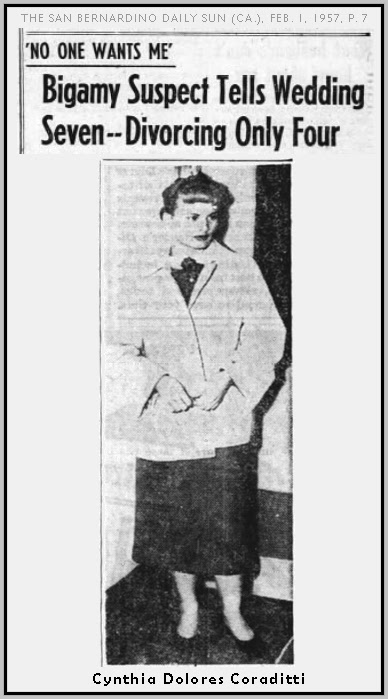