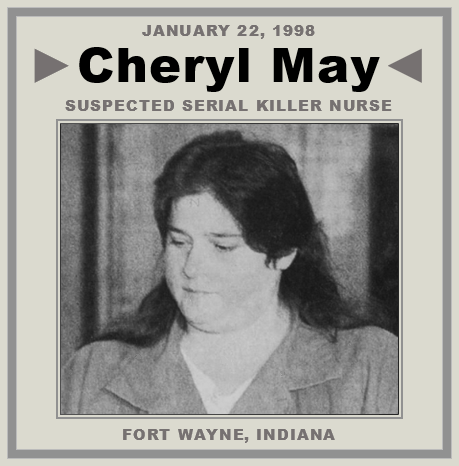 TRAGEDY: A patient’s death, which police have said was caused by registered nurse giving him a lethal narcotic, led authorities to exhume five other bodies.

FORT WAYNE, Ind. - A coroner said Tuesday that four deaths at a Fort Wayne nursing home were homicides after ruling that three more patients were given a lethal dosage of drugs.

Cheryl May, a former registered nurse at the Courtland Health and Rehabilitation Center, has been charged with murder in the death of Philip Harmon, 69, last Aug. 17. She has been held without bond in the Allen County Jail since her arrest Jan. 22.

May also was an employee of the nursing home when the three other patients died, but Allen County Coroner Phillip E. O'Shaughnessy did not say whether she provided care to any of them.

Harmon's death, which police have said was caused by May giving him a lethal dose of a morphine-based narcotic, led authorities to exhume the bodies of five other people who died at Courtland while May worked there.

O'Shaughnessy said autopsies and toxicological studies have revealed lethal drug doses in three of the bodies. The coroner said tests are being performed on the remaining two bodies that were exhumed. No further exhumations are scheduled, he said.

O'Shaughnessy said all test results have been turned over to police and the prosecutor's office.

O'Shaughnessy would not comment on the type of drug found in the remains of the three victims, or on whether it had been prescribed for them. The five bodies were exhumed, he said, because authorities had evidence indicating foul play might have been responsible for their deaths.

FULL TEXT: Fort Wayne – A former nurse who admitted responsibility in a patient’s death might serve less than a year of home detention after being handed a 4-year sentence for criminal recklessness.

Cheryl A. May, 33, was first charged with murder, which carries a sentence of 45 to 65 years, in the 1997 death of Phillip J. Harmon, 69. But she pleaded guilty last month to criminal recklessness and was sentenced Thursday to 4 years in prison.

With credit for time already served and good behavior, she will likely sere only about 9 months even though she faced up to 8 years on the criminal recklessness charge. A hearing will be held April 30 to determine whether May is eligible to serve the remainder of her sentence on home detention.

May admitted administering lethal dose of morphine to Harmony at the Courtland Health and Rehabilitation Center in excess of a physician’s recommendation. 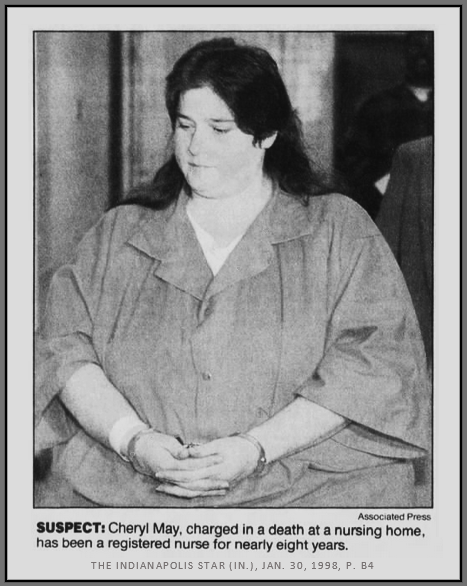 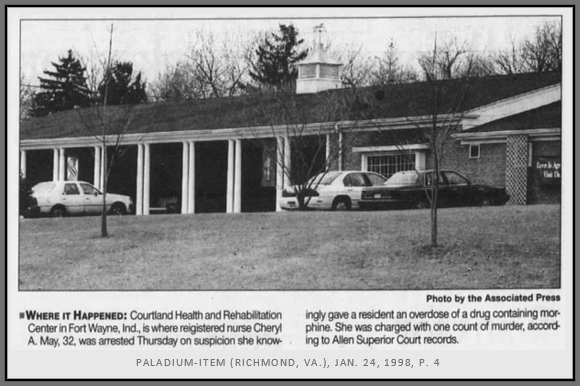