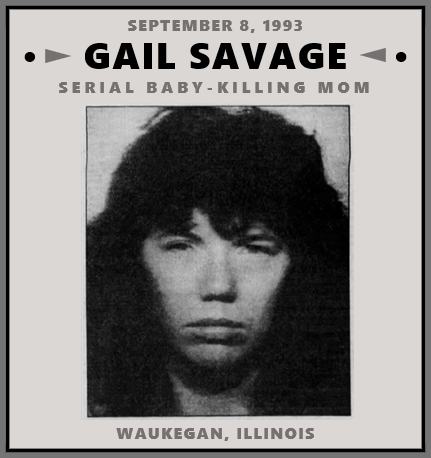 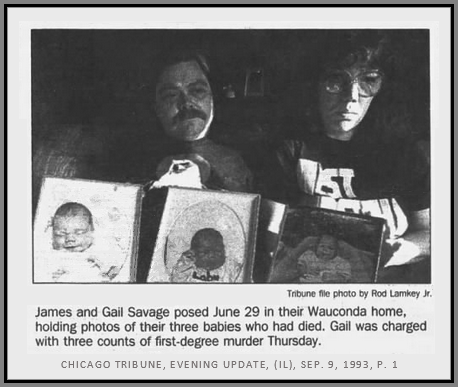 Shortly after their first child died in November 1990, James Savage arrived home from work to find his wife huddled on the floor of her bedroom closet.

She wouldn't come out and refused to speak to her husband or anyone else, family members recall. Instead, Gail Savage, a woman described as shy and reclusive, sat alone in the dark. In one hand, she clutched her purse; in the other, the blue blanket that had belonged to her son, Michael.

At the time, it seemed little more than an expression of grief. But authorities now say the blanket Savage held may have been a murder weapon, one used to smother the 6-week-old boy.

The 30-year-old part-time secretary from Wauconda has admitted to the slaying, police say, telling authorities how she similarly killed two daughters who were born in the two years following Michael's death.

Her confession ended months of speculation on the part of authorities, who were skeptical of Savage's claims that her children had died of Sudden Infant Death Syndrome, commonly known as crib death.
But it did little to resolve the confusion of relatives and friends, who said Savage desired nothing more from life than a husband and children.

"They were the happiest, proudest people I've ever seen," said Sharon Reynhout, owner of a Wauconda flower shop. She met the Savages after Michael's death and arranged flowers for the funerals of their daughters, Amber and Cynthia.

But Reynhout said the couple often returned to the shop after Michael's death, to show off Gail's swollen belly when she was pregnant with Amber and to preen with Cynthia in late June of this year.
"Gail was holding the baby. He was holding a bag of groceries," Reynhout said. "They must have talked to me for half an hour. They were just so happy."

"It's hard to accept the possibility that this happened," Reynhout said.

Many of those who know Gail Savage are unable to reconcile the conflicting images that have emerged: the doting mother who fussed over her children and was often seen walking hand in hand with her husband, and the woman accused of murder.

Gail Savage's family refused to comment. Many who shared classes or jobs with her as she grew up in Wauconda remember little more than her name and the thick set of glasses she wore to compensate for having only one functional eye.

Several teachers at Wauconda High School, where Gail graduated in 1981, couldn't remember her days there.

"She was a very sensitive girl," said Nedra Swanson, director of food services at Town Hall Estates Nursing Home in Wauconda, where Gail worked for eight years as a dishwasher.

"If somebody said something nasty, some people would brush it off, but she would take it to heart," Swanson said.

Like most teenagers, she spent time with friends bicycling, going to movies and talking about boys. It was during these conversations, friends remember, that Gail made self-deprecating remarks about her looks and that she revealed her despair that they might prevent her from finding a boyfriend, let alone a husband.

It was through her sister that Gail finally found a companion. His name was James Savage, a divorced carpenter who was six years older and whose brother was dating Gail's sister, Lori.

The couple appeared at a Christmas party in Crystal Lake four years ago, with Gail radiant in a green dress, according to co-workers. They were married a few months later.

When their son, Michael, was born in the fall of 1990, it seemed as though the doubts of her youth had been transformed into a family.

"This was her dream, to get married and have a family," said Rev. Christopher Barnes, the pastor of the Evangelical Free Church of Wauconda. "And this was the long-awaited son."

By all accounts, the six weeks that constituted Michael's life were uneventful but for the constant attention the Savages devoted to their son. James Savage's mother, Christine, recalled how her son and daughter-in-law split the chores of parenthood, from feeding to changing the diapers.

"I've always been in awe of the relationship she and her husband had," said Kris Dawson, 28, a neighbor and friend. "I've often seen them holding hands just walking from the car to the grocery store."

Yet the personal dream that Gail Savage had long sought was fleeting, lasting only until she made a call to her mother some six weeks after Michael's birth.

Gail said the baby was dead in his crib. Her mother called 911.

The coroner listed the death as SIDS, one of 11 such deaths in Lake County that year. The boy showed no signs of illness or injury.

Michael's death and funeral were followed by weeks of depression for Gail Savage, Christine Savage said, during which the closet incident occurred and which culminated in an alleged suicide attempt in December 1990.

Again paramedics were called to the Savage home, this time finding Gail unconscious on her bed after apparently taking an overdose of medication prescribed for epilepsy, investigators have said.
Following her recovery, she was admitted for psychiatric treatment at Good Shepherd Hospital in Barrington, where she spent four days before being released, Rev. Barnes said.

Upon returning to her home and family, all appeared to return to normal for the Savages. And soon Gail was pregnant again.

Just as she had done with her son after his birth, Amber's mother toted her from place to place, showing her off at work and to her friends at the flower shop and her former co-workers at the nursing home.
Then, just 22 days after her birth, Gail phoned paramedics and said she had found Amber dead in her crib. There were no signs of illness or injury. The Savages said it was SIDS. The Lake County coroner listed the cause of death as "undetermined."

The toll of losing two children had worn on James Savage, who said he recalled that the couple wrestled with the decision of whether to try again to build a family. They attended seminars on SIDS and on coping with the death of a child.

Eventually, they decided that the odds were in their favor.

The first couple of months were filled with tension, friends recalled, and Cynthia spent her days hooked to a special monitor equipped with an alarm that would sound if the child stopped breathing.

But by late spring, Cynthia was trying to sit up, and the Savages were telling friends that the child was in the clear. They even asked Lake County Coroner Barbara Richardson if they could remove Cynthia from her monitor, which they eventually did against Richardson's advice.

As the weather warmed, the Savages were often seen touring their neighborhood behind Cynthia's carriage.

"I saw the baby at the grocery store," said Kristi Perciach, a former co-worker. "She was buying baby food, and the baby looked healthy. It was on her five-month birthday."

Around noon two days later, Gail Savage called Wauconda paramedics to report that Cynthia was dead in her crib. There were no signs of illness or injury. The Savages said it was SIDS.

On Thursday, Richardson listed the cause of death: suffocation.

"It's hard to believe Gail killed the kids," Perciach said. "She doesn't seem violent. Lonely, but not violent. But it's like you know someone and you don't know them at all." 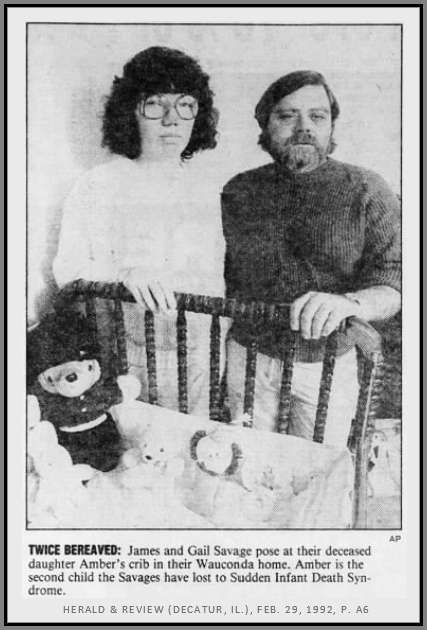 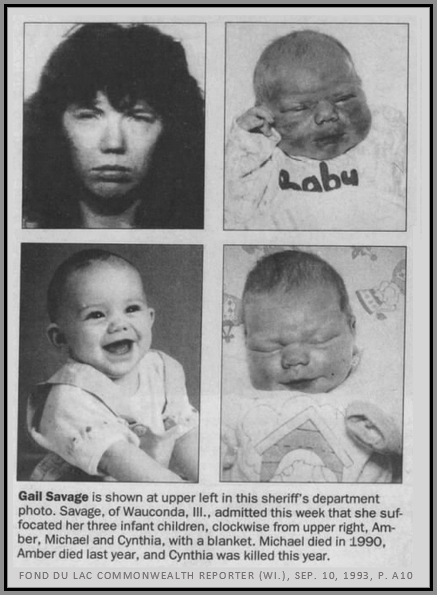