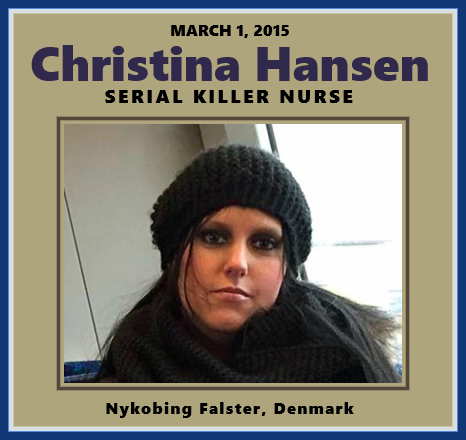 While the four deaths noted in prosecution took place on only two separate dates, the case seems to be appropriately classified as a serial killer case, based on the following: “The court heard more than 70 witnesses, several of which said they had suspected Hansen of trying to harm patients long before she was detained in March last year and that they believed she had done so in search of drama and attention.”

Wikipedia: Christina Aistrup Hansen (born 1984) is a former Danish nurse who was charged with the murder of three patients and attempted manslaughter at the Nykøbing Falster Hospital.

In June 2016, the nurse was sentenced for three murders and attempted murder, according to section 237 of the Danish Penal Code.  In addition, she was deprived of her authorization as a nurse. The court in Nykøbing found it proven that Hansen had given her sick and weak patients lethal doses of morphine and diazepam. The trial in the city court extended over 27 days and involved more than 70 witnesses. At the time of the judgment, the nurse appealed to the national court for a declaration of dismissal.

In May 2017, she was convicted of a single jury trial by the Østre Landsret for three murders and was instead found guilty of attempted manslaughter in four cases. On this basis, the court changed Hansen's punishment from life to 12 years in prison. The reason for the change was, in particular, a forensic and evidence-specific detail: although it was found that Hansen's medical abuse on patients did not occur “in treatment or pain relievers by mistake,” the technical evidence was not strong enough to confirm the verdict. The Legal Service Council reviewed the medical information and concluded that it was not possible to be fully sure that the morphine and diazepam injections were the direct causes of death.

In addition to these charges, Hansen was found guilty of giving her own 7-year-old daughter strong and prescribed sleeping medicine that is dangerous for children and only suitable for adults.

In a legal psychiatric personality survey, it was determined that Hansen suffered from a histrionic personality disorder. When you suffer from a histrionic personality disorder - what was previously called a 'hysterical neurosis' - you have a pressing urge to be at the heart of dramatic events. Many manipulate, both with their feelings and sexuality, for the purpose of obtaining recognition from others. A person suffering from this disorder is capable of going to extreme lengths for positive attention. All this and violent self-absorption, which includes narcissism, often makes the person conduct acts towards others so they can be in the center of attention.

The nurse's personality disorder was seen by the prosecution as one of the main motives behind the killings. Prosecutor Michael Boelsen stated to the court that "the defendant has arranged herself as the main role character in a bizarre play where the patients are her extras". Although she was described as proficient, the psychiatric report showed that the she had average intelligence. Boelsen stated in this context that "she [Hansen] has used her professional insight in a deeply perverted way, which was driven by her histrionic personality disorder".

A DANISH NURSE, dubbed a “devil of death” by prosecutors, was sentenced to life in prison for murdering three patients and trying to kill a fourth.

Christina Hansen, 31, was found guilty of administering overdoses of morphine and the sedative diazepam to three elderly patients at a hospital in the southern town of Nykobing Falster between 2012 and 2015.

A fourth patient, who survived, was also found to have traces of the substances in her blood.

Her life sentence was handed down in Nykobing Falster district court yesterday. Under Danish law, a parole hearing is allowed after 12 years.

The Nykobing Falster district court found that the patients had been given, among other things “morphine in lethal doses, and that the perpetrator was the nurse,” a statement said.

“The accused was not an angel of death. She was a devil of death,” prosecutor Michael Boolsen said while calling for her to get a life sentence.

Lawyer Jorgen Lange appealed the verdict, telling Danish media the court’s decision was “shocking” given that some of the patients had been terminally ill.

The court heard more than 70 witnesses, several of which said they had suspected Hansen of trying to harm patients long before she was detained in March last year and that they believed she had done so in search of drama and attention.

A psychological evaluation found that the nurse was not mentally ill but that she suffered from a personality disorder characterized by “egocentricity” and a “persistent quest for excitement.”

FULL TEXT: On May 17, 2017, an unanimous statement in the 11th District Court found a nurse guilty of attempted manslaughter of four patients at Nykøbing Falster Hospital.

The defendant was found guilty by an unanimous remand at the court in Nykøbing Falster of i.a. three killings and one attempted murder of patients, and defendants were sentenced to life imprisonment.

The High Court has, to a very large extent, upheld the district court's evidence and the rationale for this, including that the defendants have filed the patients in question morphine and Stesolid (diazepam) and that this has not been done in a treatment or pain relief or in error. The case has been submitted to the National Court of Appeal for the national court. According to the Declaration of the Medical Council, the cause of death of the three deceased patients cannot be considered unambiguously clear. After a comprehensive assessment of the medical information and the evidence, the High Court did not find sufficient evidence to establish that the three deceased patients had died as a result of the defendant's administration of morphine and diazepam, but that the defendant's submitted amount of morphine in in any case, may have been a contributing cause of death. The defendant is therefore acquitted of manslaughter under section 237 of the Criminal Code in relation to these three patients.

The County Court has also upheld the district court's order on the guilt issue, including as regards a further case of attempted manslaughter of a patient.

The High Court must then decide in particular on the sentencing. Judgment is expected in the case on May 18, 2017.

The case is being dealt with in the 11th District Court under case number S-1867-16.