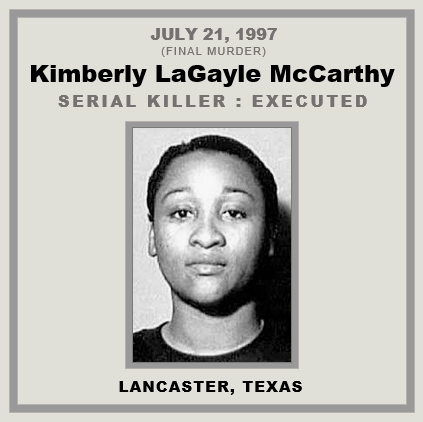 Wikipedia: Kimberly LaGayle McCarthy (May 11, 1961 – June 26, 2013) was a death row inmate who was convicted and sentenced to death for the 1997 murder of her neighbor, 71-year-old retired college professor Dorothy Booth, in her Lancaster, Texas (Dallas–Fort Worth area) home during a robbery. She was also a suspect in the murders of two other elderly Texas women, for which she was never tried.

After her final federal appeal was denied in July 2012, her execution date was set for January 29, 2013. Two reprieves pushed her execution date to June 26, 2013. McCarthy continued to proclaim her innocence, and stated that she was framed for murder.

McCarthy was born on May 11, 1961, in Greenville, Texas. She worked as an occupational therapist in a nursing home. She was briefly married to Aaron Michaels, with whom she had one son. During her adult life, she developed an addiction to crack cocaine. In 1990, she was convicted of forgery, and also had convictions for prostitution and theft of services.

On July 21, 1997, McCarthy reportedly called her neighbor, former El Centro College psychology  Dorothy Booth (May 14, 1926 - July 21, 1997), saying that she was on her way over to borrow some sugar. Prosecutors later alleged that McCarthy's true intent was to rob Booth. After McCarthy arrived at Booth's home, she stabbed Booth five times with a butcher knife, beat her with a candelabrum, and cut off her finger to steal her diamond wedding ring. McCarthy then stole Booth's purse and Mercedes-Benz and pawned the diamond ring in order to buy crack cocaine.

The day after Booth's murder, McCarthy was charged with murder. Evidence showed that McCarthy used Booth's credit cards at a liquor store and was in possession of Booth's driver's license. Booth's DNA was also found on the murder weapon, which police recovered from McCarthy's home.

In 1998, McCarthy was convicted by a Dallas County, Texas jury of murdering Booth. During the sentencing hearing, prosecutors presented blood DNA evidence alleging that McCarthy also murdered two other elderly women in Dallas County in December 1988, 81-year-old Maggie Harding and 85-year-old Jettie Lucas, in order to purchase cocaine. McCarthy was never charged with those murders. On November 24, 1998, McCarthy was sentenced to die by lethal injection for killing Booth.

McCarthy successfully appealed her conviction in 2002, but was later re-tried and re-sentenced to death on November 1, 2002.

McCarthy's final federal appeal was denied in July 2012. Her attorneys sent a writ of certiorari to the United States Supreme Court, and it was denied in January 2013. Her execution date was initially set for January 29, 2013. Only hours before her lethal injection was scheduled to occur, she was granted a stay of execution. Her execution was next set for April 3, 2013, but in late March, the Dallas County district attorney announced that the date had been moved to June 26, 2013.

McCarthy was executed by lethal injection at the Huntsville Unit in Huntsville, Texas, on June 26, 2013. Her execution marked the 500th convicted killer to be executed by lethal injection in Texas (which averages one execution about every four weeks) since the death penalty resumed in the United States in 1976. She was 52 years old. She was pronounced dead at 6:37 p.m. CDT, 20 minutes after Texas prison officials began administering a single lethal dose of pentobarbital.

McCarthy’s last words were "This is not a loss. This is a win. You know where I'm going. I'm going home to be with Jesus. Keep the faith. I love you all."

She was the first woman executed in the United States in almost three years. 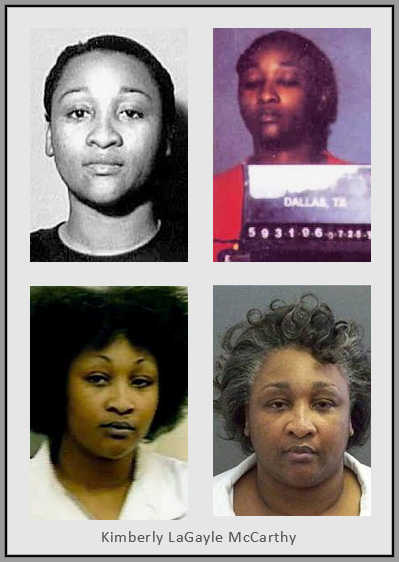