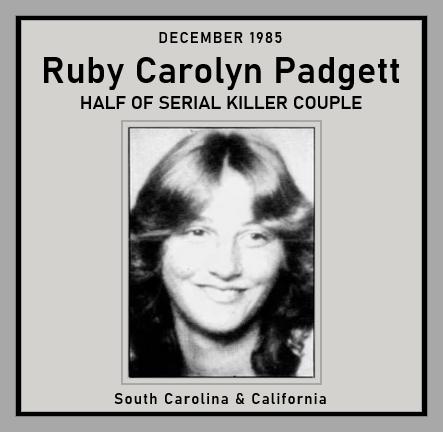 Mitchell Sims and Ruby Carolyn Padgett, both from West Columbia, South Carolina, declared war on Sims’ former employer, Domino’s Pizza, where Sims had been a manager, in December 1985. Their violence spanned the entire continental United States – from South Carolina to California.

The lovers’ first homicidal exploit occurred at the Domino’s in Hanahan, South Carolina, where in May 1985 Mitchell Sims had quit his job as manager and stormed out.  He bought a gun and then threatened to blow up the pizzeria in order to avenge what he felt was unfair treatment by his boss and co-workers. [LA Times, May 7, 1987]

On December 3 the couple visited the Domino’s where Sims had worked and “tied up his coworker, Chris Zerr, and shot him in the head. Sims also tied up manager Gary Melke and shot him four times in the head and neck. Melke managed to free his hands and, bleeding profusely from his wounds, walked three blocks to the local police station. After spitting broken teeth and bone fragments out of his mouth, Melke told paramedic, George Pledger, that his coworker Mitch Sims shot him. When Pledger assured Melke they would get him to the hospital and save his life, Melke said, “I feel like I’m going to die.” Melke did die following surgery. Zerr was found dead in a pool of blood on the floor of the Domino’s next to the emptied safe.” [Michele Hanisee, “Death Penalty Exhausted Appeals – Part 1”]

John Harrigan, 21, was delivering a Domino's pizza to a Glendale motel room shortly before midnight, when Padgett and Sims robbed and choked him then drowned him in a bathtub. The next morning the body was found by police -- gagged body submerged in the overflowing motel bathtub. A washcloth had been stuffed in his mouth and a pillow case was tied over his head.

The couple then drove to the Domino’s the delivery man had come from. The robbed the safe and Sims “hanged Spiroff and Sicam in the cooler in a manner that promised a slow, agonizing, and painful death.” They were, however, found alive, but were tied to metal hooks in a darkened food freezer in such a manner that they had to stand on their toes to avoid strangulation.

Sims and Ms. Padgett were arrested early Christmas Day at a small North Las Vegas motel, where they had been registered since Dec. 11 under assumed names. The arrest followed a tip from an unidentified person who recognized them from news photos, police said.

At the extradition hearing, both Sims and Ms. Padgett smiled frequently, with Sims mouthing the words ″Hi, mom″ in the direction of a television camera as he entered the courtroom. At the end of the hearing, Sims leaned over and told Ms. Padgett: ″See you, babe. I love you.″

Throughout her seven-week trial, Padgett insisted that she was just an unwilling observer of the crimes committed by Sims. On a February 26, 1987 – Pasadena, Ca., jury found Ruby Padgett, 21, guilty of one count of first-degree murder and three counts of armed robbery but acquitted her of two counts of attempted murder. Pasadena, California.

Sims was sentenced to death.

Padgett remains in prison. A petiton in support of her release has been posted online.


Dec. 9, 1985 – John Steven Harrigan (21), murdered; Domino’s Pizza, Glendale, Ca. Kory Spiroff and Edmund Sicam, were found alive, but were tied to metal hooks in a darkened food freezer in such a manner that they had to stand on their toes to avoid strangulation, Green said. $2,000 stolen from Domino’s.
Dec. 25, 1985 – arrested, Las Vegas, Nv.
Feb. 26, 1987 – Ruby Padgett, 21, guilty of one count of first-degree murder and three counts of armed robbery but acquitted her of two counts of attempted murder. Pasadena, California. 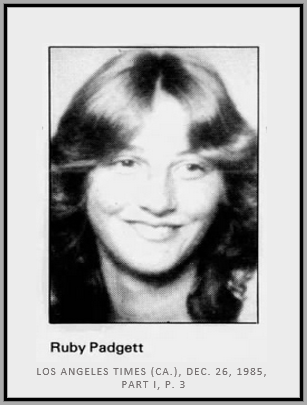 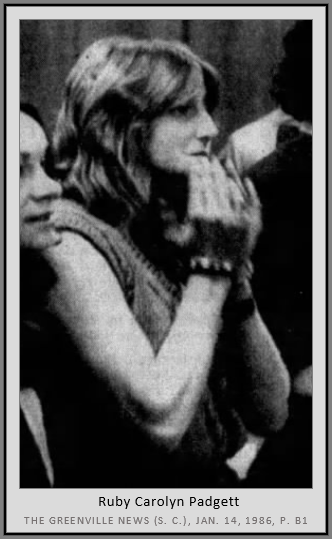 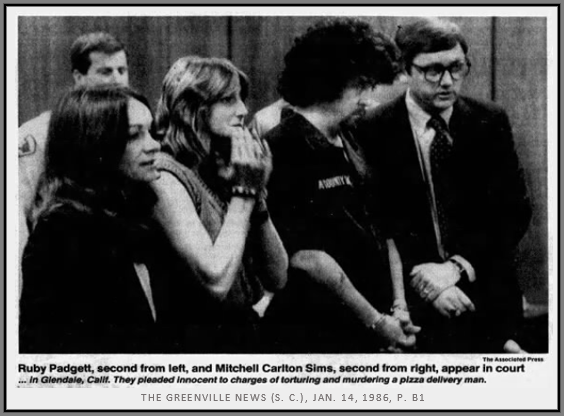 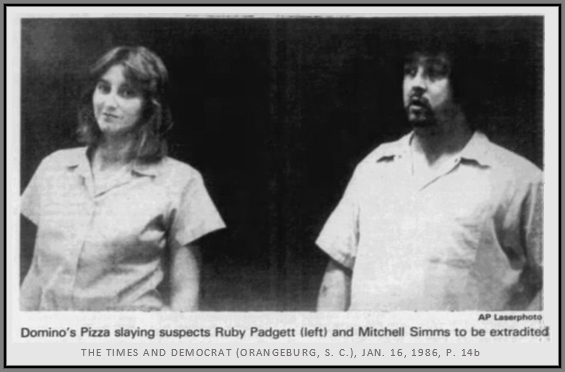 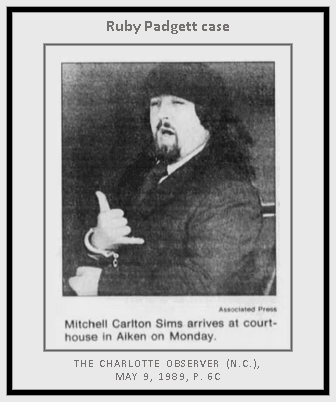 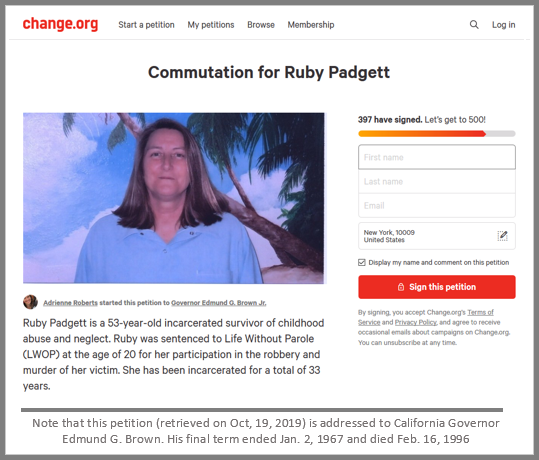