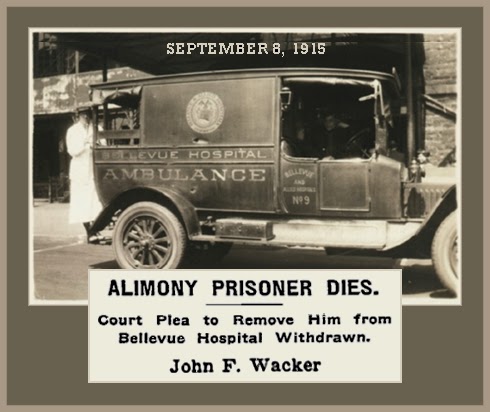 FULL TEXT: The application made to Justice [James] Donnelly of the Supreme Court on Friday to order the removal of John F. Wacker from the prisoner’s ward at Bellevue Hospital was withdrawn yesterday because Wacker died on Monday. Wacker, who was a dealer in jeweler’s tools at 21 John Street, had been committed to Ludlow Street Jail three months ago for failing to pay $1,000 back alimony. He was determined not to pay, it being a matter of principle with him that when a woman could not live with her husband she should not expect him to support her.

Six months in jail would have freed Wacker from liability, and he was received to serve this term. In jail he grew ill of cirrhosis of the liver. A week ago yesterday he was taken to Bellevue. Otto A. Glassberg, Wacker’s attorney, told Justice Donnelly that Wacker lay in a ward that was so noisy his client could not sleep, and that he was surrounded by drug users and alcoholics who made an inferno of the place. Mr. Glassberg wanted Wacker taken to St. Vincent’s or some other quiet hospital.

Counsel for Mrs. Wacker opposed the motion and intimated that the purpose of it was to enable Wacker to escape paying the money he owed his wife. Wacker’s son Emil made an affiodavit that when he saw his father recently the latter appeared to be in good health. Mrs. Wacker’s attorney asserted that Wacker had promised to give his wife $1,000 if she would divorce him. Mr. Glassberg reported that unless his client was removed quickly from the prison ward in Bellevue he would die. Justice Donnelly reserved decision.

The parties intermarried in Germany in 1886, where they continued to reside until some time in 1891, when, according to the allegations of the complaint, the defendant, wrongfully and without just cause or provocation, abandoned the plaintiff, and has since refused to support or live with her. Shortly after the abandonment, the defendant came to the state of New York, where he has since resided. The action was commenced by the service of a summons on the defendant on the 31st of May, 1912, and the plaintiff was not then within the state of New York, nor had she ever been in the United States. Subsequently she left Germany, and reached New York about the 20th of June, 1912; the defendant in the meantime having temporarily left New York for Germany, where he was when she arrived. He did not appear in the action, but his default was subsequently opened, and he was permitted to come in and defend. During his default the plaintiff obtained, ex parte, an order awarding her $10 a week alimony and $500 counsel fee, and also an order appointing a receiver of defendant's property in sequestration proceedings. After defendant had appeared in the action, he moved, upon notice, to vacate the order awarding alimony and counsel fee and appointing the receiver. The motion was denied, and he appeals, urging that both orders are erroneous, since the court did not have jurisdiction of the subject-matter of the action. [p. 79, Justice McLaughlin]