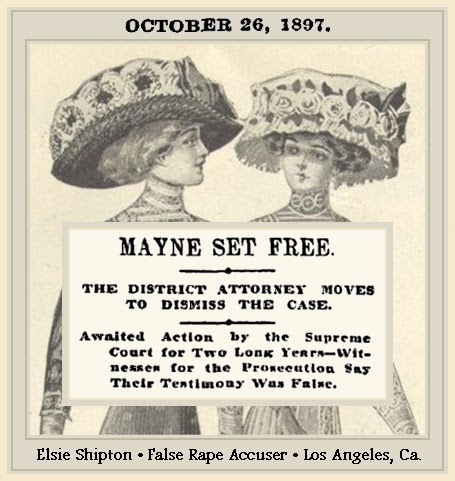 FULL TEXT: After two years’ confinement in the County Jail, awaiting the action of the Supreme Court, Clifton E. Mayne, charged with having committed rape upon the person of Elsie Shipton, is now a free man, the District Attorney having moved to dismiss the case in Department One yesterday.

Mayne was convicted in 1895 upon evidence which appears to have been perjured, for the most part. The trial was sensational in every particular, made specifically so from the fact that Mayne had been prominent in State politics, and was credited with having succeeded in “putting through” the Board of Supervisors of San Francisco some of the slickest jobs known to local history in that city.

In his capacity of a political manipulator. Mayne became mixed up with Boss Buckley, to whose influence, personally and financially, he attributes much of the force developed by the prosecution in his case. Mayne, it appears, had an idea or two of his own concerning political maneuvers, and soon graduated from the position of under study to the powers of the Bay Buckley and Mayne became at outs; the former had a little deal in San Diego in connection with the control of the city water supply; Mayne decided to checkmate him, and did so.

Shortly after, Mayne adopted Della Shipton and brought her to this city, accompanied by her sister Elsie. Then the charge of rape was preferred and Mayne was arrested, thrown into jail, and subsequently tried and convicted. At the trial Elsie swore positively that Mayne had had criminal relations with her, and Della, the defendant’s daughter by adoption, corroborated her statement.

Immediately after his conviction, Mayne appealed to the Supreme Court, including among the formal papers several affidavits of witnesses who swore that their testimony at the trial had been given under pressure brought to bear by friends and relatives. Among these was Della Shipton, who made the following statement:

“First – All the testimony I gave at the trial of C. E. Mayne was false. I was forced by threats to say what I did. C. E. Mayne was not in bed with me and Elsie,” as testified to by me.