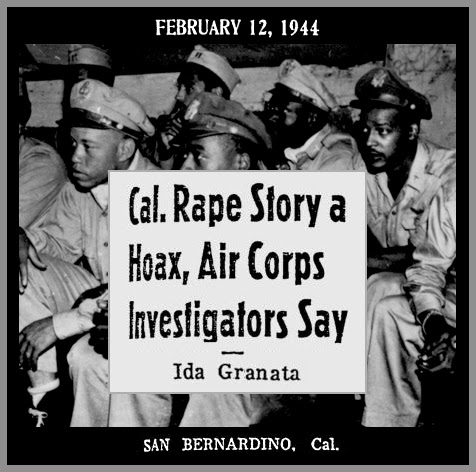 FULL TEXT: San Bernardino, Cal. – Army Air Corps investigators possibly averted a bloody racial clash here when they proved untrue a white girl’s story that she had been raped and slashed about the face by a colored man last week.

The girl, who is said to be Ida Granata, of Rochester, N. Y., is a resident of the women’s dormitory project, which provides living accommodations for civilian employees of the army air depot.

“Since the woman perpetrated a hoax against the army which has jurisdiction over the dormitories, it is considered proper to inform residents of this fact,” said Maj. Bert C. Brown, of the San Bernardino Army Air Force. “The attack never occurred and the army considers the incident closed.”

The rape report directly involved all colored men who reside in a civilian dormitory project nearby on East Third Street. Officers are said to have told a group of suspects after several days’ search. “The girl cut herself with a piece of lass from a radio dial and staged the act of having been raped and assaulted by a colored man.”