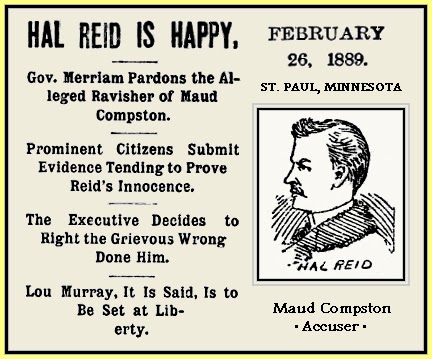 FULL TEXT: Hal Reid is a free man! The alleged ravisher of Maud Compston was yesterday, ranted a free pardon by Gov. Merriam. Convicted by the trial court, the conviction being upheld by the appellate court, as a last resort an appeal was made to the chief officer of the state for an absolute pardon. These papers were originally filed with Gov. McGill, who left them as a legacy for his successor. Gov. Merriam has given considerable thought to the case, and in the legal points has had the matured opinion of Attorney General Clapp. Two eminently reputable citizens of the state made affidavits placing an entirely new feature in this notorious case, and adduced evidence which did not come out at the trial, which greatly favored the position taken by Reid in this matter. These affidavits were amply substantiated by others, and in the interests of justice, Gov. Merriam says, he could see no other was than grant the accused an unconditional pardon.

Hal Reid’s pardon arrived at the state prison at 1:30 o’clock yesterday, after he had served thirteen months of a fifteen years’ sentence on conviction of rape. His father, in expectation of to-day’s action of Gov. Merriam, had come over from Minneapolis in the morning, and when the Globe reporter called at the warden’s office, so in after 1 o’clock, the doctor was anxiously, yet lightly, pacing, the floor, his eyes continually turning to the. clock and toward the space in front of the office. He was waiting for the 1:25 Duluth train from St. Paul, on which, if no hitch occurred, Hal’s sister, Mrs. Levering, would come from the, capital, bearing the precious document. The train was a “little ahead of time, and Dr. Reid was still in the office, so that when the conductor stopped in front of the prison Mrs. Levering alighted alone, and with the pardon conspicuous in her hand, hurried across to the prison and entered the office, her face deathly pale, and her form trembling with excitement. “I have it. It is here,” she exclaimed, and in a moment the father and sister passed within to meet the prisoner to whom such good tidings had come. In scarcely fifteen minutes they reappeared accompanied by Hal, faultlessly dressed in black pants and vest, and an imposing Prince Albert. He, too, was very pale and agitated, but said to the Globe reporter: “I have expected it, because knew justice must be done. If it had been done earlier I would not have been here five minutes. He hastily seized the pardon and read it, saying: “It is a complete vindication. That is right.” The document recites, that the governor’s action is based on application for pardon filed by W. D. Washburn, Charles A. Pillsbury, S. P. Snider, Anthony Kelly and. many other prominent citizens of the state, supplemented by. affidavits now on file in my office showing that Maud Compston, the complaining witness, had made statements and admissions seriously impeaching her testimony given at the trial, and whereby I am convinced that great injustice has been done said J. H Reid, and that he is not guilty of the crime of which he was convicted. The outgoing 4:20 train stopped at the prison for the Reids, they especially wishing to avoid trip down town, where news of the pardon had spread.

Hal Reid was arrested on : the morning of Sept. 9, 1887, and confined in the county jail until the 2lst, when he was bailed out by. his father. Dec. 3 of the same year lie was convicted and again confined in the comity jail until the 11th of January, 1888, when he was conveyed to the state prison at Stillwater. So he has served fifteen months upon the sentence of fifteen years for the conviction or the crime of which he declares he is innocent.