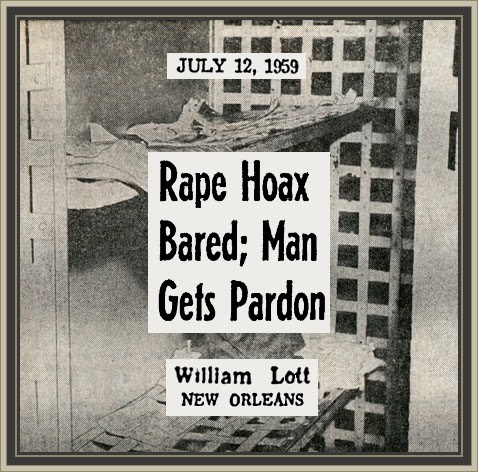 FULL TEXT: New Orleans – A 28-year-old barber college student, who pleaded guilty to rape “Because I didn’t want to gamble with my life,” was free from prison yesterday after an investigation showed she was innocent

William Lott, 28, received a pardon and restoration of citizenship from Gov. Earl K. Long Friday after spending a year in state prison.

The pardon  followed an investigation by District Attorney Richard Dowling. He ordered Lott’s case reopened when the girl involved was charged with filling a false report in another alleged incident.

In the case which led to Lott’s freedom, the girl told police she was beaten by a band of Negroes who tried to rape her. She later admitted the report was false.

Assistant District Attorney’s Walter Doane represented the girl as the complaining witness in the Lott case. Suspecting another hoax, he began checking. A special investigation proved the girl’s story against Lott was false, the District Attorney said.

Lott said he would try to effect a reconciliation with his wife, who divorced him as a result of the incident.