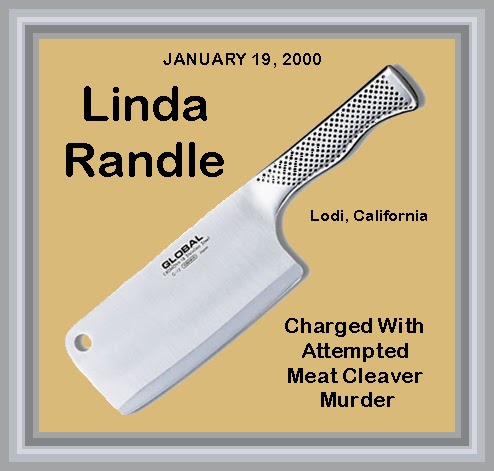 Lodi, California – On January 13, 2000, according to police, Linda Randle a 36-year-old nursing student, attacked a fellow classmate with a meat cleaver. The victim, a woman, was stuck on the elbow by the cleaver as she was getting into her car. The victim was able get into the car escaping further blows but Randle “continued her attack, shattering the vehicle's window.” The victim and a passenger managed to drive away. The victim was not seriously injured. She was treated at a nearby hospital and released.

The local newspaper the Stockton Record, reported that “Randle apparently was upset about a comment the woman made regarding the holiday, although the woman told police she was unsure what Randle was referring to.”

Ms. Randle was arrested and charged with assault with a deadly weapon. He was held in jail in lieu of $1,000,025 bail.