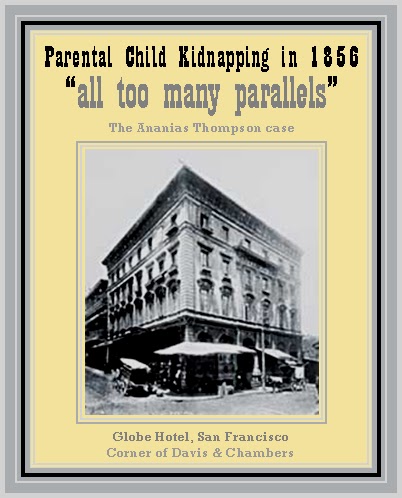 The following article is noteworthy for offering evidence, in its comment on the case of a Mr. Thompson, “which has all too many parallels in California,” suggesting that parental kidnapping was already, by the 1850s quite a common ocurrance in the United States

FULL TEXT (Article 1 of 2): We would call attention to an advertisement in another column, under the caption of “Information Wanted.”  Mr. Thompson has called on us, and told us his story. It is one which has all too many parallels in California, yet he is entitled to heartfelt sympathy. It seems that about five months ago, he sailed for China, leaving his wife and two children in San Francisco. Before leaving he gave his wife $375, with which to pay her passage by the steamer to New York, he expecting to return to China by Cape Horn. The vessel, however, and took passengers to this port. On arriving, Mr. Thompson first learned that his wife had not returned to New York, but was living at Vallejo with a man named John Forman, as his mistress.

Thither Thompson went, but found the parties had come to this city, some two weeks previous. He followed here, learned their arrival about that time, but could obtain no further certain clue to them. Partial information leads him to the belief that they went from here to Sonora. Mr. Thompson merely desires to recover the possession of his two children (girls), respectively six and eight years of age. John Forman, the despoiler of his happiness, is represented as being a ship caulker by trade; is a stout built man, about five feet six inches in height, with red whiskers.

The eldest child, Eliza, is of light complexion, blue eyes and has lost two of the lower front teeth. The youngest is of dark complexion and has a scar on the forehead. Any information of the parties will be thankfully received by Ananias Thompson (who appears to be as highly respectable man) at the Globe Hotel, corner of Davis and Chambers street, San Francisco.

NOTE: The comment “all too many parallels” indicates that parental kidnapping was already recognized as a “social problem” by 1856 in California.

Paragraph breaks not in original

FULL TEXT (Article 2 of 2): We published the other day a case of seduction and desertion, the aggravated party being Mr. Ananias Thompson. In the account we published, it was stated that the seducer was a person named John Forman. From the Bay papers it would seem that the recreant parties had separated, Mrs. Thompson, alias Mrs. Forman, having left her last paramour, a married man at San Francisco named Dougherty. Mr. Thompson learned the fact, applied at the police office for a warrant for her arrest for the purpose of recovering possession of his two little girls, but the papers state, [sic] he was informed that he could not testify against his wife, except in a case of assault and battery. He then obtained a friend, cognizant of the facts, to make the complaint, and the warrant was issued.