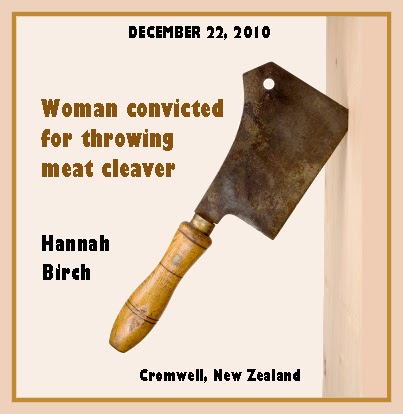 Cromwell, New Zealand – On May 16, Hannah Birch, 17, became furious following an argument with another person who identity has been withheld from the public. So Hanna threw a meat cleaver as her victim, missing him or her by just a metre. The cleaver struck a wall and embedded itself there. In Alexandra District Court on December 22, 2013, Judge Stephen O'Driscoll, in sentencing her stated that “made a mistake and was out of control when she attacked” and opined that the crime “was a one-off” and because of that he would go lightly on her. Ms. Birch’s lawyer, Tim Cadogan said his client had been doing her best at becoming a better person and her career prospects would be limited if she was convicted and asked that the court forgo sentence in order to keep her record clean. The judge however declined to forgo sentencing and gave her a 12 month suspended sentence.