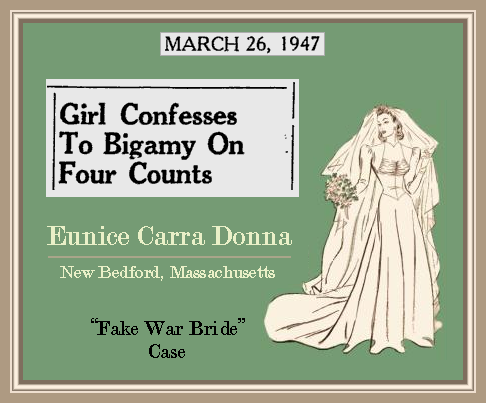 FULL TEXT: Philadelphia, March 26 – A 29-year-old brunette admitted at a federal hearing that she had married six times, four bigamously – but hubby No. 6 insisted today “I love her and I’m sticking by her.”

Mrs. Eunice Carra Donna, was held in $1,000 bail by U. S. Commissioner J. Norman Griffin for a further hearing Thursday.

FBI agents said she divorced Chauncy Mauray, her first husband, then was wed to Nicholas Carra Donna in Boston – and legally still is.

Hubby No. 6, Paul H. Schwartz of Lehighton, Pa., an engineer and navy veteran, told Griffin he wants to help her.